By the early 1930s, as the Great Depression settled down like a chilly fog over the Atlantic seaboard and the salt-fish trade, Bluenose fell on hard times. Trading on the vessel's already well-established celebrity, The Bluenose Schooner Company decided that there was money to be made in touring it as one of the last, and the greatest, of the legendary 'salt-bankers'.

Beginning in 1932, Bluenose was available for charter cruises, a role that it carried out intermittently for the next several years, mostly in the Halifax area and along Nova Scotia's South Shore. There were some notable exceptions to the touring schedule, however, as the vessel took on a role much larger than that of quaint fishing schooner available for fair-weather day-sailing.

In 1933, for example, Bluenose was invited by the Government of Canada to represent the country at the Century of Progress Exposition (World's Fair) in Chicago. This developed into an extended tour up the St. Lawrence River and into the Great Lakes, with stops at Montreal and Toronto. (See next chapter for additional images and information.) A new company, Lunenburg Exhibitors Limited, was set up to finance these ventures, with W.H. Smith (of Smith & Rhuland) as the president.

Promotional products, including a souvenir booklet (see chapter 'The Story of the Bluenose, 1933') and a puzzle, were produced for sale to raise funds for the tour, and commercial sponsors were secured to underwrite some of the expenses, in return for the advertising value and good-will which Bluenose would bring. The Halifax Herald, as always, was supportive of Bluenose as a traveling representative for Nova Scotia and its seafaring traditions, and featured the schooner's adventures prominently in the Halifax press.

In 1935, in what was perhaps its most significant role as an international ambassador, Bluenose sailed to England to represent Canada once again, this time at the Silver Jubilee of King George V and Queen Mary. The King, elderly and too frail to come aboard the Bluenose, instead formally received Angus Walters on the Royal Yacht Victoria and Albert, and acknowledged the schooner's presence by observing that it was "a vessel of considerable merit typical of the spirit of Nova Scotians."

On the return voyage from England, Bluenose was almost lost in a violent September gale in the English Channel. Two hundred miles out from Falmouth, a huge sea hit the vessel and hundreds of tons of water crashed down, flooding the compartments. Ten passengers were on board, including five women who were not allowed above deck during the storm. They were down below, accordingly, entertaining themselves with a gramophone player, and had just put on a recording of the popular song 'Anything Goes' when the tremendous sea struck: "Amazing as it may seem, the gramaphone, propped securely in a bunk, continued playing, but sounding a strident note to the women who at that moment thought they were doomed." Bluenose spent an eternity of several minutes rolled over completely to leeward, then slowly righted itself and sailed on through the storm. 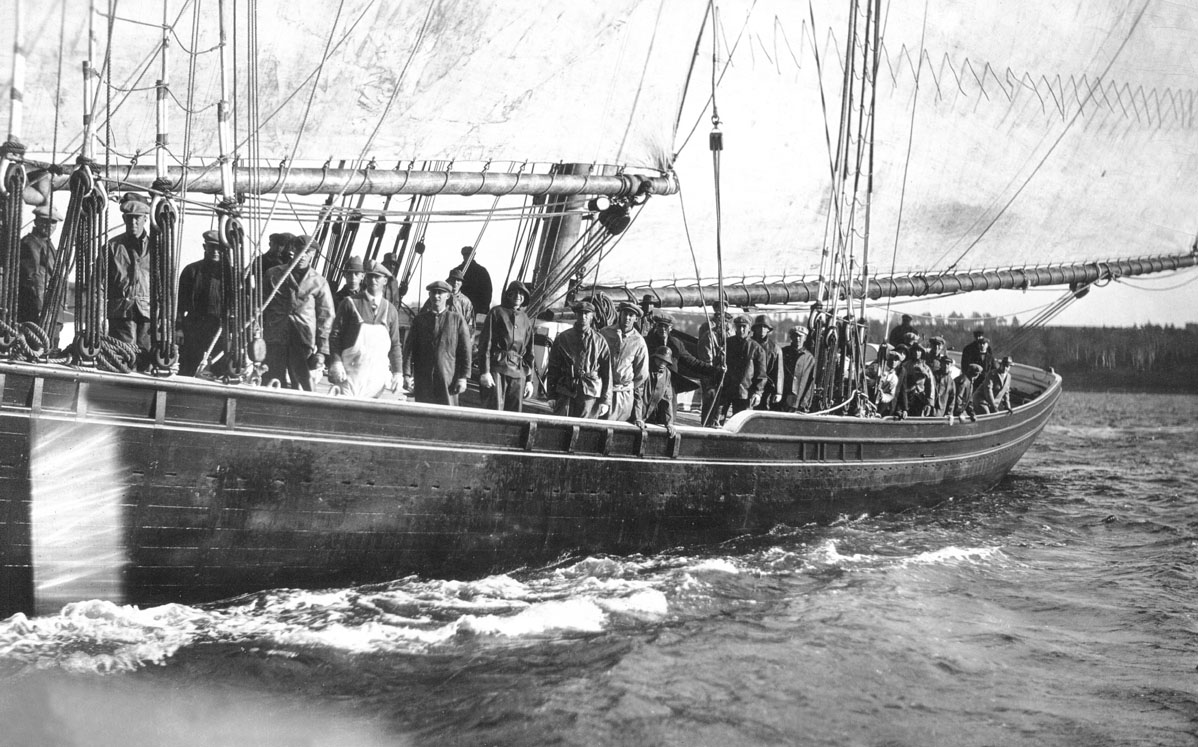 Crew and guests on board Bluenose 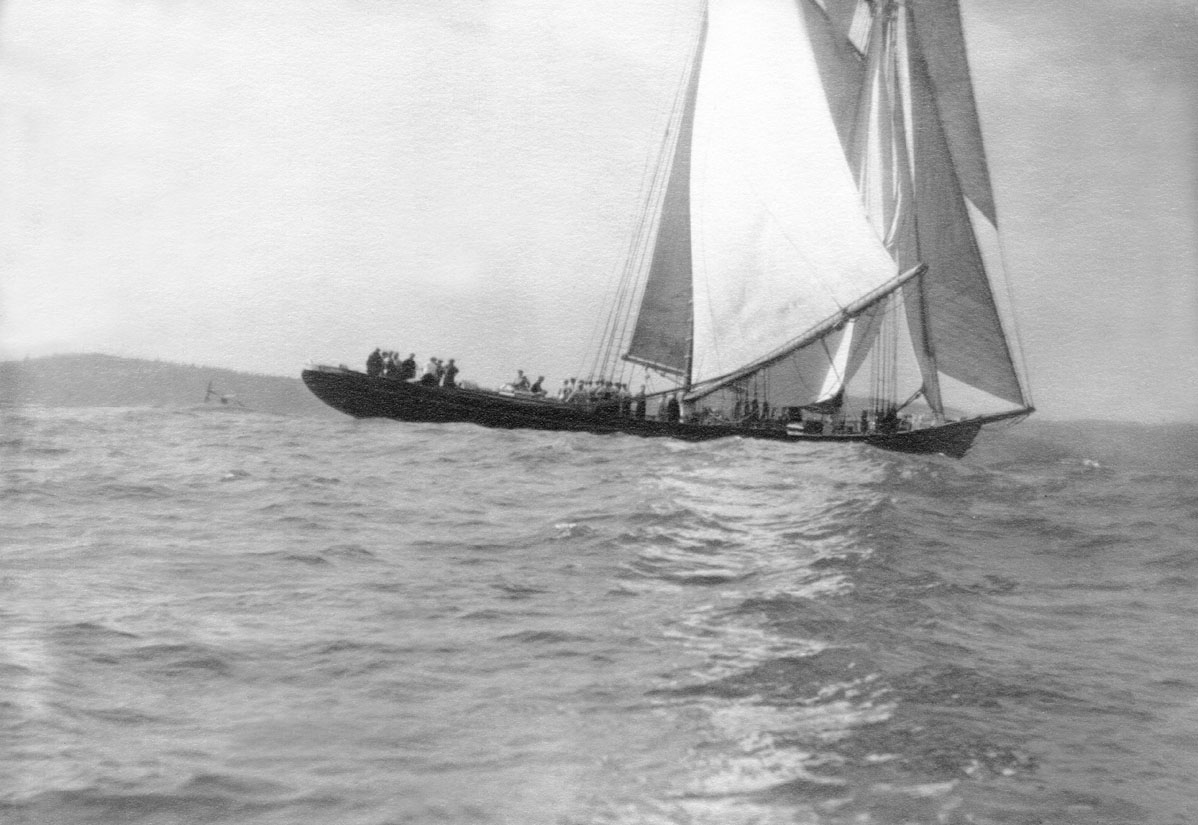 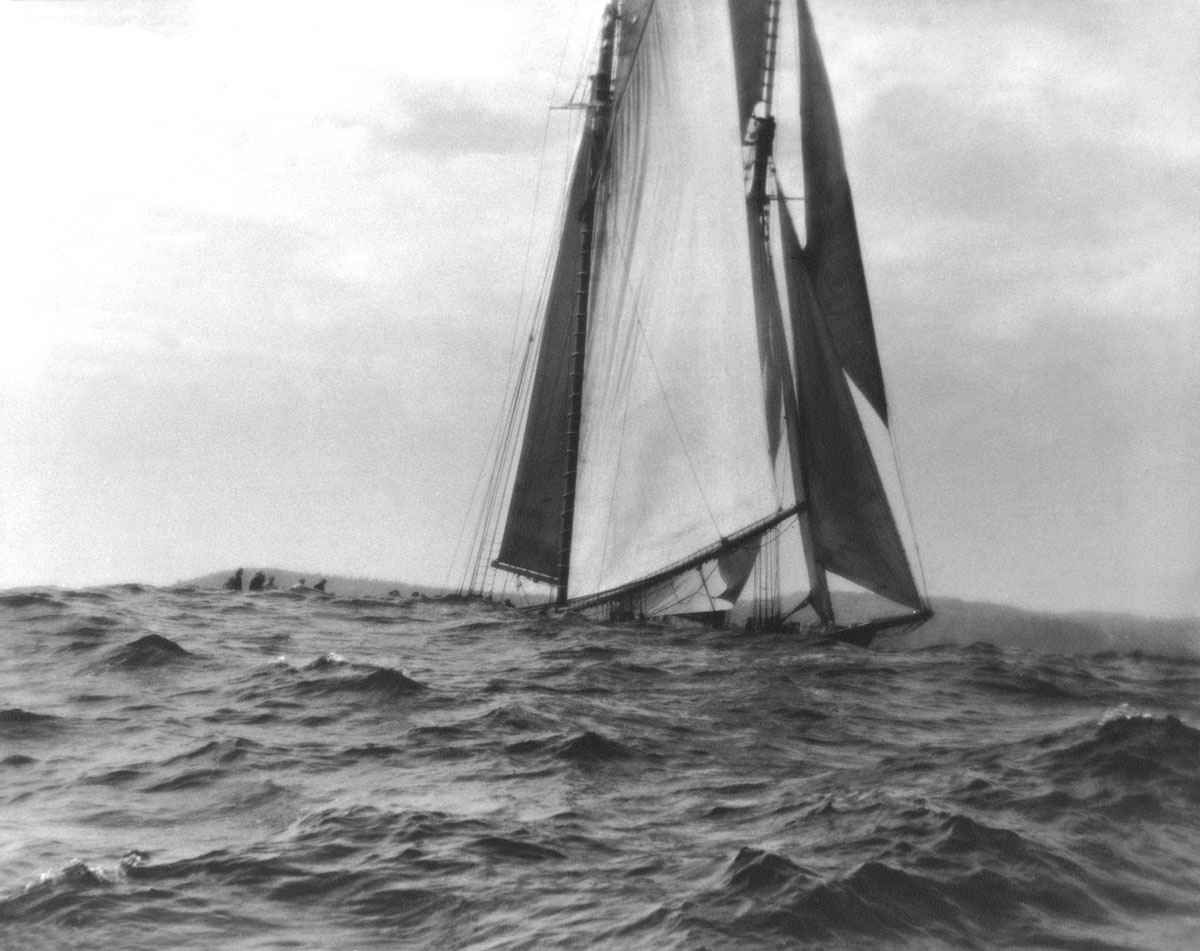 Bluenose in a Seaway

The Bluenose Sails for Chicago 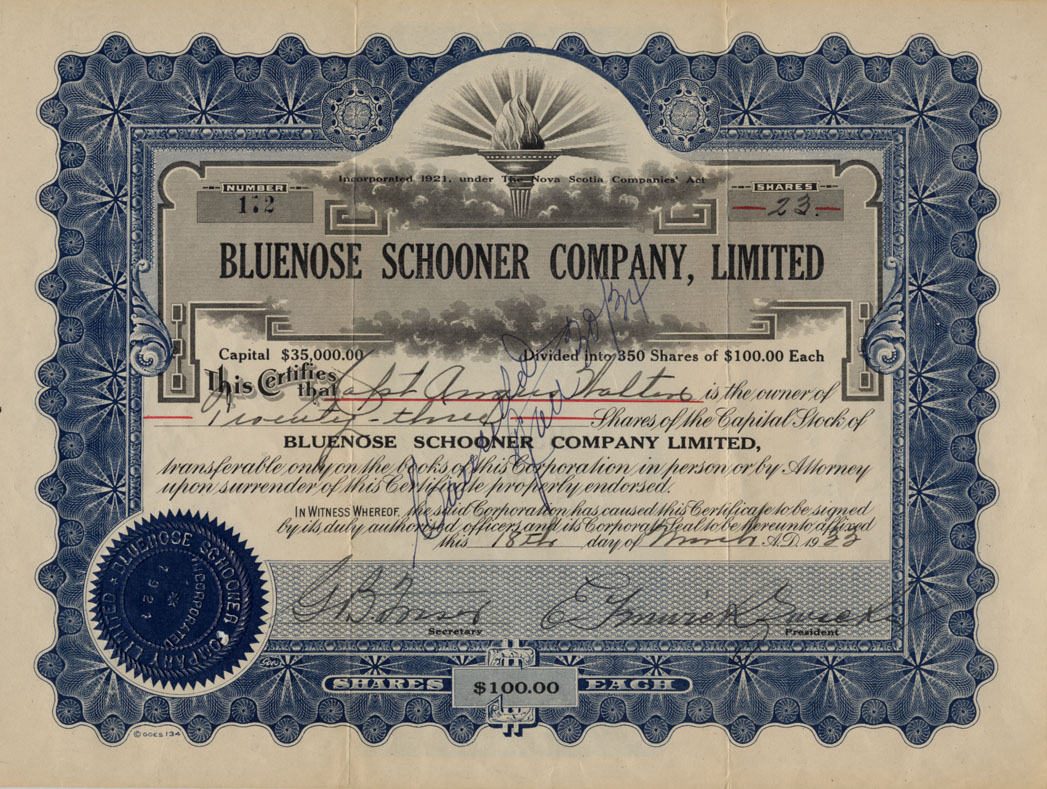 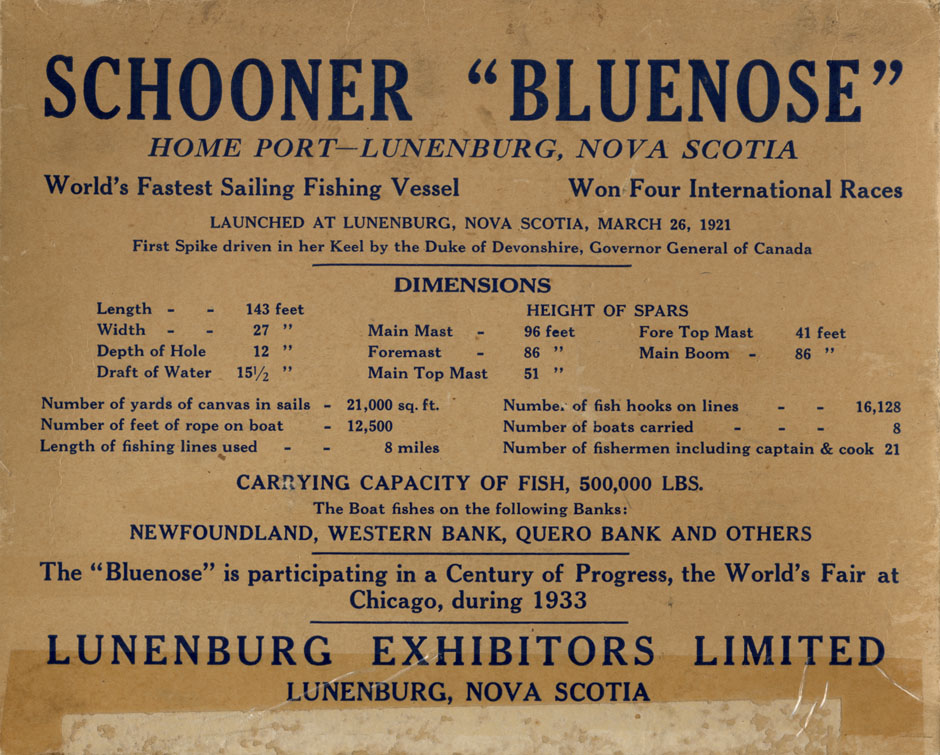 Cover of the Bluenose Puzzle Box 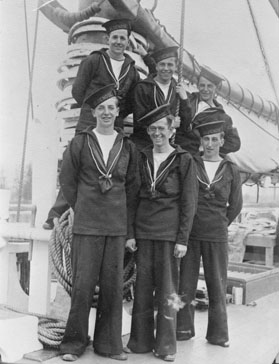 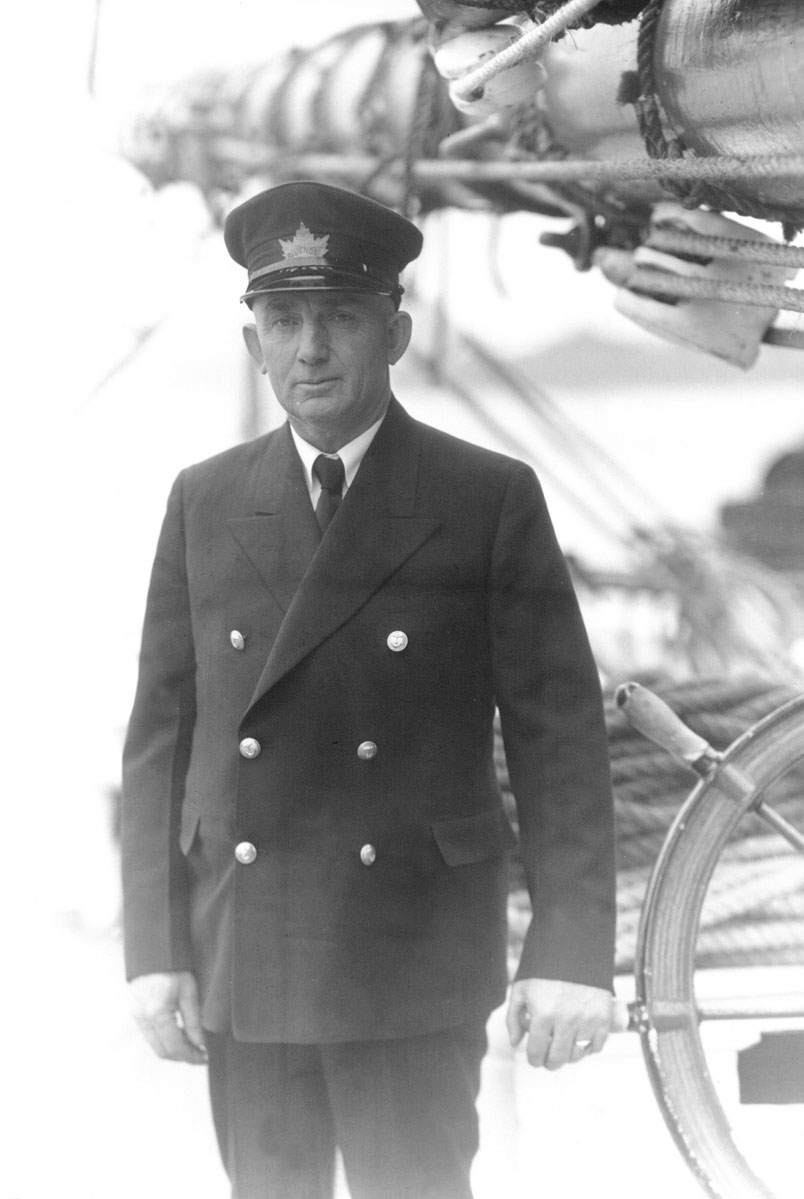 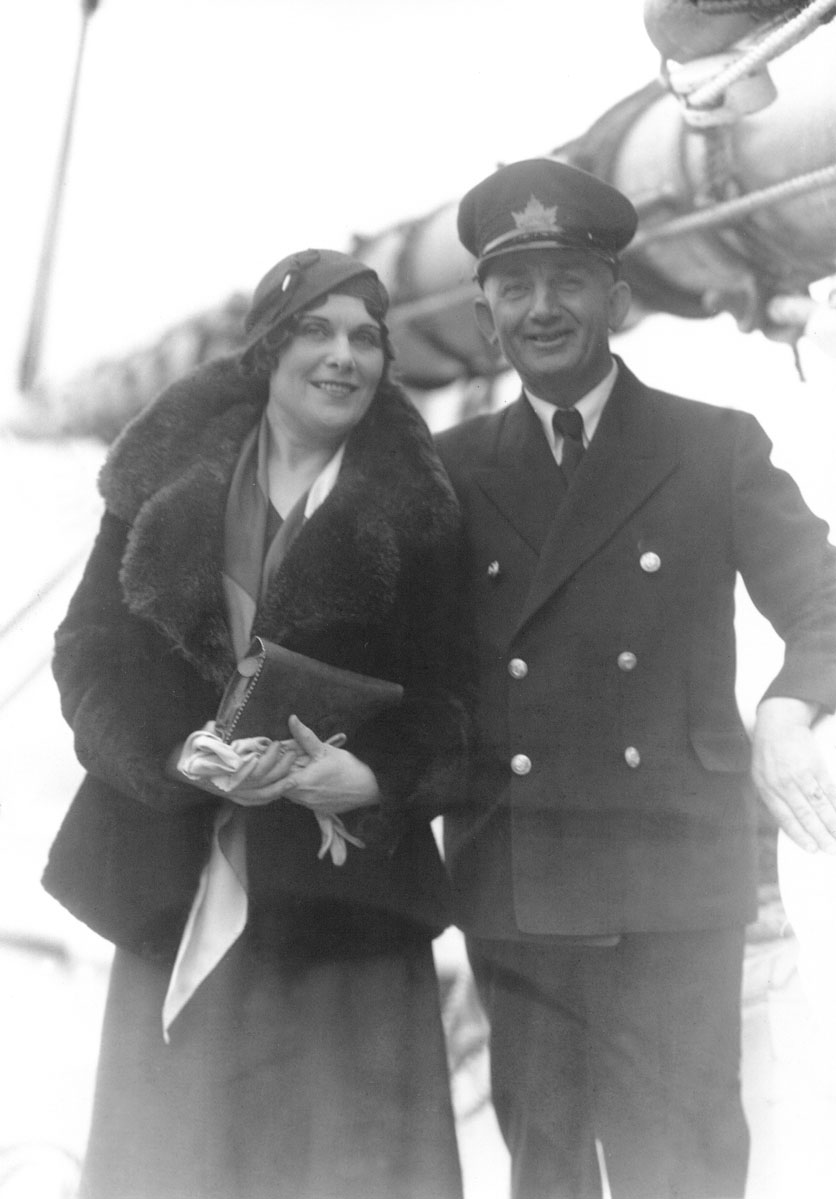 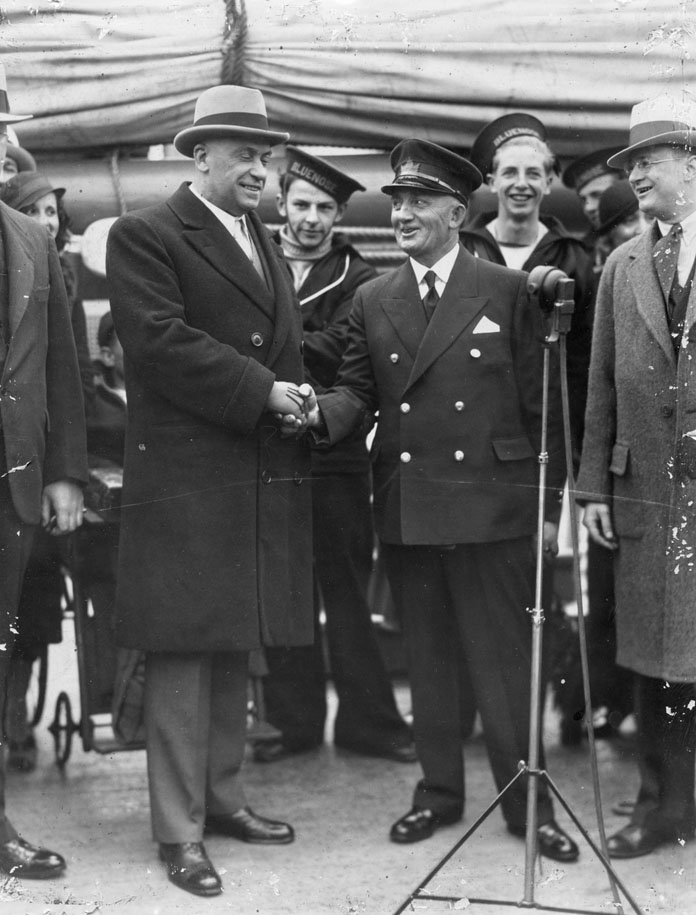 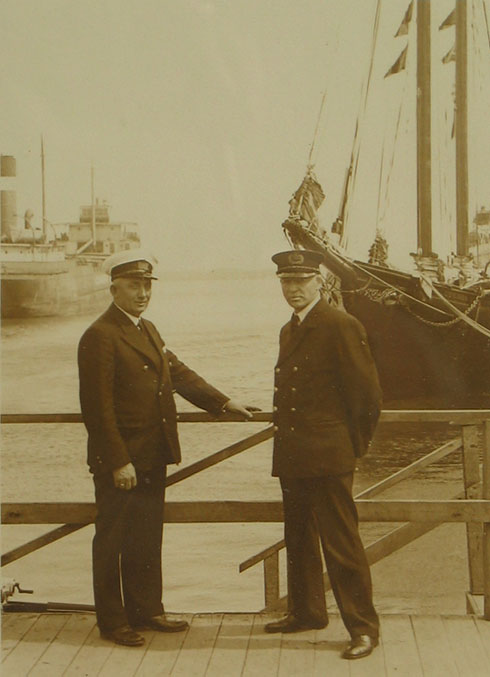 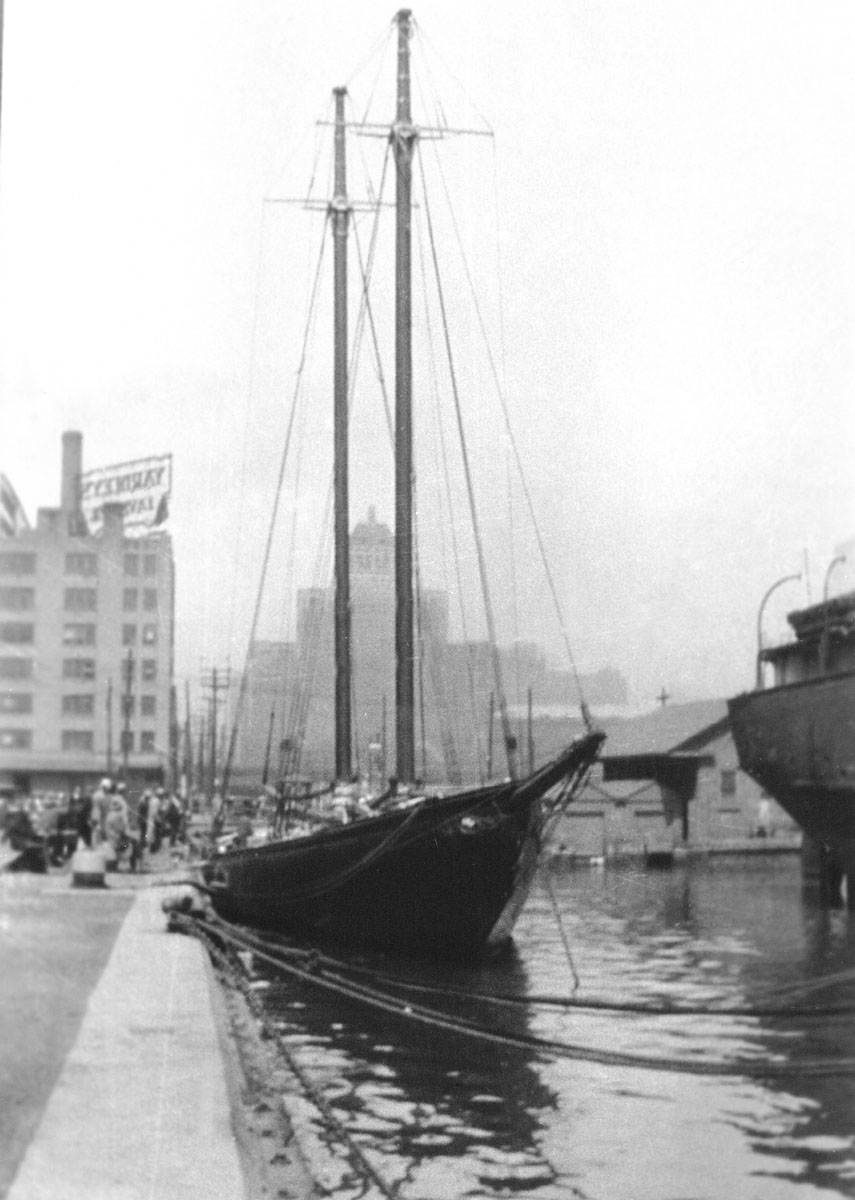 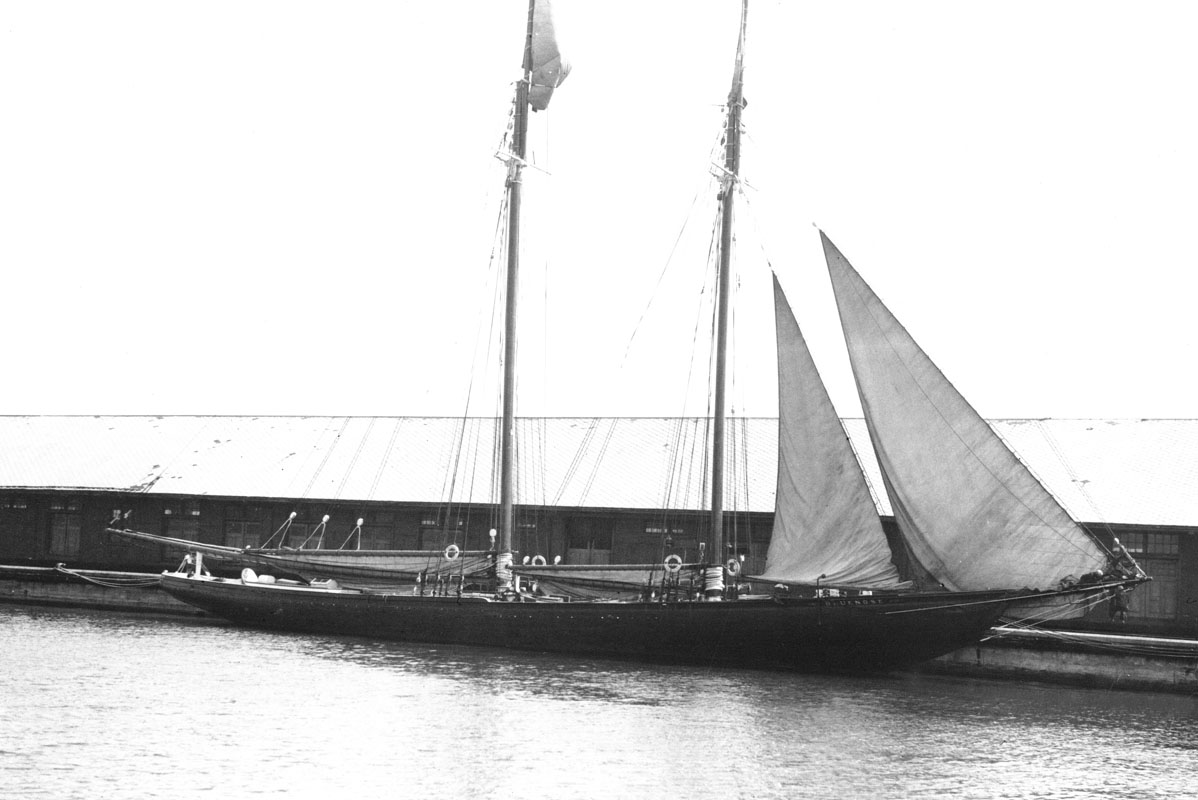 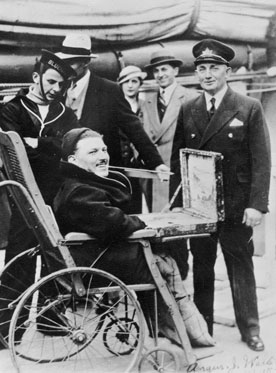 Earl Bailly with crew on board Bluenose, Chicago, 1933