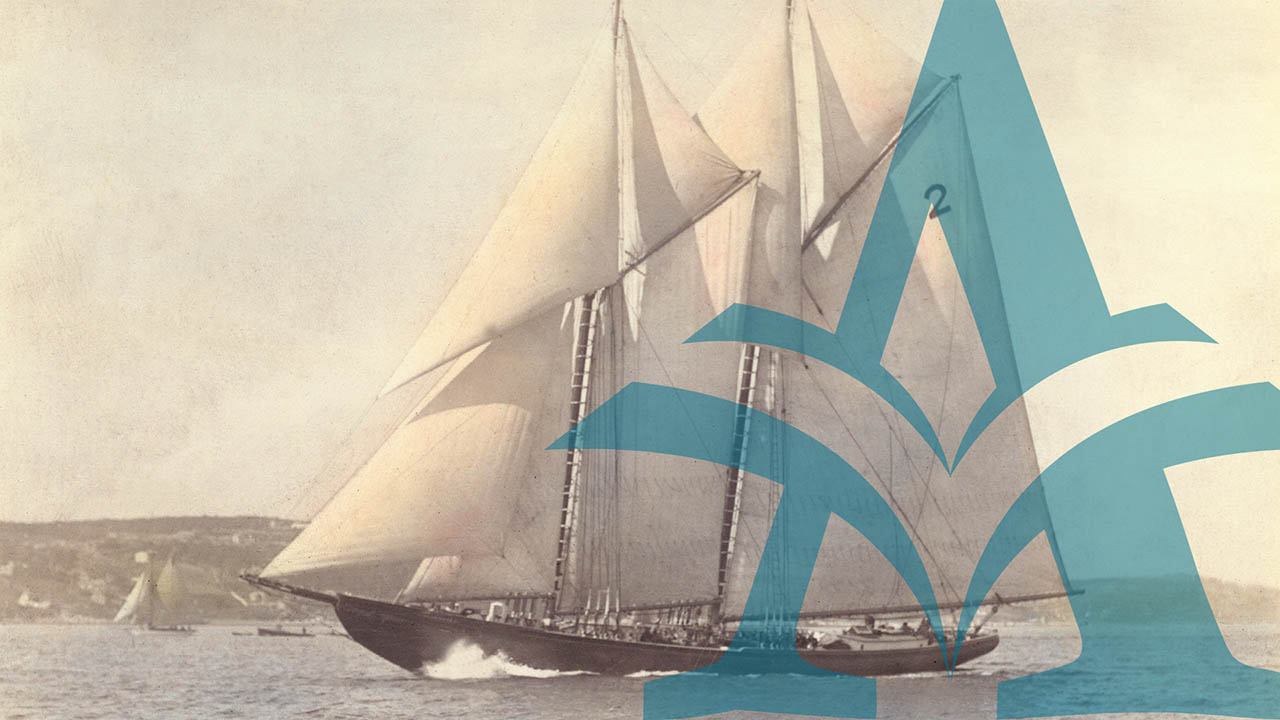 From the day Bluenose was launched on 26 March 1921 in Lunenburg, Nova Scotia, the Grand Banks fishing schooner has been a vessel larger-than-life, its sails cut and sewn with the fabric of legend, its crew a breed of rugged, hardy, seafaring men. Much was expected then from both vessel and crew — and much has been delivered in the eight decades since launch day.

Then as now, the press knew a good story when they saw one; no sooner had Bluenose won its first International Fishermen's Race in October 1921 than local and international newspapers seized upon the excitement of victory. They immediately understood that this was no ordinary fishing vessel, and that the potential for marketing and exploiting the schooner was endless.

Over the years, Bluenose has been a symbol for many things. In the 1920s, it represented Nova Scotia's prominence in the fishing industry and international trade. Its unmistakable grace, elegance of design and efficiency under sail were advertisements for the architect, William J. Roué, and for the superb workmanship of Nova Scotia shipwrights. The captain, Angus Walters, and his crew were world-famous, admired for their spirit of adventure, their courage, and for their resourcefulness in the face of unrelenting danger at sea.

In the hard times of the 1930s, Bluenose reinvented itself. With all the dazzle of a carnival queen, the schooner became a showboat, trading on its fame and visibility, available for public cruises — and for any advertising opportunity that sailed by. In 1933 it represented Canada at the 'Century of Progress' World's Fair in Chicago, and in 1935 it sailed to the Silver Jubilee of King George V in England. Everywhere Bluenose went the press followed, culminating in the last Fishermen's International Races, revived in 1938 off Boston and Gloucester, Massachusetts, where it was once again victorious.

After 1938 there was no more glory. Despite efforts to have the vessel preserved as a 'national institution', Bluenose was sold out-of-country and became a tramp schooner in the Caribbean; it was wrecked off Haiti in 1946, but never forgotten. Angus Walters remembered; so did the crew members, other Lunenburgers, Nova Scotians in general, and admirers all over the world — every one of them in love with Bluenose's elegance, audacity, elusive mystique, and with its unbeaten record as Queen of the North Atlantic Fishing Fleet.

Like a ghost ship, in 1963 Bluenose returned. A replica schooner endorsed by Angus Walters and William Roué, Bluenose II was built in Lunenburg by Smith & Rhuland in yet another marketing venture. This time it was financed by Oland Brewery, built specifically to advertise their products — while at the same time promoting Nova Scotia's maritime heritage, tourist appeal and business potential. In 1971 the schooner was gifted to the Government of Nova Scotia. In the years since then its role as floating ambassador for the province has been consistent.

Looking back, not much has really changed in the eighty-plus years since Bluenose was launched in 1921. Both vessels have always represented a fixed time, place and way of life — specifically, the great Age of Sail in Nova Scotia and the traditional seafaring existence of a maritime people. Both vessels have also been marketed and promoted by corporate interests — The Halifax Herald, Oland Brewery, the Government of Nova Scotia — for purposes far beyond the primary role of the first Bluenose as a gritty little salt-bank schooner.

In the final analysis, whether all of this is 'anti-modernism', highly romantic sentimentality, or the commodification of cultural heritage, is irrelevant. Both Bluenose and its successor have always been larger-than-life, both iconic and mysterious in the pull they exert over those who are intrigued by the sea and the seafaring experience.

This virtual exhibit presents more than 350 images — heritage photographs, original documents, charts and miscellaneous items relating to both Bluenose and Bluenose II. The final product is the result of a collaboration between Nova Scotia Archives (Halifax, NS), the Maritime Museum of the Atlantic (Halifax, NS) and the Fisheries Museum of the Atlantic (Lunenburg, NS). Thanks are extended to the staff of the two museums for the spirit of cooperation which made the project possible.

The exhibit brings together the best of three separate collections to tell the stories of Bluenose and Bluenose II, the people who sailed them and the times in which they lived. Most of all, this is about how a small, intrepid Grand Banks fishing schooner and its replica have sailed into our collective memory and have secured a safe berth there, not just as images on a long-ago postage stamp or the everyday Canadian dime, but as a living part of our larger Canadian identity.