Although Lunenburg has traditionally been famous for its fishing fleet, it was not always thus. Charles Morris noted, for example, in his Description and state of the new settlements in Nova Scotia (1761) that Lunenburgers "have no inclination for the Fishery tho' well situated for that purpose."

Anthony Lockwood, however, writing a half-century later in his Brief Description of Nova Scotia (1818), marked the community's transition from land to sea: "Vessels of different descriptions are now constantly plying between this settlement [Lunenburg] and Halifax, carrying to market, chord-wood [sic], lumber, hay, cattle, stock, and all kinds of vegetables." Oddly enough, the one commodity he did not mention was fish.

A decade later, Captain Moorsom noted that "Fifteen square-rigged vessels are owned in the port, besides a multitude of small craft. Their trade consists in exports of fish and some lumber to the West Indies, and a very considerable coasting traffic with Halifax and Newfoundland, in farming produce."

A century later, in 1927, Douglas Ewart Hamilton, in his book The Maritime Provinces, described a community at the height of its dialogue with the sea, noting in particular the harbour, where one could see "at anchor a hundred big schooners and more, all rigged alike and all painted black, and all shifting and dipping their bows in unison in obedience to the dictates of tide and wind and wave."

McAlpine's Gazetteer for 1919 reported that the town and county combined had 200 vessels with a total tonnage of over 20,000 tons, and that over 3000 men were employed in the Banks fisheries. The Gazetteer correctly noted that Lunenburg was "The chief fishing port or Gloucester of Canada, having the largest fishing fleet in the Dominion...." The Atlantic Gazetteer and Industrial Directory for 1939 not only echoed the earlier comment in calling Lunenburg "the chief fishing port of Canada," but also added a new and significant distinction won during the 1930s — namely that Lunenburg was the "home of the Fisherman's International Championship Racing Schooner, 'Bluenose,' Capt. Angus Walters." 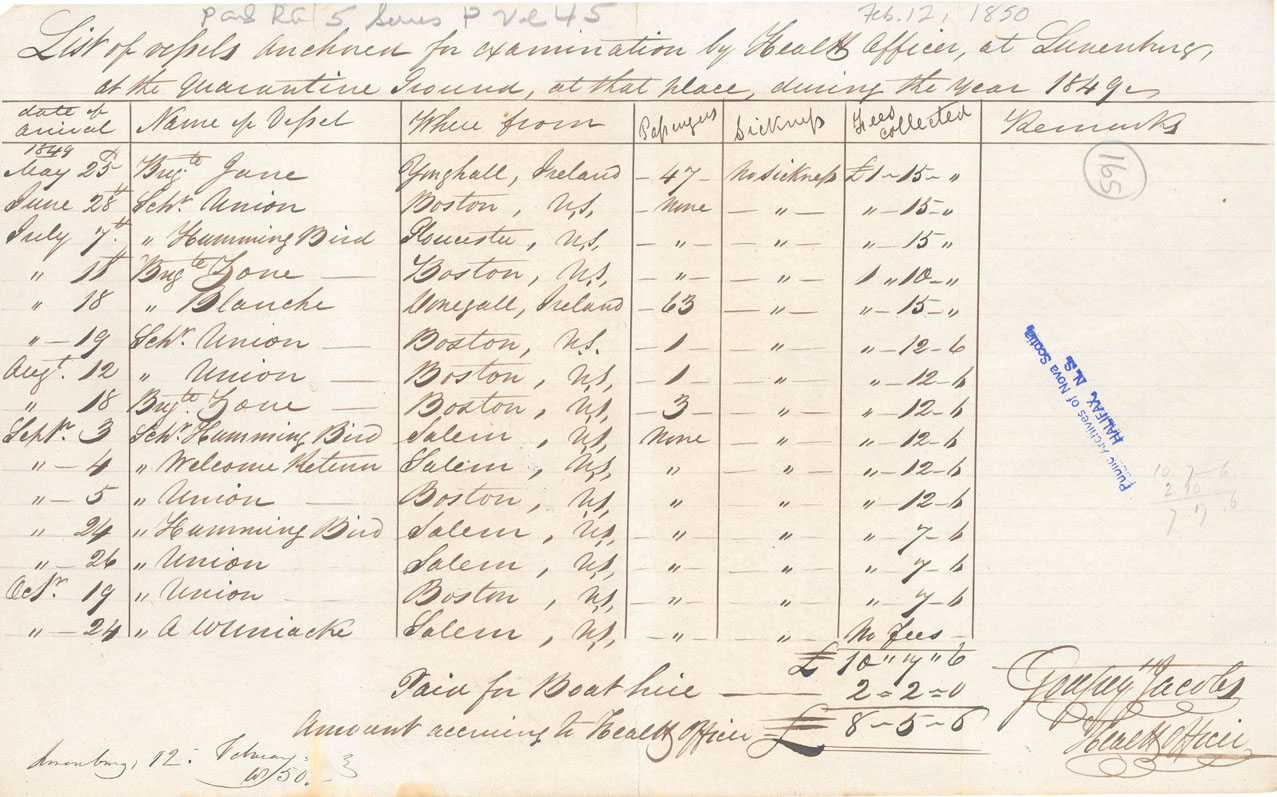 "List of vessels anchored for examination by Health Officer at Lunenburg at the Quarantine Ground, at that place, during the year 1849." 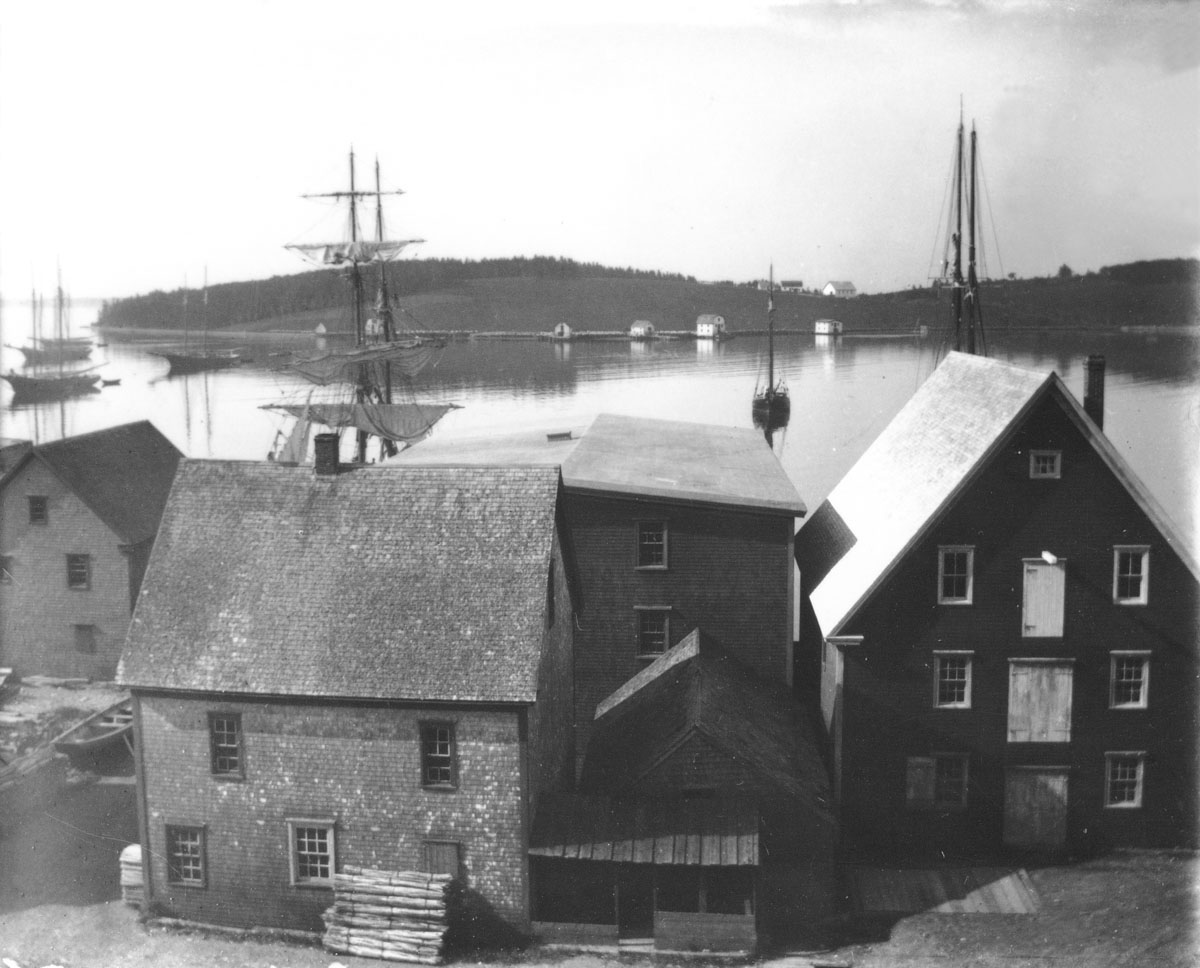 View of Harbour with buildings in foreground 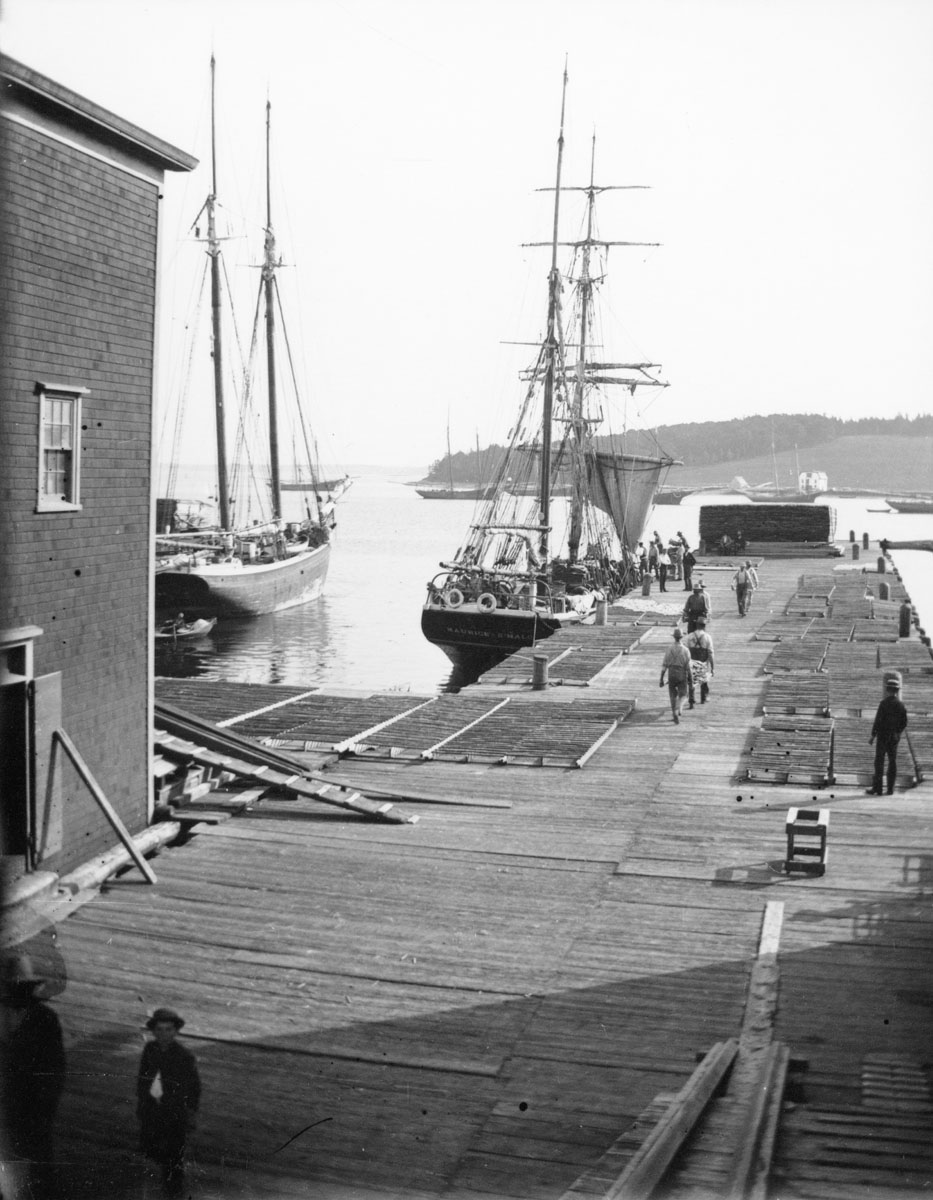 Schooners at wharf and nets drying 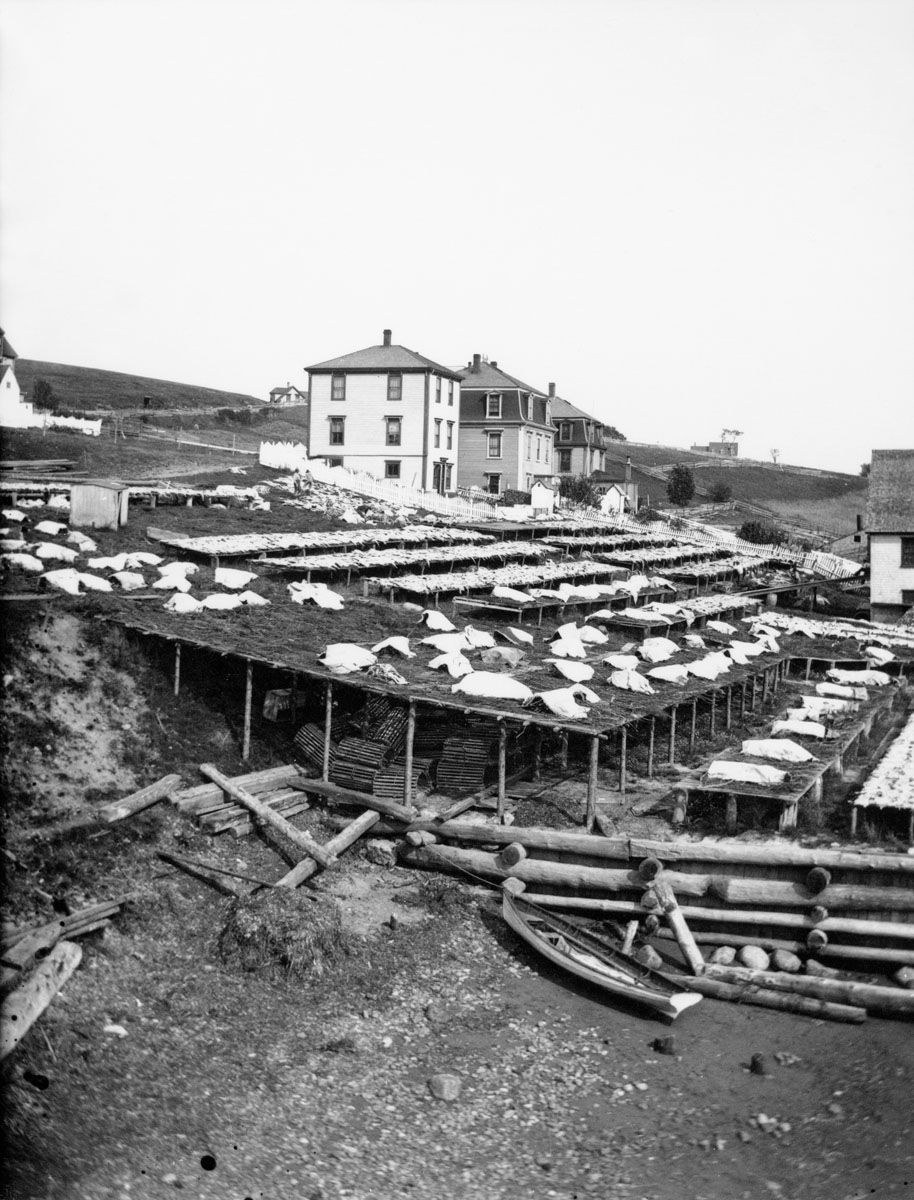 View of fish drying on flakes 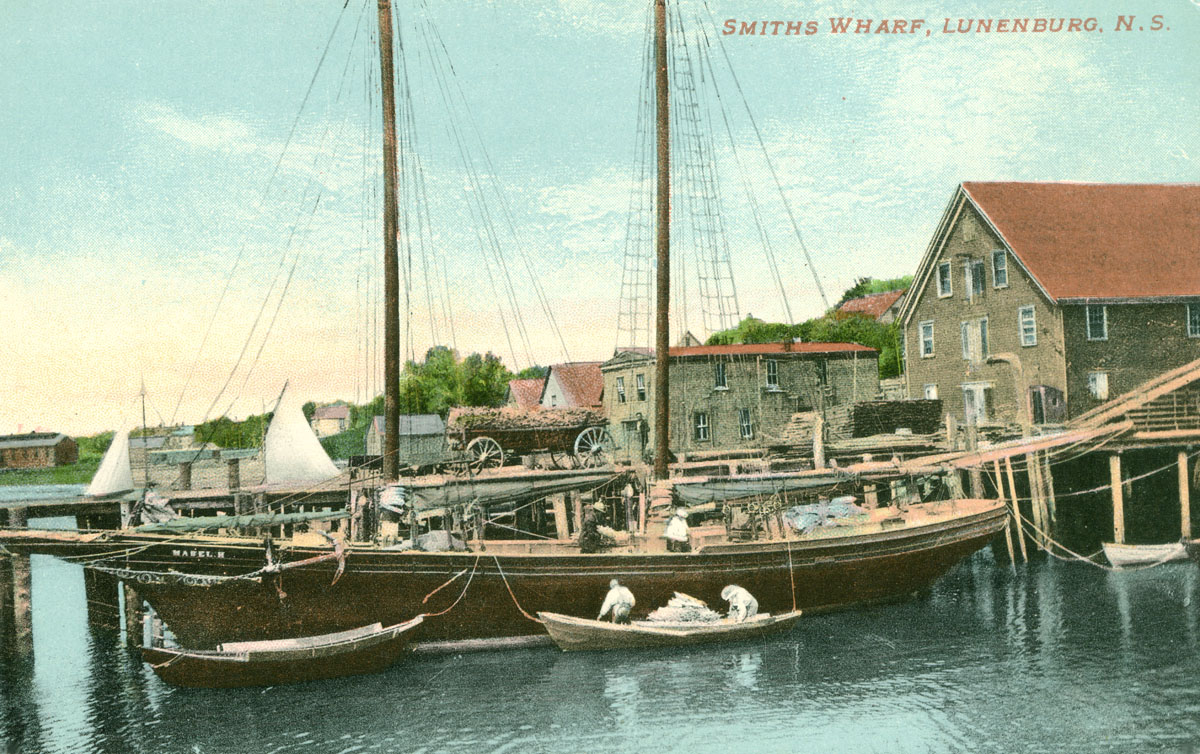 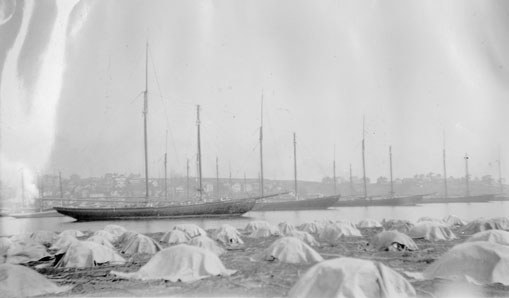 Covered fish drying on flakes at the waterfront 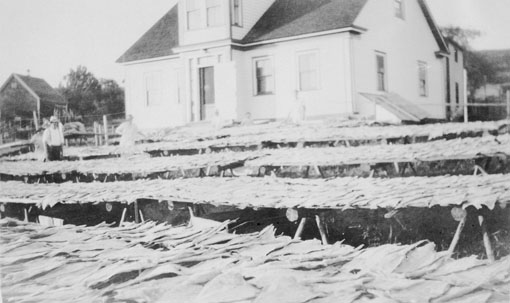 Fish drying on flakes in front of house 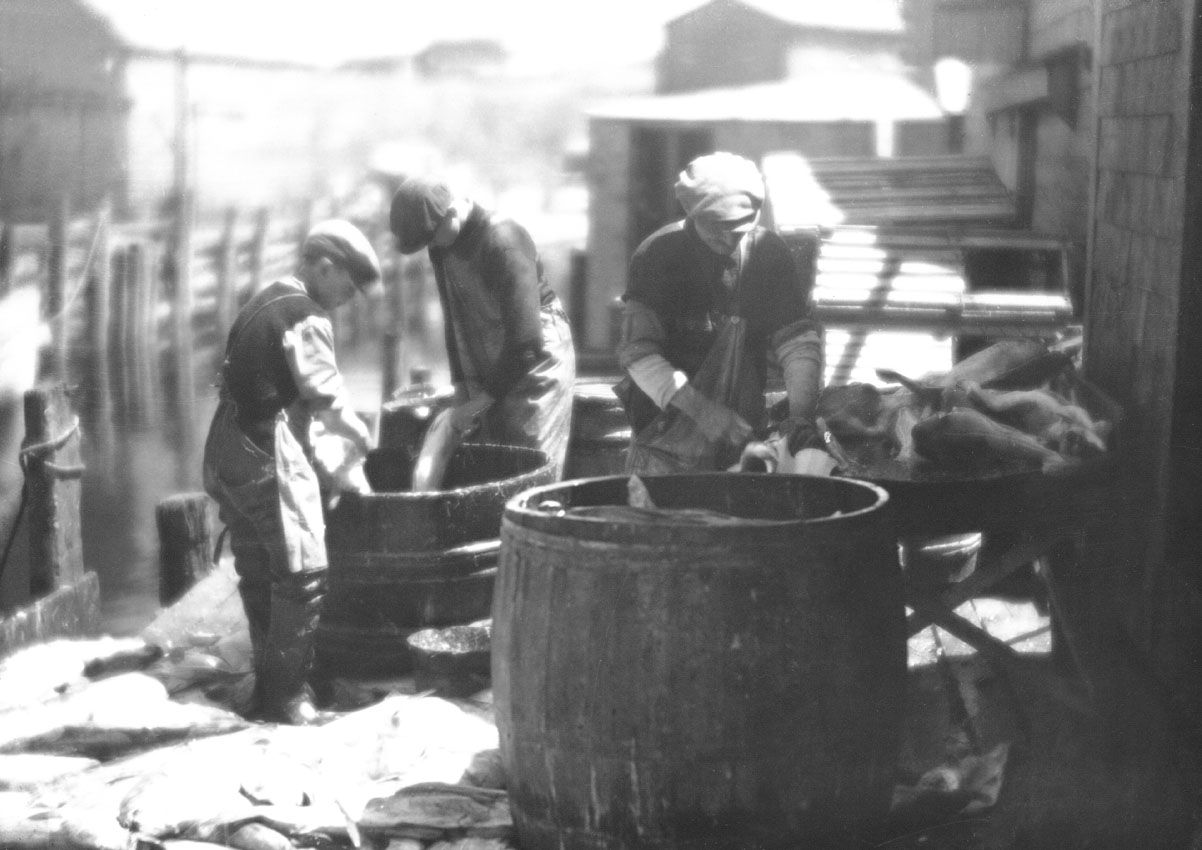 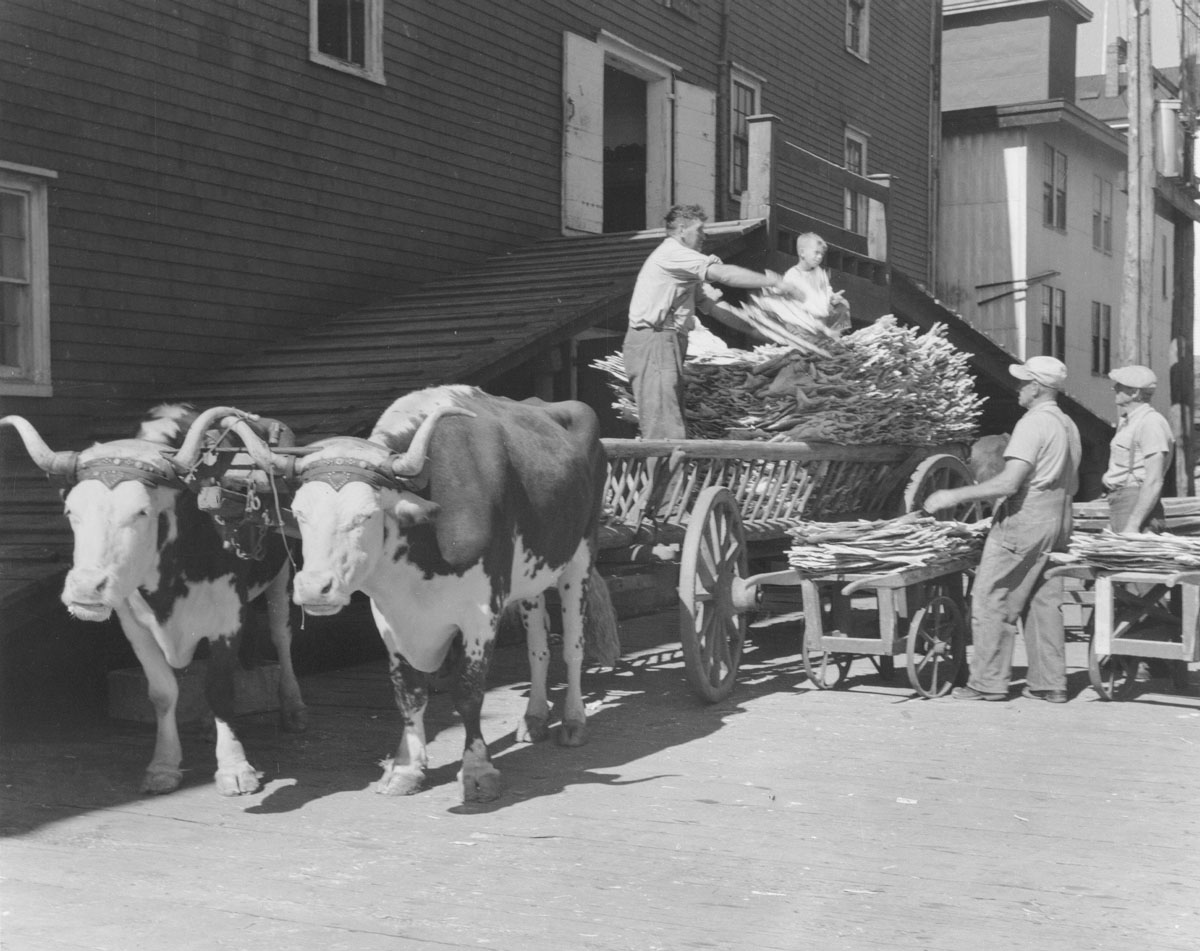 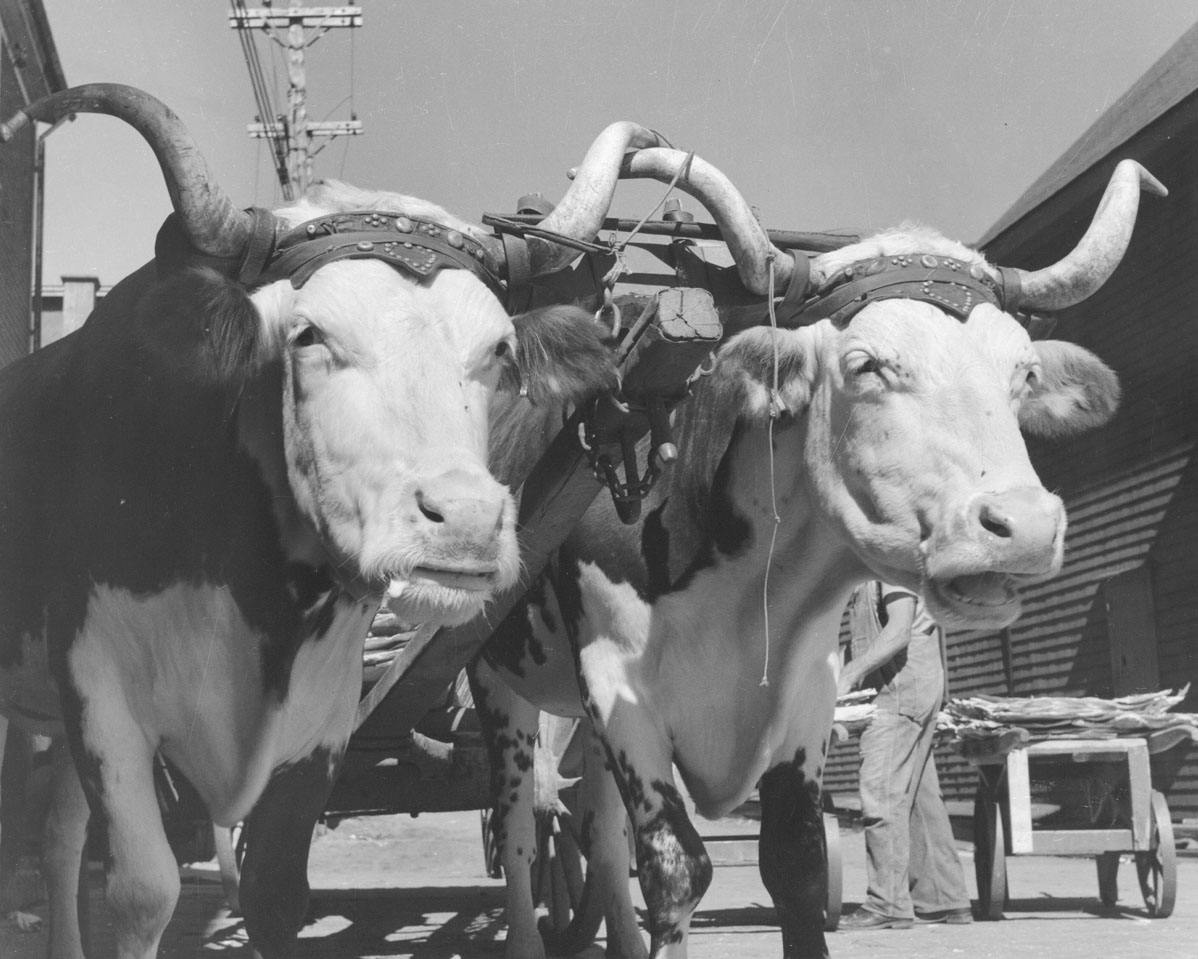 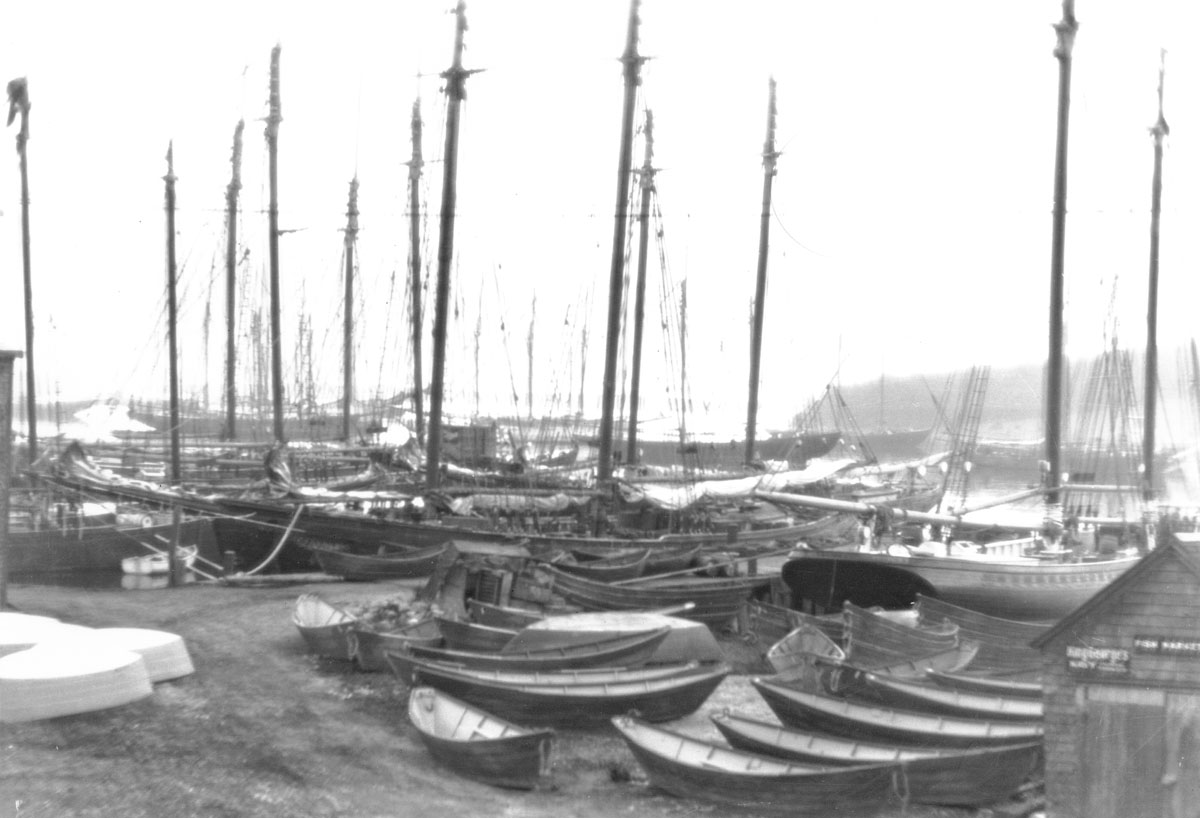 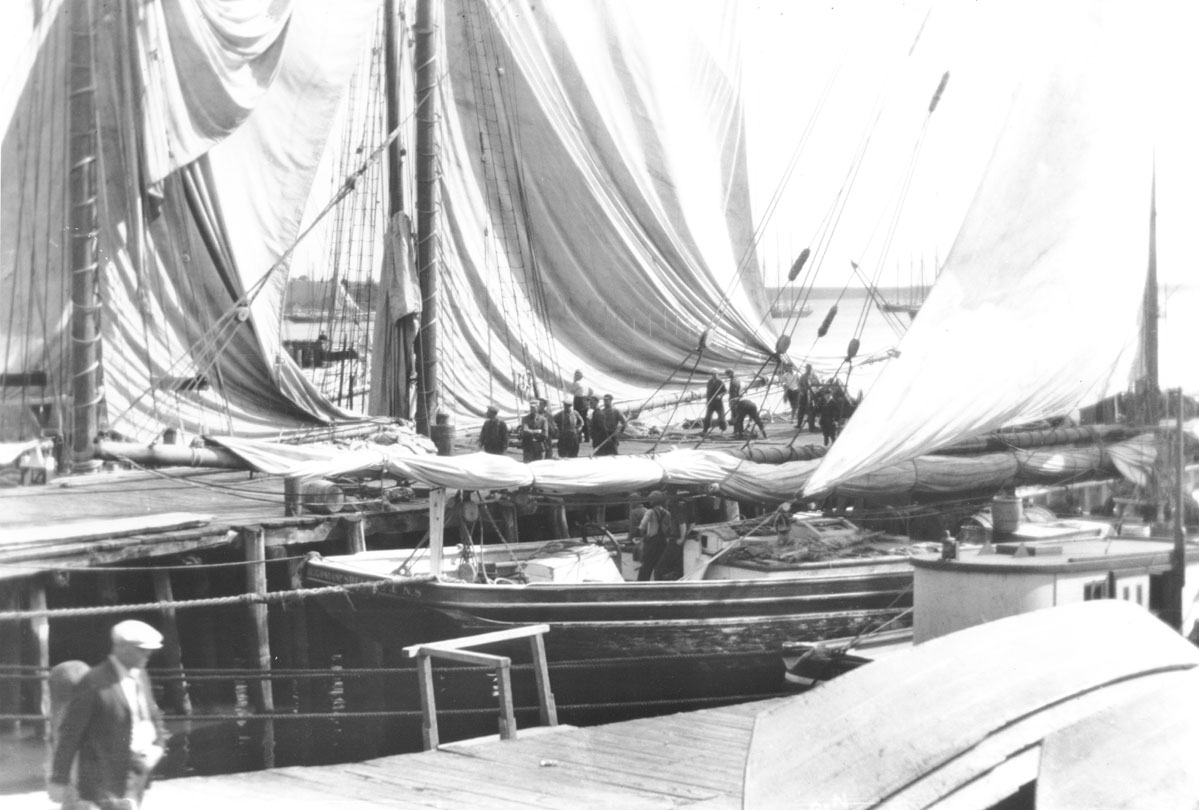 Sails drying at the wharf 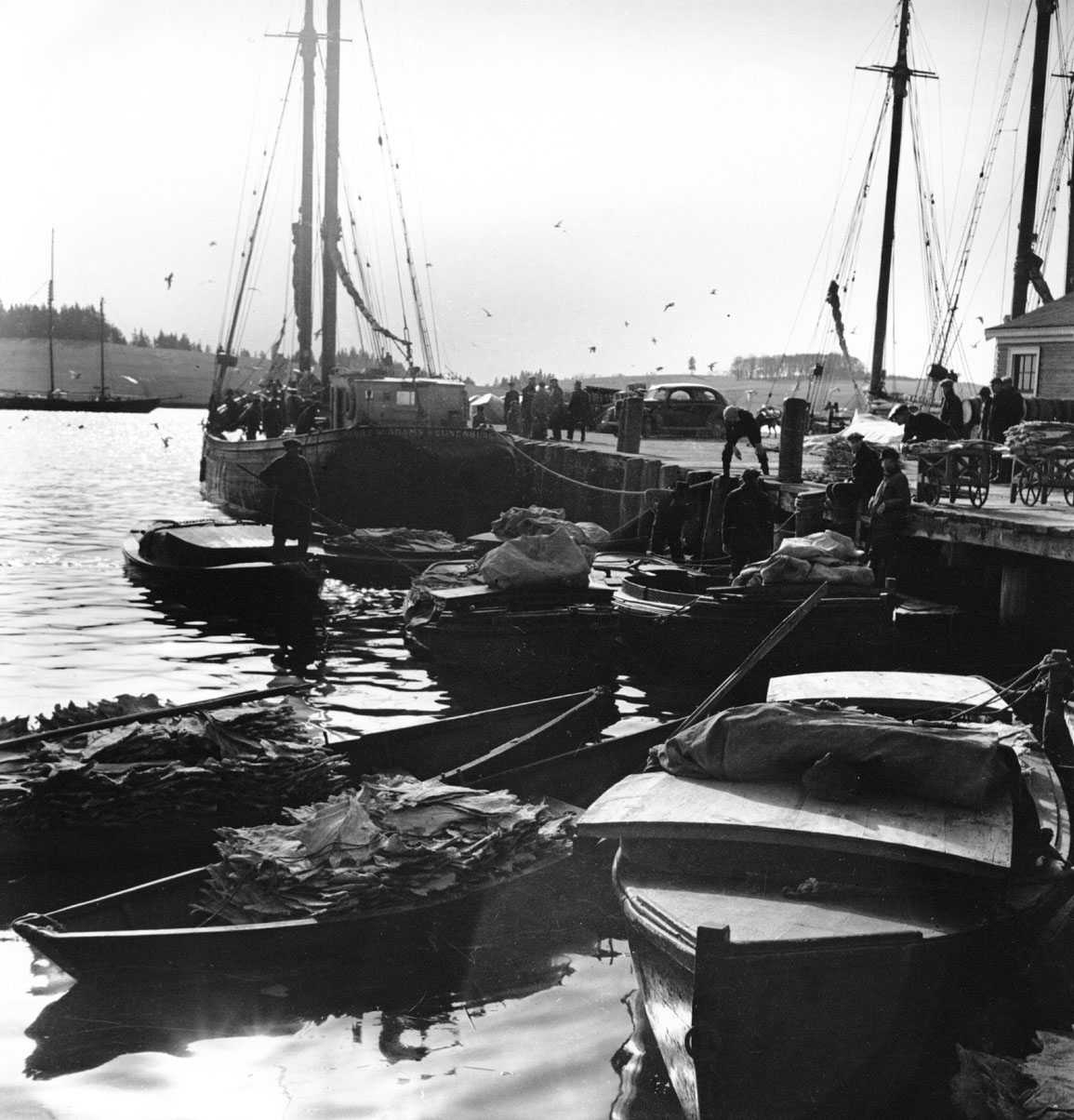 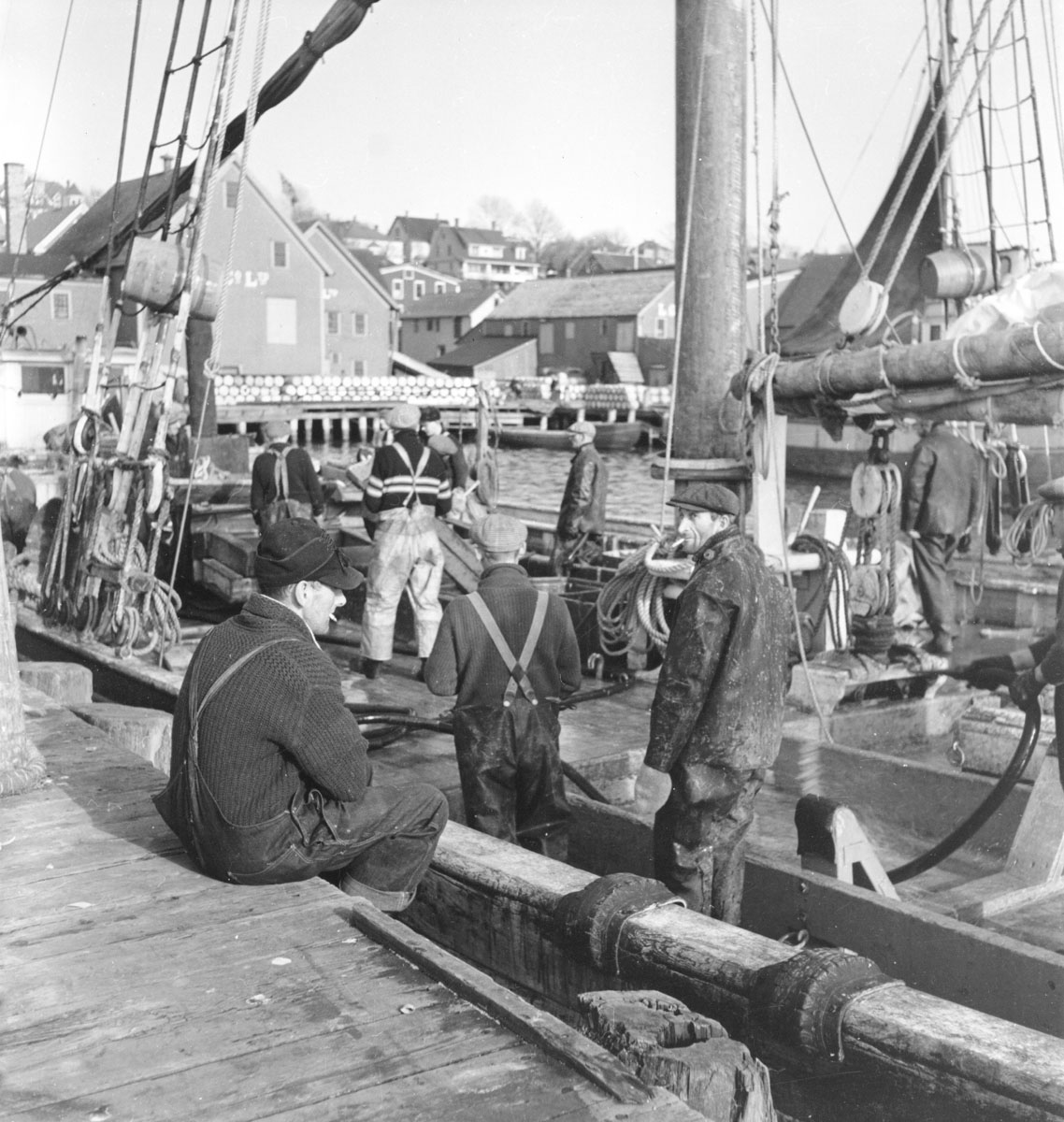 Men on deck at the wharf