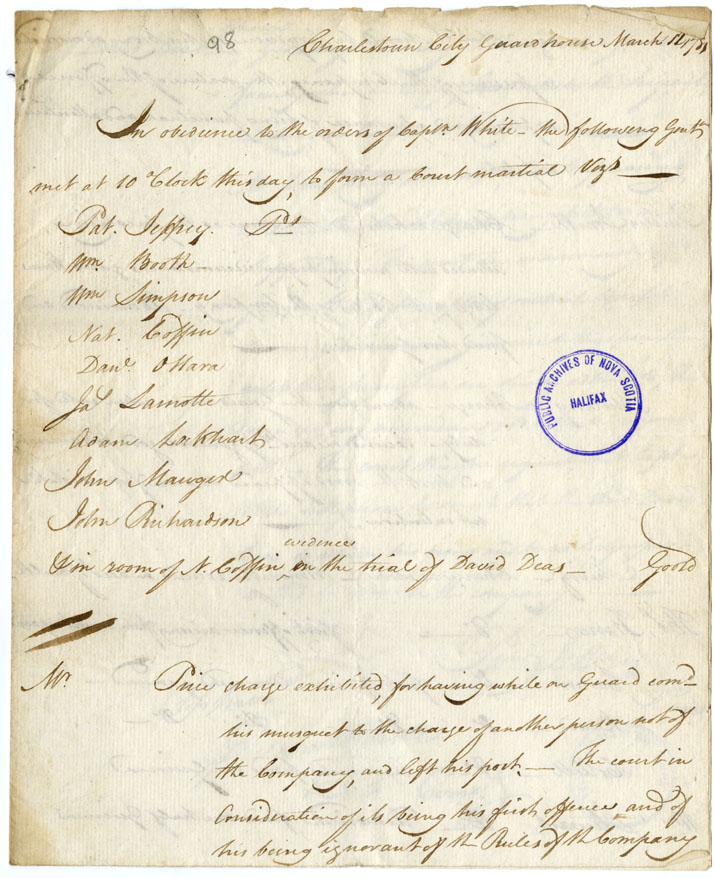 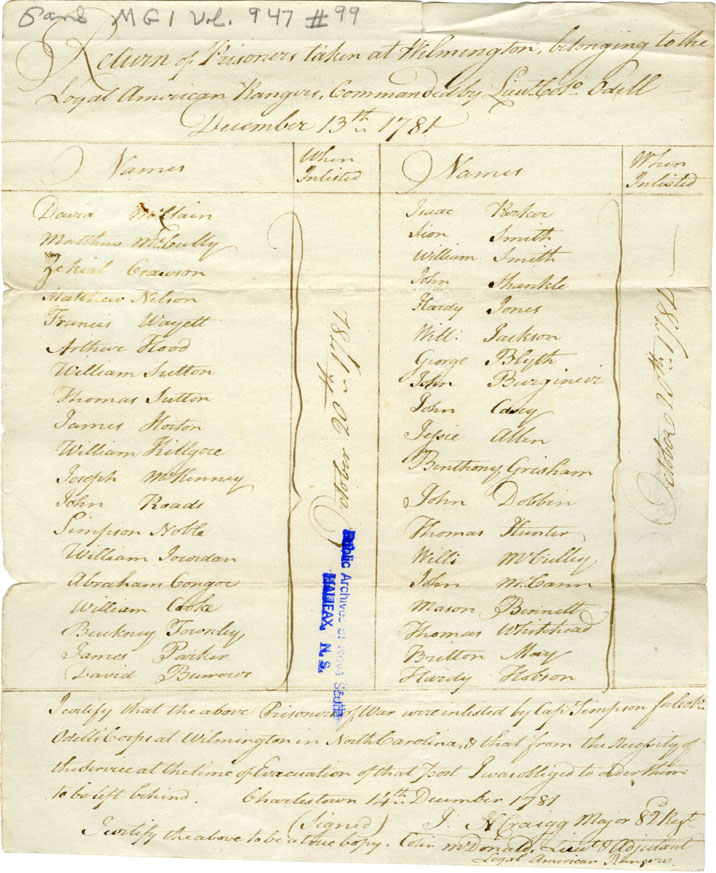 99. Return of prisoners taken at Wilmington belonging to the Loyal American Rangers.  Holograph. 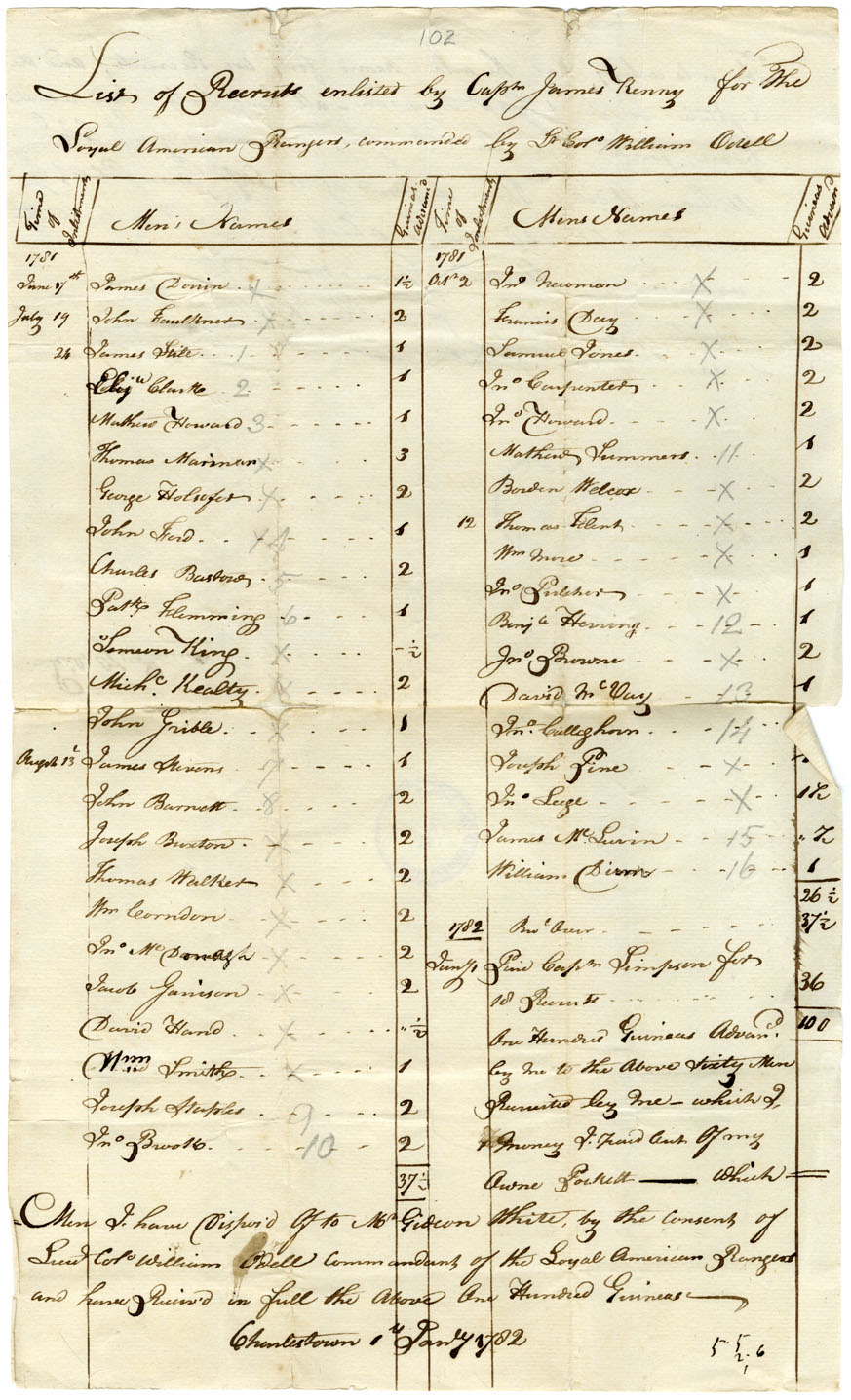 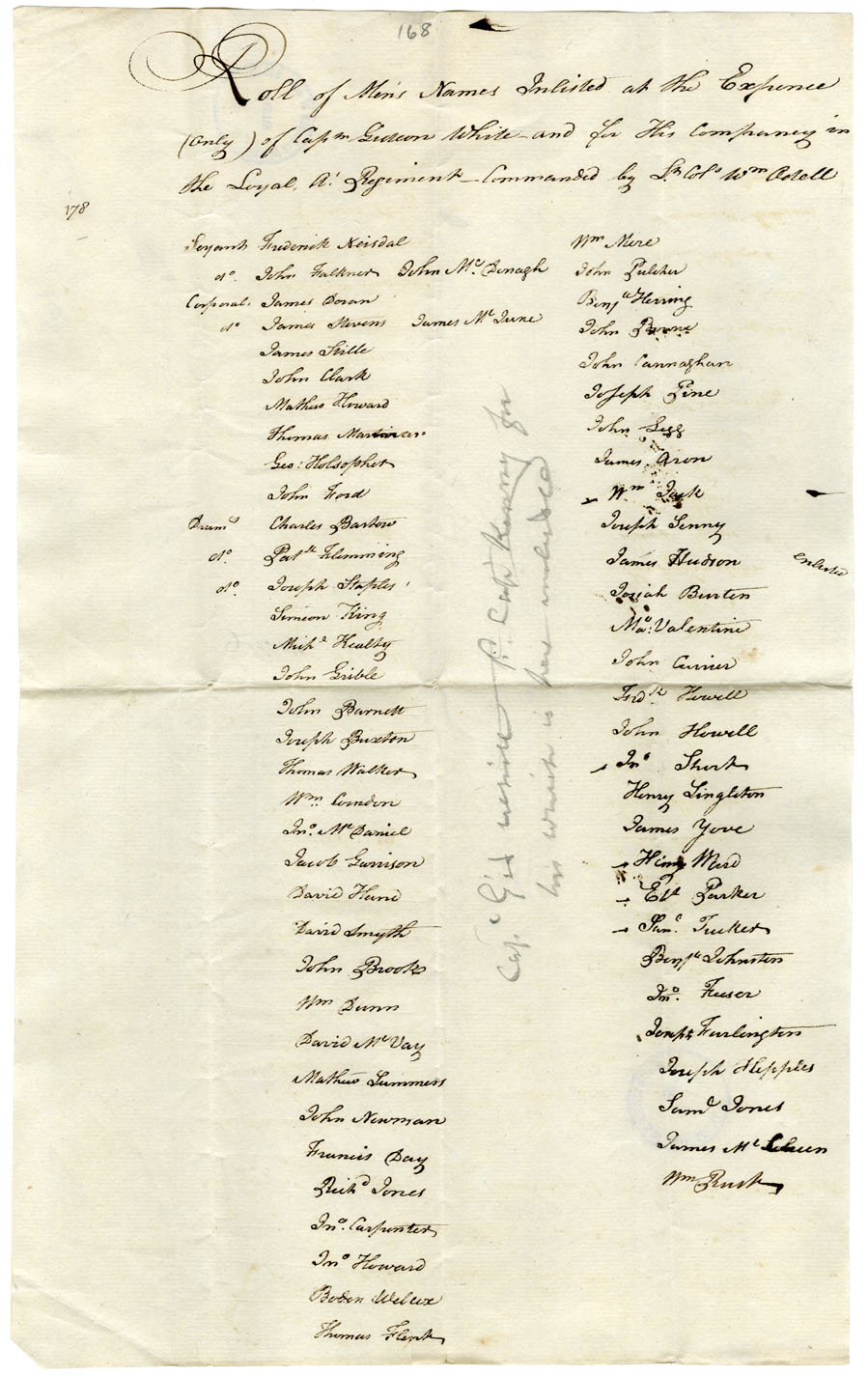 168. Roll of men's names enlisted at the expense of Capt. Gideon White. 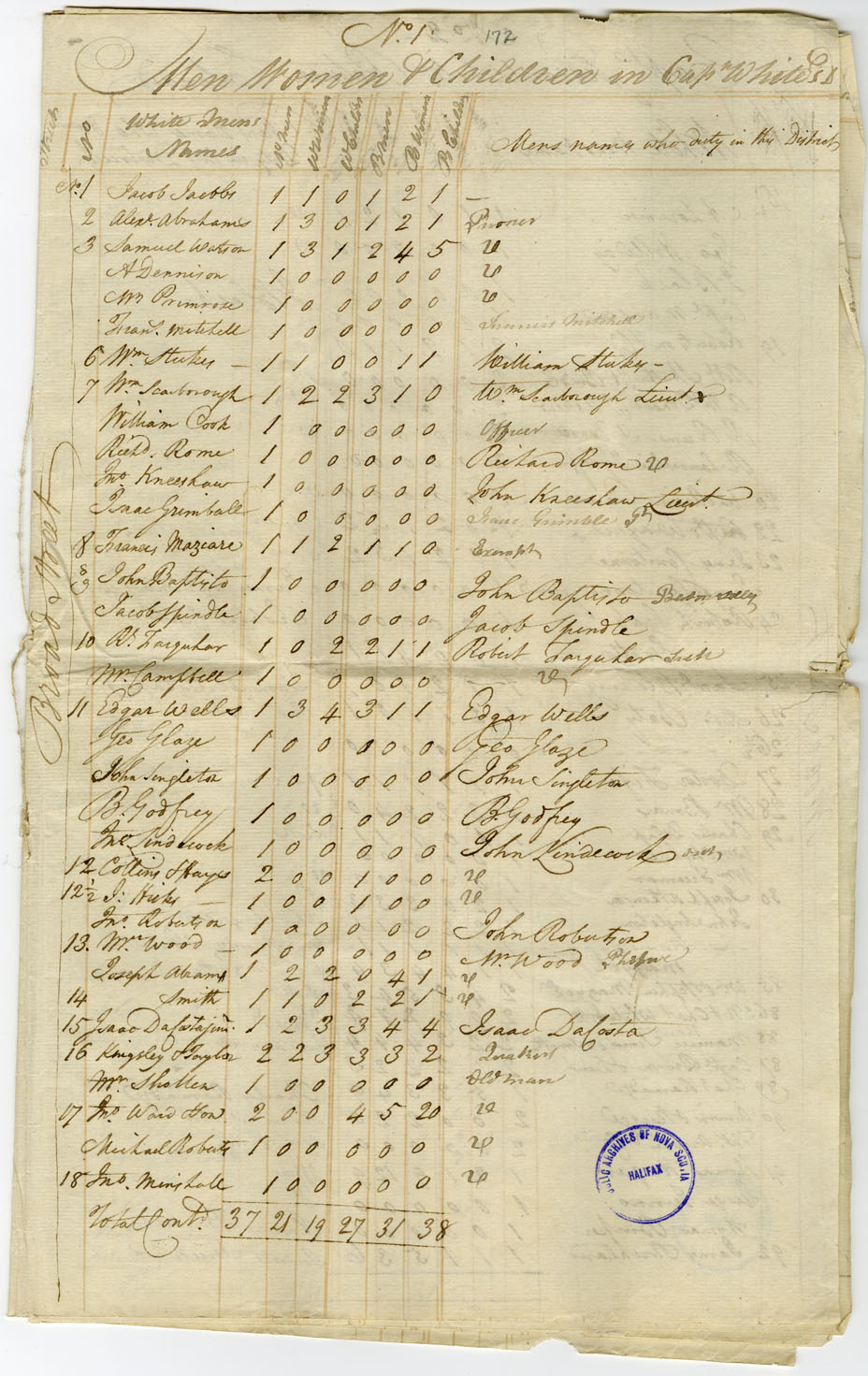 172. Return of men, women and children, black and white in the district and town of Charlestown which Capt. Gideon White commands. 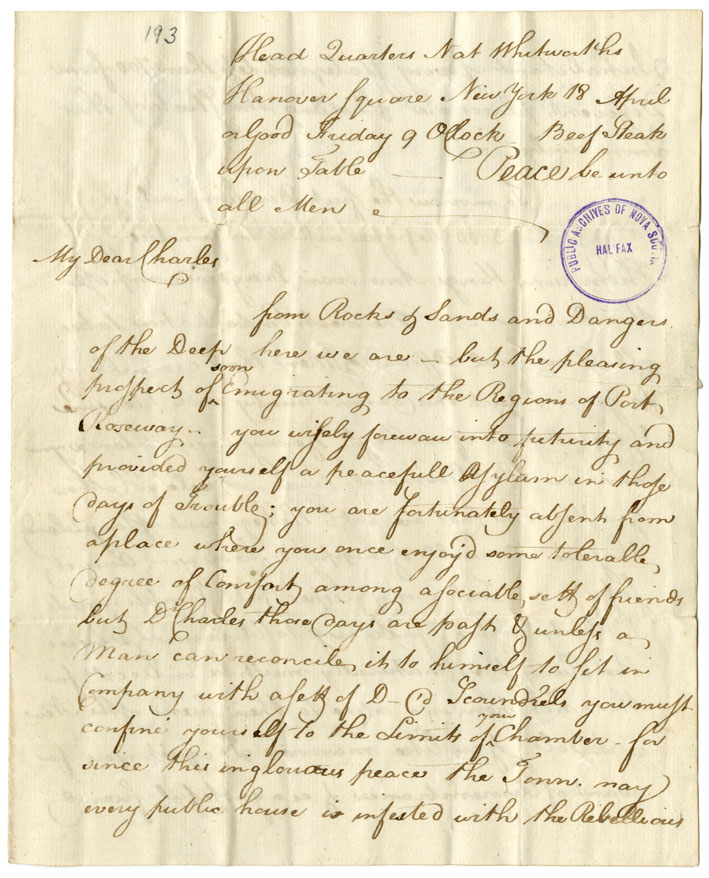 193. G. Clopper to Charles Whitworth. ''from Rocks & Sands and Dangers of the Deep here we are - but the pleasing prospect of soon Emigrating to the Regions of Port Roseway - you wisely foresaw into futurity and provided yourself a peacefull asylum in those days of Trouble; you are fortunately absent from a place where you once enjoy'd some tolerable degree of Comfort among a sociable sett of friends but Dr Charles those days are past & unless a Man can reconcile it to himself to sit in Company with a sett of D-'d Scoundrels you must confine yourself to the Limits of your Chamber-for since this inglorious peace the Town, nay every public house is infested with the Rebellious Inhabitants of every State, not less than 700 from Different places are Strolling the Streets of this Town daily.
To-morrow the first Division sail for Nova Scotia, 3000 Refugees with their families & Thompson's Kings American Dragoons compose this Division-The next Embarkation takes all Provincial Officers & Men that are willing to go-I quit this damnd Country with Pleasure...'' Personal Matters. Holograph. 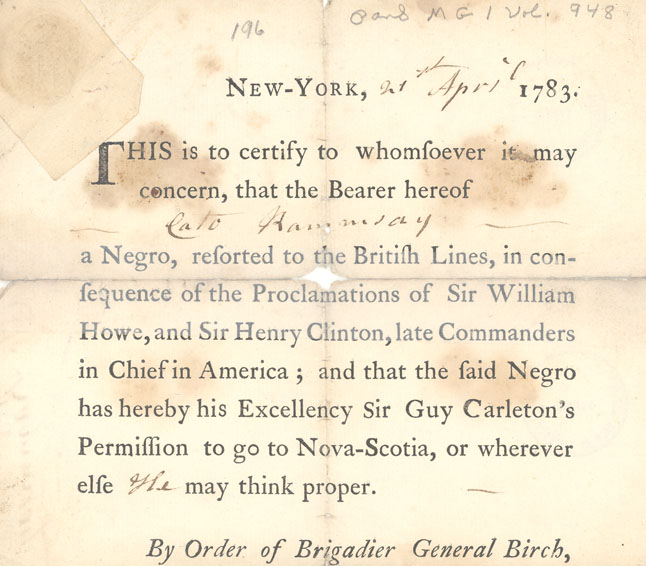 196. Permit for the negro Cato Ramsay to go to Nova Scotia ''or wherever else he may think proper''. Printed form. 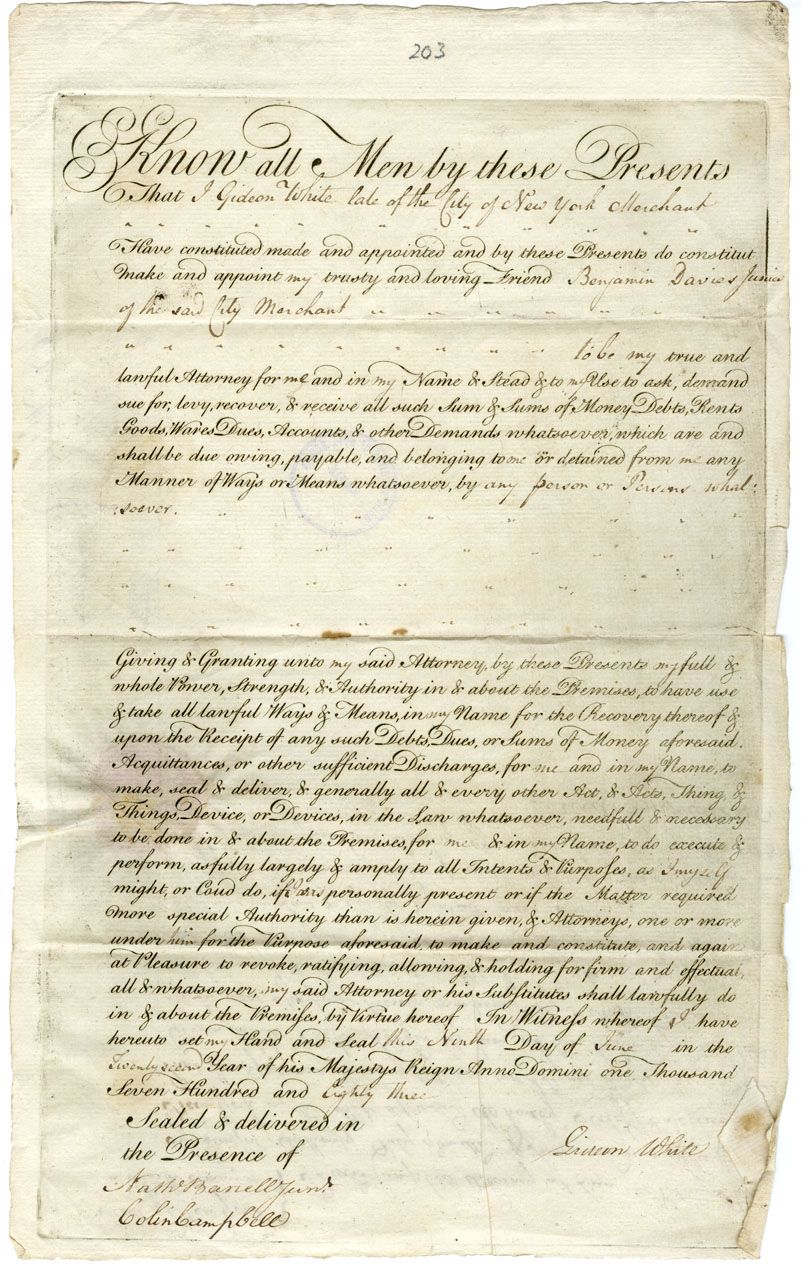 210. [Copy of] letter from Jas Courtney to Archibald Cunningham, on arriving at Shelburne (Port Roseway). ''My reason for not writing ere this was on our arrival here dark woods and dismal Rocks Cover'd the ground (which belonged to the Associated Loyalists) on my first going on shore after travelling five or six hours, returned quite discouraged, and yet had in the Course of my Ramble knocked down two brace of Partridges and one Hare, next time went further [and] still returned dissatisfied. I tho't Hunger look'd every wretch in the face that could not hunt or shoot for his subsistence [......] boasted Land of Cannan my stay here shall be very [short] but I will first look at the Fishery we went & [return]ed well satisfied. Providence in the Article has been exceeding bountifull, fish never was more plenty nor easeyer come at, than from this place. Great numbers of Vessells from different places of New England are here fishing, which by the by was infamous in the Peace Makers to allow.
We have got our town Lotts which is just large for a good House and Small Garden, and [ ]. Since the Trees are cut / good down the Ground looks [ ] and is exceeding/, far preferable to any about Halifax [and] I think equal to any I have seen in the Province, if [ ] Encouragement is given by Government it will in a [ ] time be a fine Settlement; the Harbour is one the [ ] and best in the World exceeding easey of access and [ ]ly secure when in - so that had I wrote you at first [I should] have given a poor and ver unjust account of it, for [I am no]w determined to stay and think to do exceeding well. General Patterson has been with us, and promises every [ ] in his power - The Governor likewise did set [ ] intention of visiting, but on the passage was taken [ ] obliged to return, yet sent a very genteel letter being Sorry [ ] ing it at juncture in his power to see a place which [ ] to be the first in the Province. I have enjoyed my [ ] likewise all our little family which join in [ ] and Believe me to be yours Sincerely.''
[Enclosed in Cunningham to Whitworth, 14 July 1783] 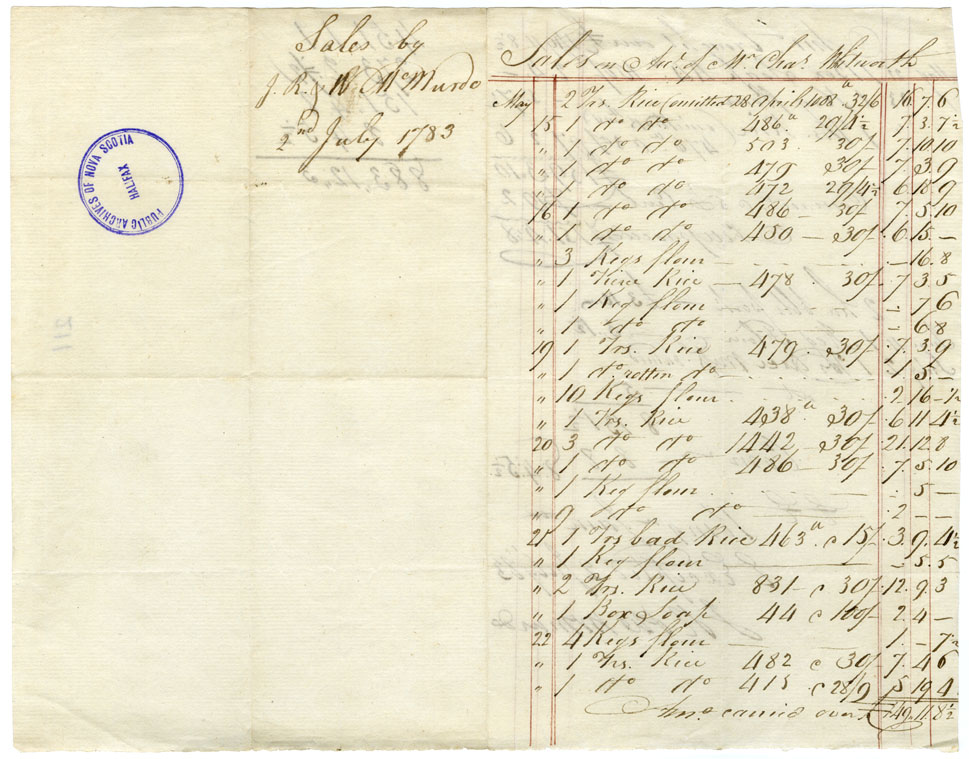 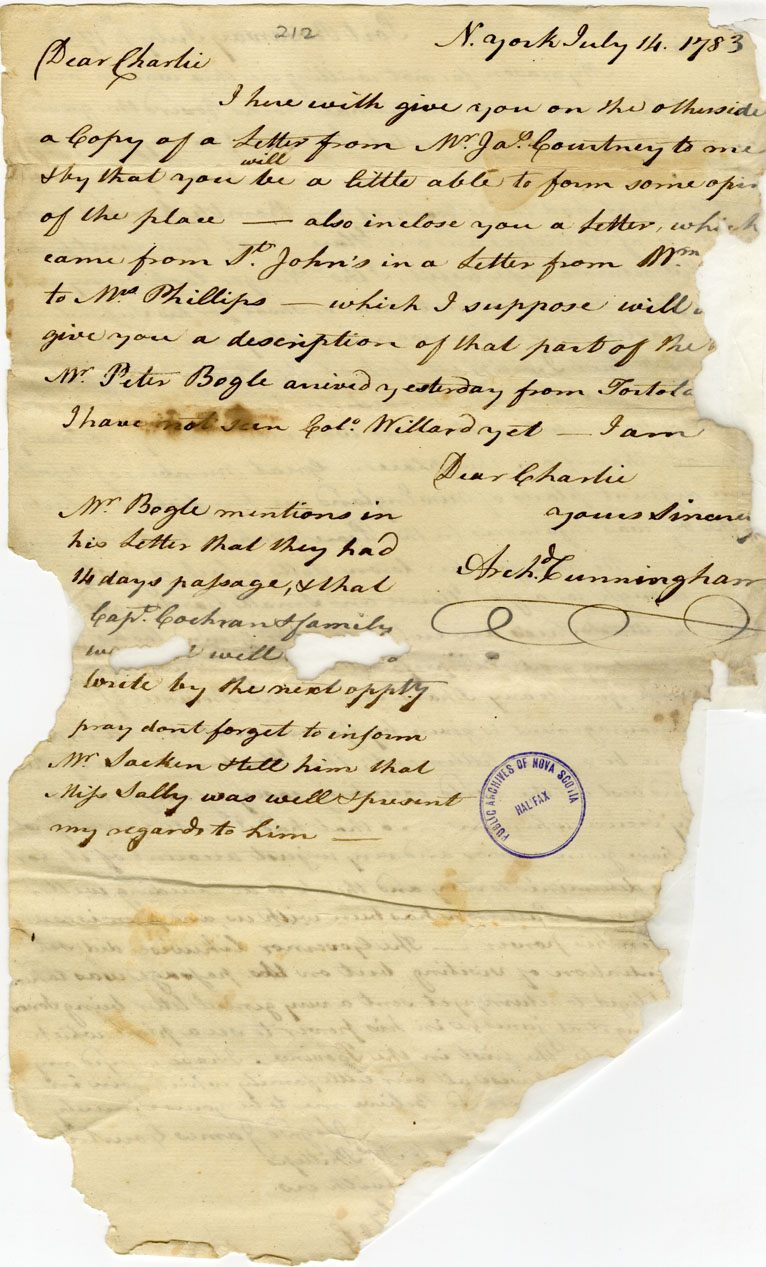 212. Archibald Cunningham to Chas. Whitworth, enclosing copy of Jas. Courtney's letter from Shelburne, which will tell him a little about the place.  Holograph
Overleaf: abovementioned letter, 1 July above. 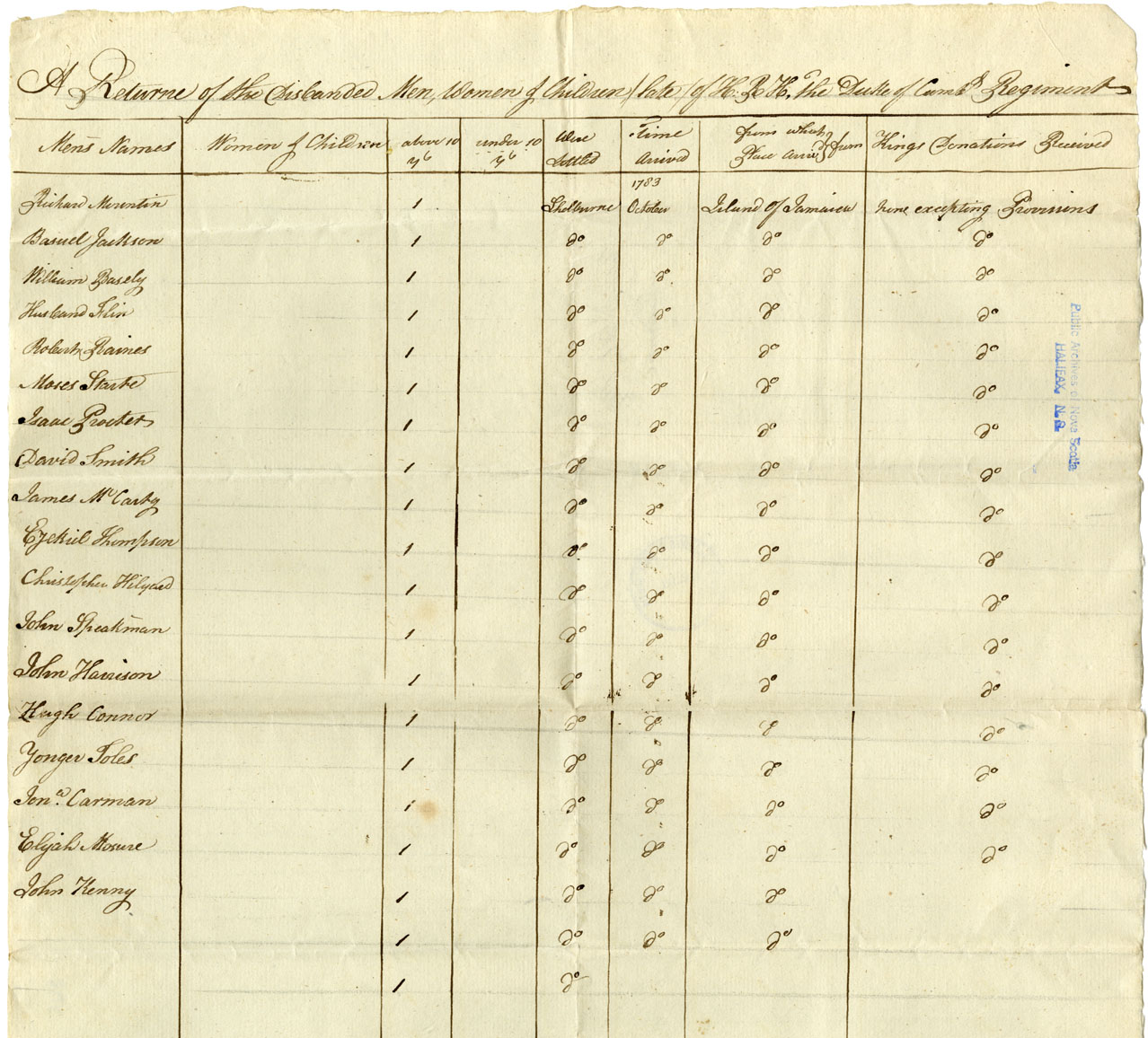 248. Part of return of disbanded men, women and children of the Duke of Cumberland's regiment. 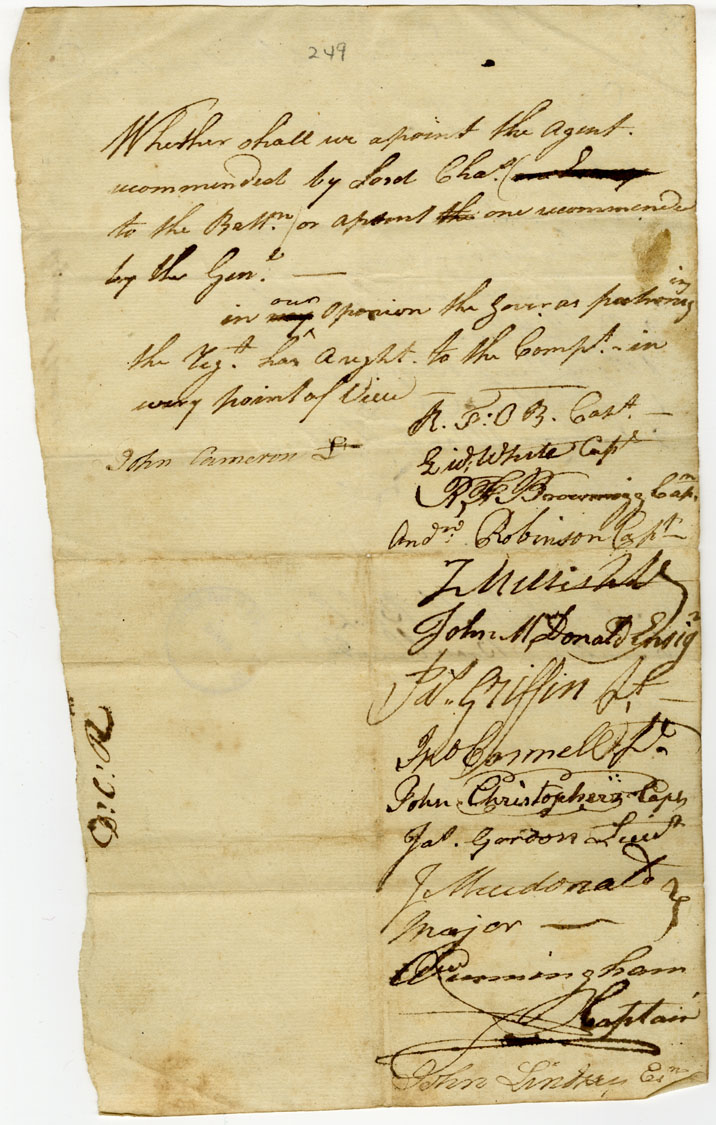 249. Opinion of 14 officers of the Duke of Cumberland's regiment that they should appoint an agent according to the Governor's rather than Lord Charles Montague's recommendation.
Overleaf: Memorandum of different articles wanted. Signed. 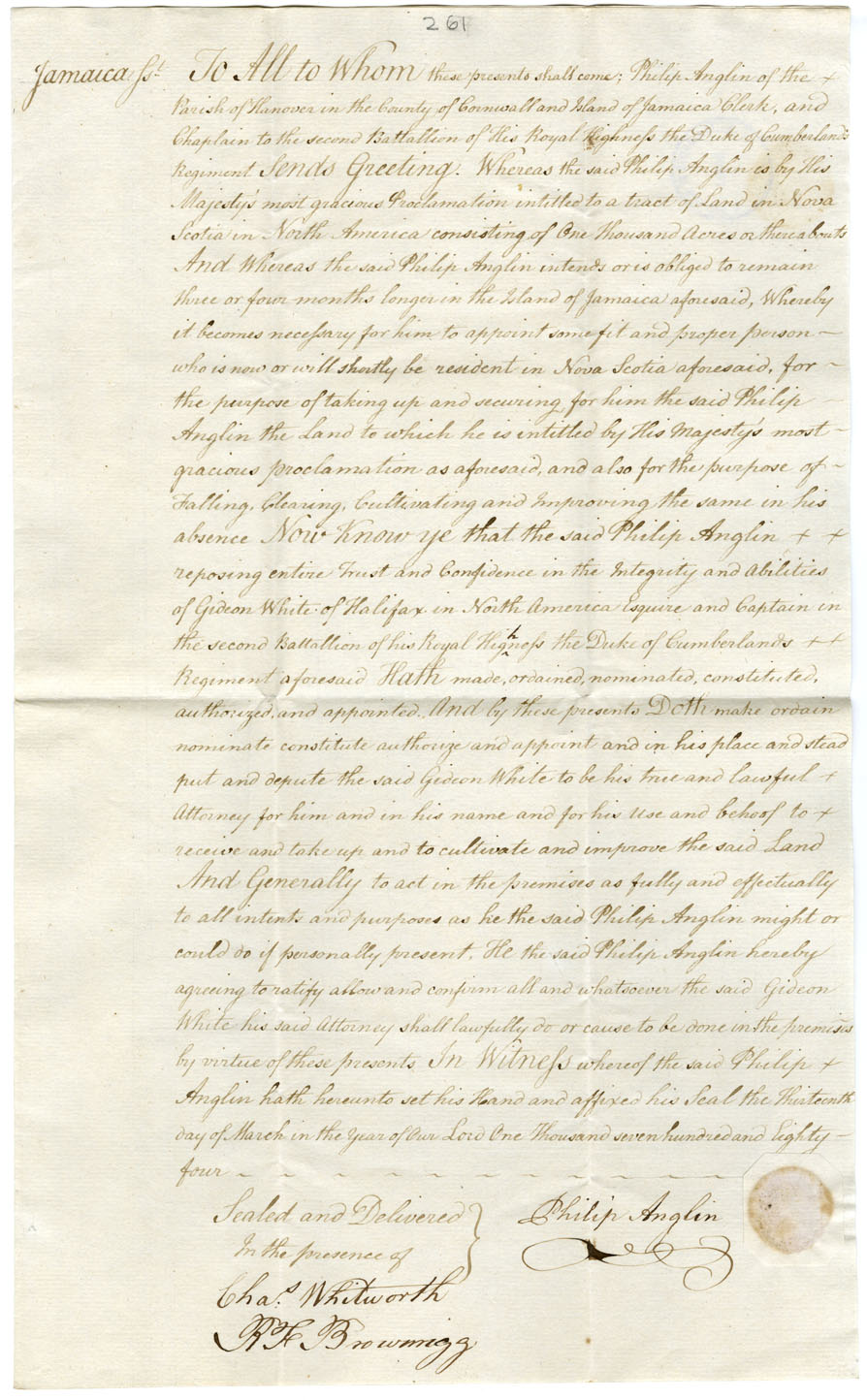