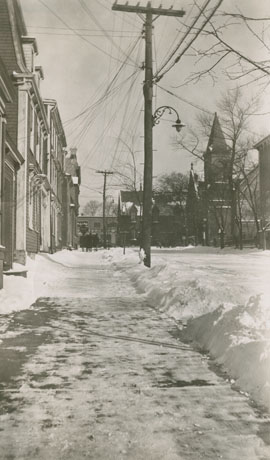 The cornerstone of First Baptist Church (corner of Spring Garden Road and Queen Street) was laid on 6 May 1886, and the first service was held on 10 April 1887 with a capacity congregation in attendance.

Tragically, this brick-walled edifice and adjoining hall were completely destroying in a morning fire which raced through the building on 21 March 1942. The church organ was considered one of the best in Halifax but also lost in the flames.

The Halifax Mail, 21 March 1942, reported that Doyle Street garage-men, army officers, and soldiers attempted to extinguish the flames with hand extinguishers but soon turned their attention to removing an organ, piano, chairs, carpets and pictures.

Fire fighters were hampered by a lack of water in fighting the blaze. The church's estimated loss was $100,000.