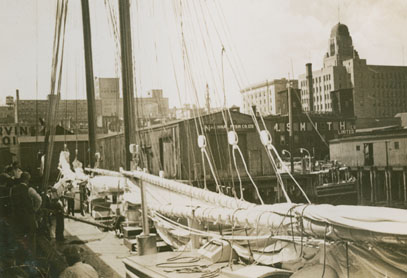 Douglas Ewart Hamilton, The Maritime Provinces, Toronto 1927, pp. 28-29, gives a snippet of the fishing industry on the Halifax waterfront, "A small army of men and boys is kept busy on the wharves of Halifax, handling the vast quantities of fish which the boats bring in, unloading vessels, weighing fish, mixing brine, mending barrels, packing casks and boxes, and doing the hundred and one jobs which handling fish in such large quantities entails."