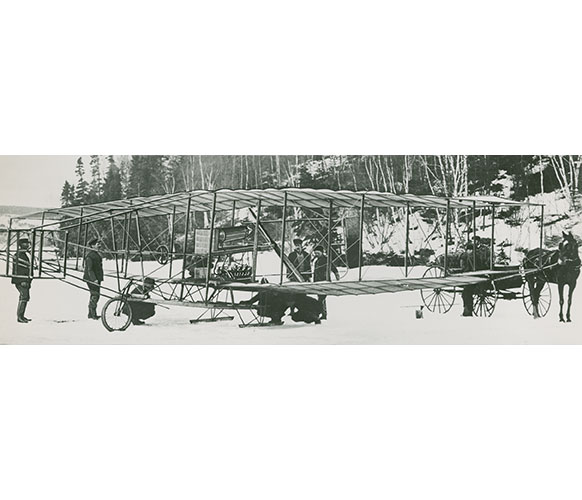 Until 1909, all flights had taken place in United States but Dr. Bell wanted to recognize Canada for the role Canadians had played in the venture. The Silver Dart was brought to Canada. On 23 February 1909 John McCurdy piloted the Silver Dart which took off from the frozen waters of Baddeck Bay. This was the first recorded flight of a heavier than air machine in the British Commonwealth. McCurdy told CBC reporter Bob Brazil, the Silver Dart was "a bi-plane very lightly built of wood and silk fabric. It had a wing scan of about forty feet and an overall length fore and aft of about 25 feet. The pilot sat well in front fully exposed to the weather. It was powered by an eight cylinder water cooled engine of approximately 40 horsepower driving a pusher type propellor." McCurdy also mentioned the Silver Dart was equipped with a three wheel tricycle type undercarriage which enable the plane to take off under its own power. In 1949, McCurdy said he remembered the circumstances as if they were yesterday which he recalled for Brazil, "It was a brilliant winter day and the ice of Baddeck Bay was completely free of snow. We wheeled the aircraft out of its shed on the shore amidst the incredulous stares and remarks of a couple of hundred spectators who had gathered to witness the event. I having taken my seat, the machine was released and after a run of about a hundred feet, took to the air. I landed on the ice about half a mile away and taxied back to the starting point, and think the thing that impressed me most was the look of absolute astonishment on the faces of the spectators." [2007-058/001/#122]