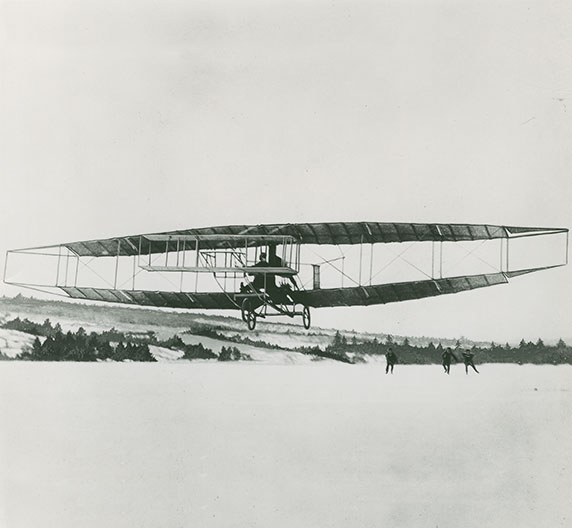 On 23 February 1909, about 100 Baddeck residents, on skates and otherwise, gathered to watch the event. McCurdy believed that very few, if any, believed the machine could fly. Dr. Bell would not permit the experiment to proceed until the local doctor arrived. Fortunately, the frozen surface of the Bras d'Or Lakes, provided many miles of runways. As McCurdy recalled, "Much to the joy and surprise of everyone present, the airplane took to the air after a short run and flew a distance of three-quarters of a mile at an altitude of about sixty feet, and then landed. The pilot then taxied the machine back to her original starting point, and it was then that Bell announced that the flight had been successful, that it might have made history and that no more flying should take place that day so that there could be no record left of anything which would mar the achievement." [J.A.D. McCurdy, "Address given at the 19th Annual Meeting of The Telephone Association of Canada on July 1st, 1948, in Maritime Telegraph & Telephone & Associate Companies' Employees, The Monthly Bulletin, July 1948, p. 129]