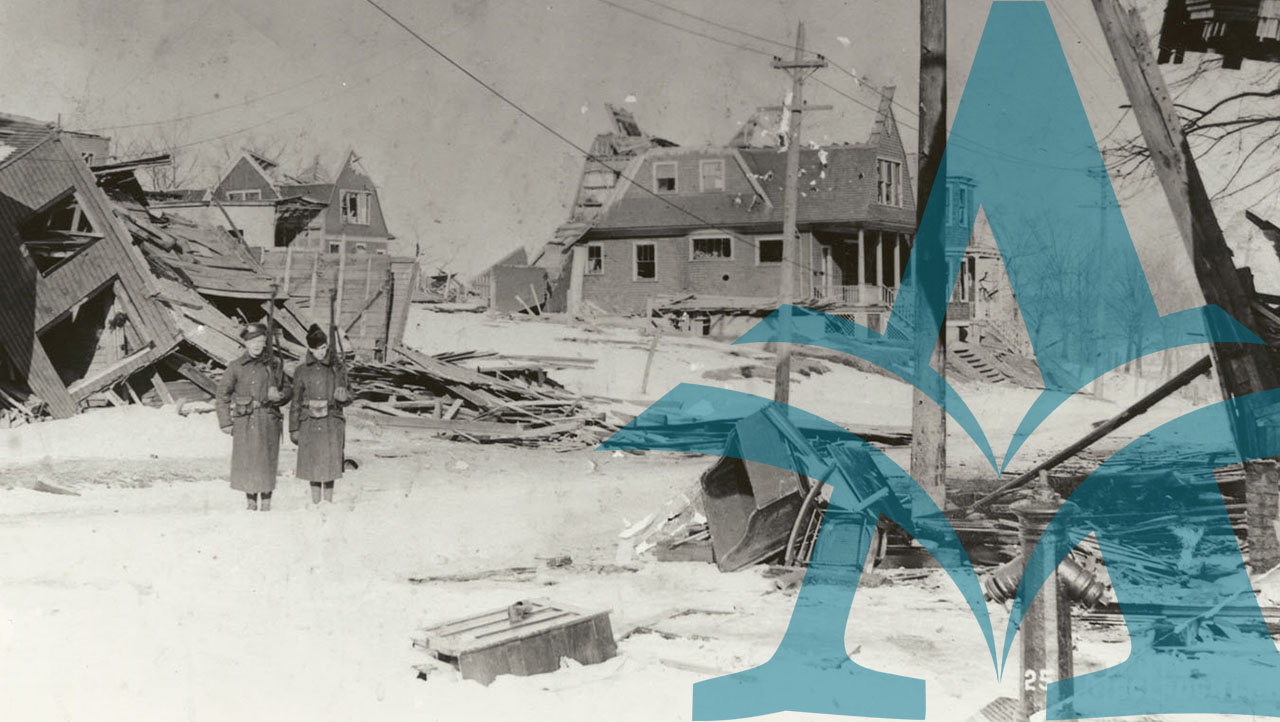 Soldiers standing guard in the midst of the devastation on Kaye Street east of Gottingen Street, Halifax

December 6, 1917 is a day indelibly etched in the hearts and minds of the citizens of Halifax and Dartmouth. On that Thursday the Norwegian vessel SS Imo, carrying Belgian relief supplies, and the French freighter SS Mont Blanc, carrying munitions, collided in Halifax Harbour, thereby creating what was then considered to be the worst man-made disaster in the world's history.

A few seconds before 9:05 a.m., the Mont Blanc, carrying 2500 tons of high explosives and with a deck-load of monochlorobenzene, blew up, shattering the 3000-ton vessel and spewing destruction over 325 acres. The explosion killed more than 1600 people instantly and injured over 9000 others, in a metropolitan area of 65,000 people. More Nova Scotians were killed in the explosion than were killed in World War I. The catastrophe resulted in over $35,000,000 damage.

Schools, churches, factories and private homes were swept away by the force of the explosion. Then hot furnaces and upset stoves ignited the wreckage and large areas were reduced to charred ruins. The principal Halifax district to suffer damage was Richmond. No maps, plans or descriptions have been identified that precisely define this area. For the purposes of this exhibit, the boundaries have been defined as Bedford Basin, Halifax Harbour, Russell Street, Robie Street and Kempt Road. The area destroyed and damaged was, however, considerably larger than the area known as Richmond, and included the rest of north-end Halifax as well as isolated damage to buildings farther south. In Dartmouth, the thinly-populated north end was severely damaged, while central portions of the town sustained isolated damage as well.

Within hours of the explosion, the Halifax Relief Committee, a volunteer organization, was organized. Its myriad duties of rescue and relief included sheltering the homeless, identification of the dead and injured, construction of temporary housing and the appraisal of demolished and damaged buildings. Under the able leadership of Robert S. Low, general manager of the reconstruction initiative, an army of carpenters, masons, plumbers, electricians and other tradesmen was mobilized to begin the awesome task of rebuilding. At first the homeless were billeted in any undamaged structure available, even in tents on the Commons. By the time the Halifax Relief Commission was appointed in January 1918, temporary housing was almost complete or well underway in Halifax on the Exhibition Grounds (Almon Street), the South Common (Bell Road) and the Garrison Grounds (Park Street South); and in Dartmouth near Victoria Park. By March 1, 1918, 832 modern, self-contained flats had been constructed to house those without permanent shelter. During the same period the Relief Committee had also processed over 3000 orders for repairs to houses.

Although the volunteer committee had done excellent service, it became evident that the work of reconstruction was so vast and overwhelming that it would have to be coordinated by a permanent commission. The Halifax Relief Commission was appointed by federal Order-in-Council on January 22, 1918, in part to oversee the expenditure of nearly $21,000,000 donated by the Canadian, British and other governments, and by the general public. The Commission was given the power to "take over and receive all unexpended moneys and goods contributed for the relief of the residents of Halifax, Dartmouth and vicinity who suffered by reason of the disaster of December 6th last and to expend and distribute the same equitably for the general purpose for which they were contributed... ."1 The Commission included T. Sherman Rogers, K.C., Halifax, Chairman; Mr. W.B. Wallace, Judge of the County Court, Halifax; and F.L. Fowke of Oshawa, Ontario. Ralph P. Bell was the secretary.

The Provincial Legislature passed a subsequent act which incorporated the Halifax Relief Commission and broadened its powers. The act granted the Commission the power to spend relief monies in any manner it deemed appropriate, stating that the Commission "may repair, rebuild or restore any building or property damaged, destroyed or lost in or by reason of the said disaster, or compensate the owner thereof, or any person having an interest therein in respect thereof to such extent as the commission may think fit."2 On occasion these powers were to place the Commission at odds with both private citizens and the municipal governments of Halifax and Dartmouth.

To assist in reconstruction planning for the devastated area, the Commission turned to famed town planner Thomas Adams, who, with his able assistant H.L. Seymour, drew up a master plan for the new Richmond district. Adams was joined by another capable professional, architect George Ross, of the firm of Ross and Macdonald of Montreal, who offered their services at a bargain rate in February 1918. Ross and Adams jointly toured the devastated area on April 10 and subsequently prepared preliminary reports.

Adams laid out a plan for the entire North End. However, it was only for the area under the Commission's jurisdiction that his plan was subsequently adopted. Without interfering unduly with existing street patterns, two new diagonal streets--Devonshire and Dartmouth Avenues--were laid out 80 feet wide, linking Gottingen and Barrington Streets. At the intersection of these new streets a small square was created, about which public buildings could be grouped; as well, property at Fort Needham was acquired to create a public park. Immediately west of Gottingen Street, 23 acres formerly known as 'Merkelsfield' were developed as a rental-housing project on a rectangular site over half-a-mile in length, but only 420 feet wide. This area is now known as the 'Hydrostone District', after the building material used in its construction.

George Ross completed his report for the Merkelsfield project first. It was his intention that the development of the 324 housing units, with sixteen shops and offices on West Young Street, should serve as a model of modern construction. His goal was to maximize the aesthetic qualities of the development and provide fire-resistant and sanitary buildings at a reasonable cost. He decided upon hydrostone for the exterior of the houses. Hydrostone consisted of a mixture of gravel, crushed stone, sand and Portland cement moulded under pressure. To provide variety, he designed six different types of four-unit buildings, as well as a variety of two-unit houses at the end of the terraces. He also altered roof designs and the arrangement of timber and stucco, in order to give buildings an individual appearance.

At first, Ross's sole responsibility was the Merkelsfield development. However, the architect's offices in the Relief Commission buildings on Sackville Street were inundated by property owners whose houses had been destroyed. They pored over blue-prints and sought consultations and designs for homes in the area west of the Hydrostone, along the Richmond slope area, and in the devastated areas of Dartmouth. The Contract Record of August 28, 1918 indicates that the firm "have in hand the design and supervision of construction of the one thousand or more houses which are to be built."3 If we deduct from this total the 340 buildings at Merkelsfield, this firm designed and constructed a further 660 projects. Nova Scotia Archives holds architectural plans for thirty or more of these undertakings. The houses were built in hydrostone, wood and shingle, wood and stucco, or some other variation thereof. When not designing for either the Relief Commission or private individuals, Ross and Macdonald also designed for the Halifax Housing Commission, which was funded by the federal housing act of 1915, which permitted municipal loans to limited-dividend housing companies.

The virtual exhibit presented here takes a thematic and roughly chronological approach, exploring devastated Halifax and Dartmouth, the immediate relief efforts, temporary housing, contemporary published views of the disaster, town planning activities, and then a detailed look at the actual reconstruction — workers, commercial suppliers, projects and results; the inclusion of a case study for the Thaddeus and Mary McTiernan family rounds out the exhibit, and focuses both disaster and regeneration through the lens of one family's survival experience. The exhibit utilizes photographs, maps and architectural plans, documents, books, newspaper articles, souvenir pamphlets and postcards to provide graphic evidence of the tragedy wrought by the explosion, and to give insight into the challenges and accomplishments of architectural design and urban planning during this era.

The spirit of this exhibit was captured in an illustrated poster printed in 1919, entitled "A new and thoroughly modern city under way in the north of Halifax." The poster described the hydrostone construction as beautiful, neat, sunny, clean and substantial, and in glowing terms it encouraged people to

Stand on a vantage point and view the north end of Halifax now. Men say the day of miracles is passed; but there is a vision of regeneration here that fringes the miraculous. As though over night, the North End has shaken off its incubus of holocaust. Ruin and desolation have given place to the new order. A new city has risen out of the ashes of the old. We rub our eyes and look again — but the vision does not fade. The new city remains — and grows, building by building, street by street, amid the tumultuous music of a thousand hammers, the wholesome discord of a thousand saws.

Through the magic of the Internet in the 21st century, Nova Scotia Archives invites visitors from everywhere to once again "[s]tand on a vantage point and view...a vision of regeneration" — an interpretation of the explosion and reconstruction from an archival viewpoint.