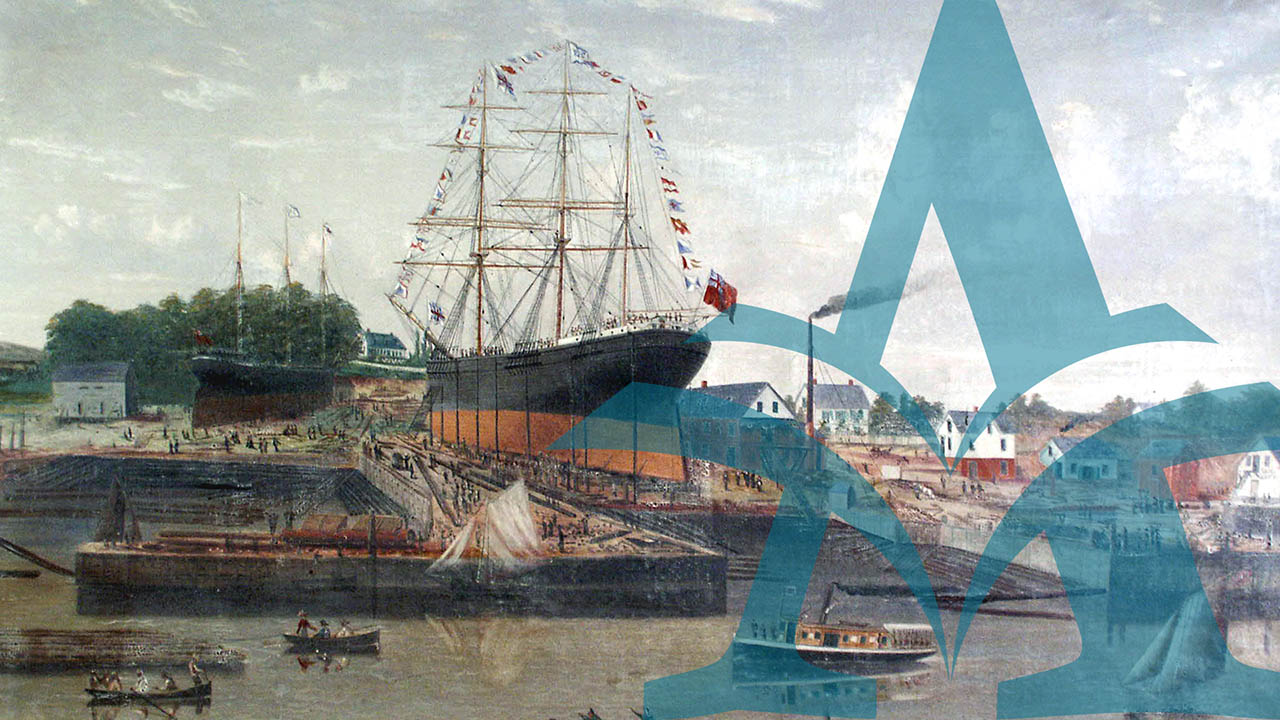 Launch of the Forest from the Churchill Shipyard, Hantsport, NS

Barquentine Maid of England with mast broken and covered with ice, Halifax, NS

Brigs and barques, barquentines, brigantines, full-rigged vessels — the largest of the legendary 'Tall Ships' built and sailed in Nova Scotia and around the world. Today they linger ghost-like in a few replicas, in distant memories and, fortunately for historians and those who love the sea, in the enduring images created by the photographer's eye and the artist's hand.

They built 'em in Annapolis, Windsor, River John
Jest as able packets as you ever shipped upon/
Yarmouth ships, Maitland ships, hookers* from Maccan
The kind 'o craft that took the eye of any sailorman/
Them fine old wind bags — them Nova Scotiamen.

This exhibit features historical photographs, marine art and representative textual records, all selected from the Archives' extensive primary-source holdings for maritime history. Among the many visual images chosen, Wallace R. MacAskill's informal photographs of 'Tall Ships' are perhaps the most outstanding.

MacAskill captured these images during the 1920s, 30s and 40s, when the last of the working brigs and barques could still be seen along the Nova Scotia coast. Aged and worn, diminished in size and significance by the age of steel and steam which had overtaken them, these vessels laboured on-proud, defiant and a sight to be seen-until the very end.

Enter the names Cap Pilar or Maid of England in the Search Box to share MacAskill's fascination with 'Tall Ships' under full sail on the open ocean. Enter the name Success and experience a close-up virtual tour that captures every angle and silhouette of an ancient convict-ship from Melbourne, Australia, as she called in to Halifax in 1928.

For a change of pace, enter the name Herbert Fuller and view two images taken by an anonymous photographer in July 1896, as the barquentine from Harrington, Maine, swung quietly at anchor in Halifax Harbour. Then read the sensational coverage printed in Halifax newspapers, retelling 'A Carnival of Murder on the High Seas.'

The story of the Herbert Fuller is a grim reminder that life at sea was neither romantic nor straightforward. We are so far removed today from the world of wind and sail that it is difficult to imagine the back-breaking work, the unpredictable weather, the solitude and monotony, the lack of space and basic comforts, and the unceasing stress of locating cargoes, managing men and caring for vessels that were indeed 'holes in the water' into which one poured money. It was a lifestyle choice which consumed those who chose it as their career.

Click on the 'Life at Sea' button to the left and enter the working world of these saltwater traders, revealed through textual records selected from the Spicer Family collection — one of the most significant sources of seafaring documentation available for understanding Nova Scotia's relationship with the sea in the late nineteenth and early twentieth centuries.