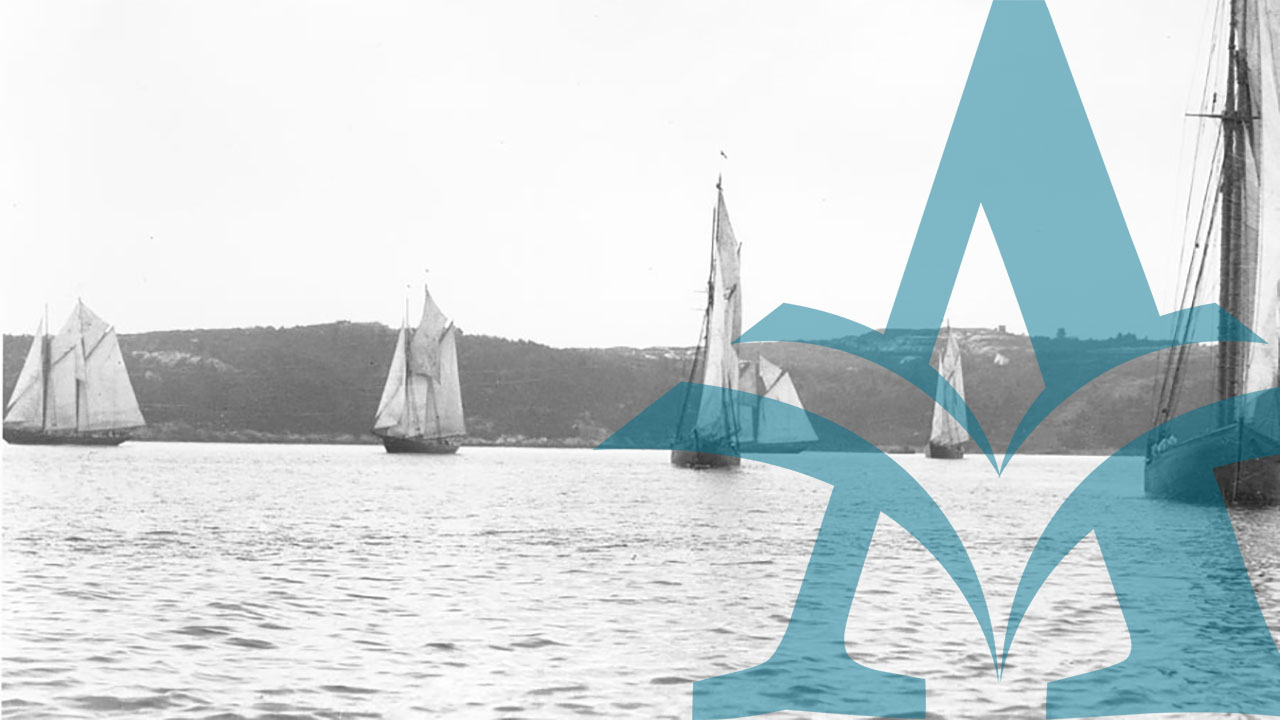 Of all the wooden vessels that have sailed in Nova Scotia waters, perhaps the best-known and best-loved is the schooner. Regardless of size or various sail configurations and rigs, this particular vessel and its graceful silhouette are instantly recognizable, imbedded in the popular imagination as quintessential symbols of maritime life and the salt-water trade.

Today the schooner lingers on as a wisp of the past, lovingly preserved in the few working models which survive in North America and elsewhere; or carefully replicated in expensive limited numbers, mostly for the yachting trade.

We forget now that the schooner's reputation was built on serviceability — relatively small, speedy, agile and seaworthy, it was the workhorse of the sea. In the days before modern road networks and transportation systems, regional trade and commerce relied almost entirely on marine routes — and small vessels. Nowhere is this more obvious than in Nova Scotia, where schooners were the backbone of the coastal trade — every seaside community had at least one or two carrying produce, fish and passengers to larger towns, bringing goods back, and in general providing the equivalent of modern-day trucking services to isolated settlements along the shoreline.

Schooners were also the mainstay of both the inshore and Grand Banks fisheries. On the latter fishing grounds, fierce international rivalries grew up around the speed, agility and reputation of individual schooners, culminating in the International Fisherman's Races of the early twentieth century (for this story, see Bluenose: A Canadian Icon).

From the earliest days of settlement, Nova Scotia schooners also traded along the Atlantic seaboard and down into the Caribbean, carrying salt fish and bringing back molasses, rum and other southern products. In the beginning years of their decline in the twentieth century, schooners enjoyed a last burst of notoriety as rum-runners, mostly in American waters, during the Prohibition period. In the end, they were overtaken everywhere by modern coastal freighters; many Nova Scotia schooners were sold to Caribbean interests and, like the Bluenose, ended their days carrying bananas and other local goods through southern waters.

This virtual exhibit is a window to the past, presenting over 375 images of Nova Scotian schooners. From the earliest known photographs in the 1880s, to snapshots of remnant schooners still afloat in the 1950s, the exhibit introduces both the vessels and the world in which they worked. Wallace R. MacAskill's photographs are well represented here, because he understood that these vessels were disappearing and was determined to preserve them through the photographer's eye.

Because the schooners' working world was not romantic, this exhibit also includes textual records portraying their everyday activities and upkeep. Enter the words 'marine survey' in the Search Box, and read through sample documents created when these vessels were inspected routinely or after accidents, listing the repairs or maintenance, invariably expensive, which were constantly required to keep them seaworthy. Enter the words 'fish trip sheet' and bring up records from the 1930s, detailing the activities of the Grand Bank fishing schooners Mahaska and Margaret K. Smith, operating out of Lunenburg. These documents provide details and costs for outfitting and crewing the vessels, balanced against the volume and value of their catches.

Lastly, enter the name Margaret K. Smith and visit the world of a typical Grand Banks fishing schooner, told through photographs and documents. The Margaret K. raced with the greatest in the early 1920s, while at the same time going to sea to earn a living. Race shots and crew photographs bring an elegant vessel back to life, while the records created around her everyday existence — the 'Schooner Journal' maintained by W.C. Smith & Co. of Lunenburg — recount her activities during the 1920s and 30s.

Journals like this were routinely kept by owners, often from the time a vessel was built or purchased, until it was sold or lost. This one includes racing expenses from 1922, details of a rum-running trip in 1925, minutes of meetings of the vessel's shareholders, accounts with local merchants, the revenue brought in from fishing trips to the Grand Banks, and the final sale of the schooner in 1932.