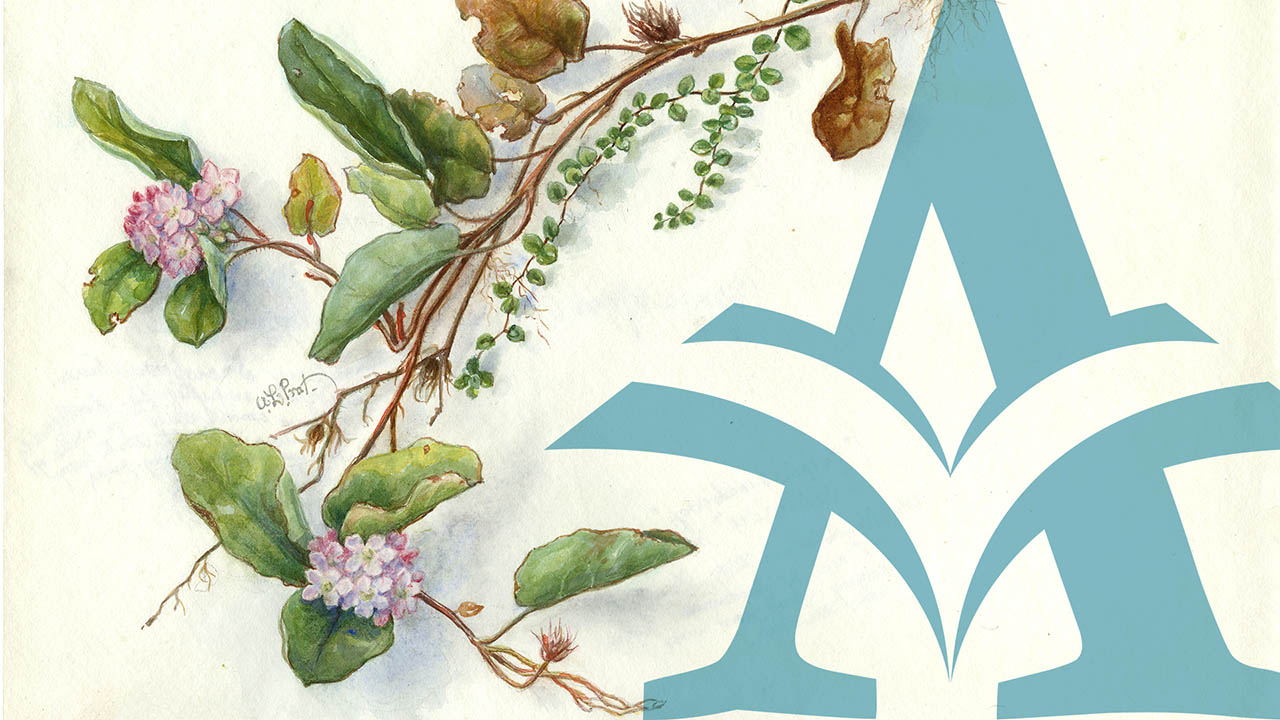 The four Prat sisters, with their mother, Elizabeth, and Charlotte's husband, George Wilcox, in front of the Wilcox's home, 'Ferry Hill,' Windsor

Entries from Annie L. Prat's autograph book, illustrated with her watercolours and sketches

Annie, Minnie and May Prat, adventurous sisters from Wolfville, Nova Scotia, embarked on unusual artistic careers in the United States in the late 1890s. In 1896, Annie, 35, enrolled at the School of the Art Institute of Chicago. In 1897, Minnie, 29, moved to New York City to learn bookbinding with Evelyn Nordhoff, who had herself apprenticed in England with noted Arts and Crafts bookbinder, T.J. Cobden-Sanderson. May Rosina, 26, joined Minnie shortly afterward to study decorative leatherwork and bookbinding with Nordhoff.

Five years later, Minnie found the courage to go to New York to apprentice with Nordhoff, in a field in which women were still pioneers. Bliss Carman, then living in New York, had arranged for the apprenticeship. Evelyn Nordhoff died unexpectedly in November 1898, at the age of 33, after a short illness. Minnie, May Rosina, and other former students kept her bindery going after her death. By 1900, Minnie and May had opened the Primrose Bindery at 37 West 22nd Street.

In 1896-97, Annie studied at the School of Art Institute of Chicago and privately with miniature artist, Cecile Payen. Afterward, she spent much time in New York State, painting and teaching art, assisting her sisters at the bindery, and visiting her closest friend, Dorothy Cornell, at Ithaca.

In 1900, Minnie and May's work was featured in an article in Harper's Bazaar. Minnie won a silver medal for her bookbinding at the 1900 Paris Exposition and a bronze medal at the 1901 Pan-American Exposition at Buffalo, New York. However, she did not live to receive her bronze medal. She died of typhoid fever at Wolfville on September 4, 1901, at the age of 33.

After Minnie's death, May Rosina, herself recovering from the effects of typhoid, found it difficult to carry on the business without her. Annie supported May Rosina by working with her at the Primrose Bindery. However, in the spring of 1904, May Rosina closed the bindery and returned to Wolfville to be married. Annie continued her career as a semi-professional artist in Nova Scotia.

This virtual exhibit focuses on the most remarkable period of the sisters' lives, from 1889 to 1901. It features Annie's watercolours, Minnie's bookbinding, and May Rosina's leatherwork, as well as letters from Bliss Carman to Annie and Minnie, several never before published. Through an interesting mix of correspondence, photographs, and memorabilia, it illuminates the sisters' creative spirits, warm personal and family relationships, and passion for life.

Several archives in the province have generously contributed digitized material to 'The Prat Sisters: Free Spirits of the 1890s.' The Esther Clark Wright Archives, Acadia University; Dalhousie University Archives and Special Collections; and the University of King's College Archives have provided items which have greatly enhanced the content, look and feel of the exhibition. Their cooperation is much appreciated.