Letter from Sigogne to John Cope Sherbrooke regarding Muis-Belcher Treaty, Maillard, the Mi'kmaq "Peace-Dance and ceremony of burying of war weapons"

I just now have received the bundle of the ambigus [a French card game, so perhaps the 'bundle of ambigus' is a deck of cards?], by which [I] have been much pleased, for in this retired place I live almost secluded from the rest of the world and absolutely from Society, and if it is not to be too troublesome, I take the liberty in that respect to beg the continuation of your Excellency's favour.

The kind and obliging reception by which your Excellency has been pleased to honour my Memorial & Petition in behalf of the Indians excites my most earnest thanks, and sincere zeal in behalf of these unfortunate beings. I shall be sparing, and I will not abuse of your Excellency's generosity. Under your auspices I have a [?firm OR finer] hope that something shall be done from government in regard to the purposes exposed in the Memorial. It is to be wished that the Legislature would take the Indians into some consideration and forbid the selling them strong liquours as it is done in Canada, I am told. That would prove the first step to render them useful members of Society. Indeed their degenerate condition renders any of them unfit to be chief, however some trial should be made to bring them to a better order. I have heard the best caracter [character] of that old chief Franc. Miuce both for Morals and Religion, from every body that knew him, but is descendants do not follow his steps. His family, however poor, is respected amongst the Indians.

I take the liberty to inclose a Bill of the [Expenditure - underlined] I have made for the Indians from November last, which does not amount to much; for I could not do more, alone. I leave it to the disposal of your Excellency. But if it were 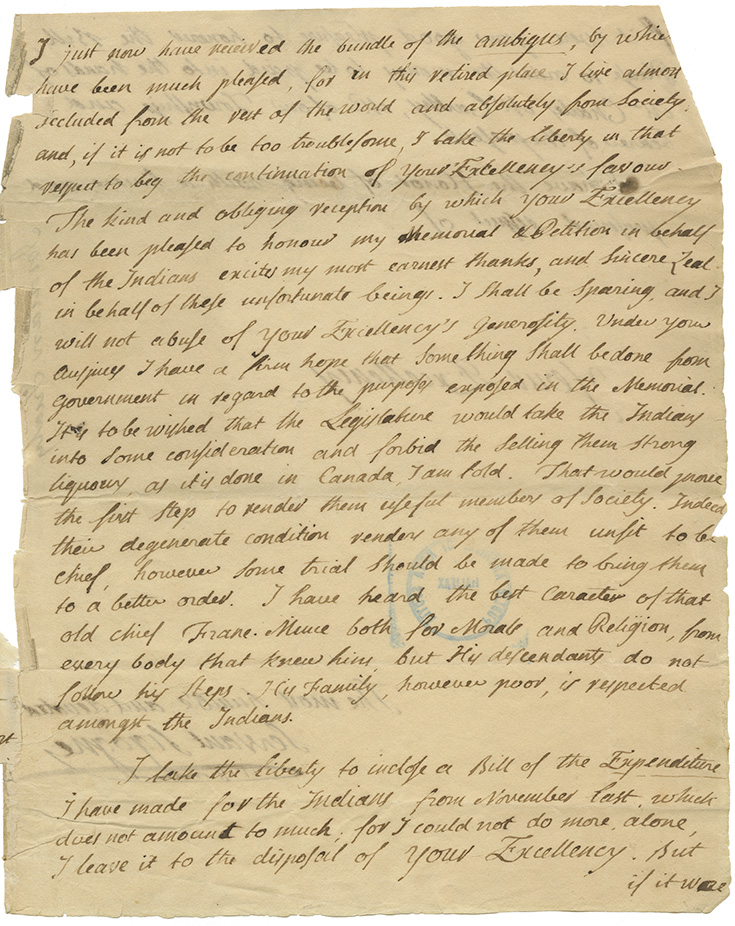