Documentation relating to the Mi'kmaq in Nova Scotia can be found broadly dispersed throughout the Nova Scotia Archives holdings, in all formats — textual records, photographs, maps, documentary art, sound recordings, moving images, print material and artifacts. The prevalence of these materials emphasizes the powerful role and influence of the Mi'kmaq people, over time, on every aspect of life in Nova Scotia. 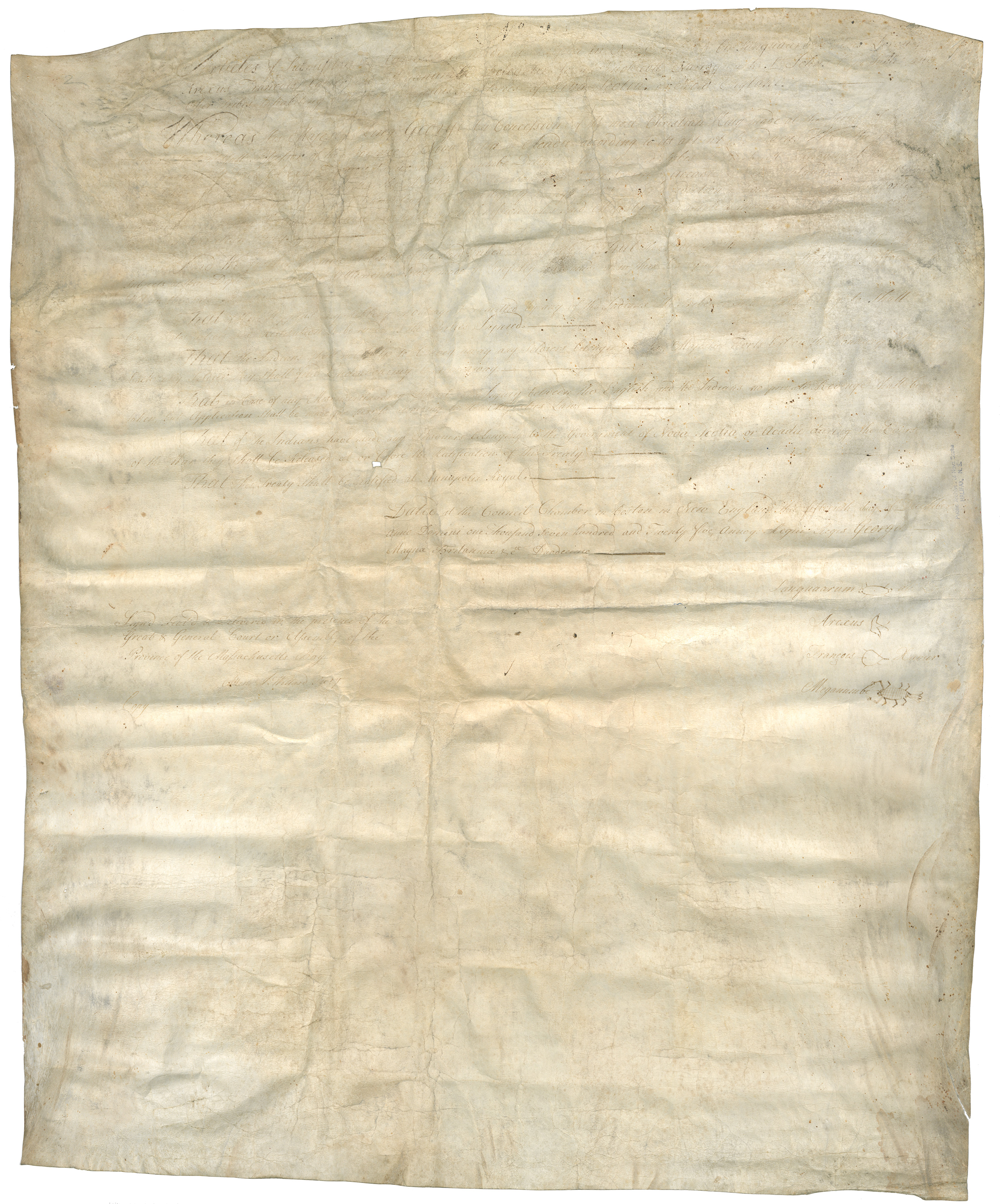 This collection consists of original copies, or transcripts, of a number of Treaties which were entered into by the Government of Nova Scotia and the Mi'kmaq between from 1725 to 1779. Some are large format vellum documents while others are true copies entered into other government records books at the time of signing. Modern transcripts are available for many of these documents. 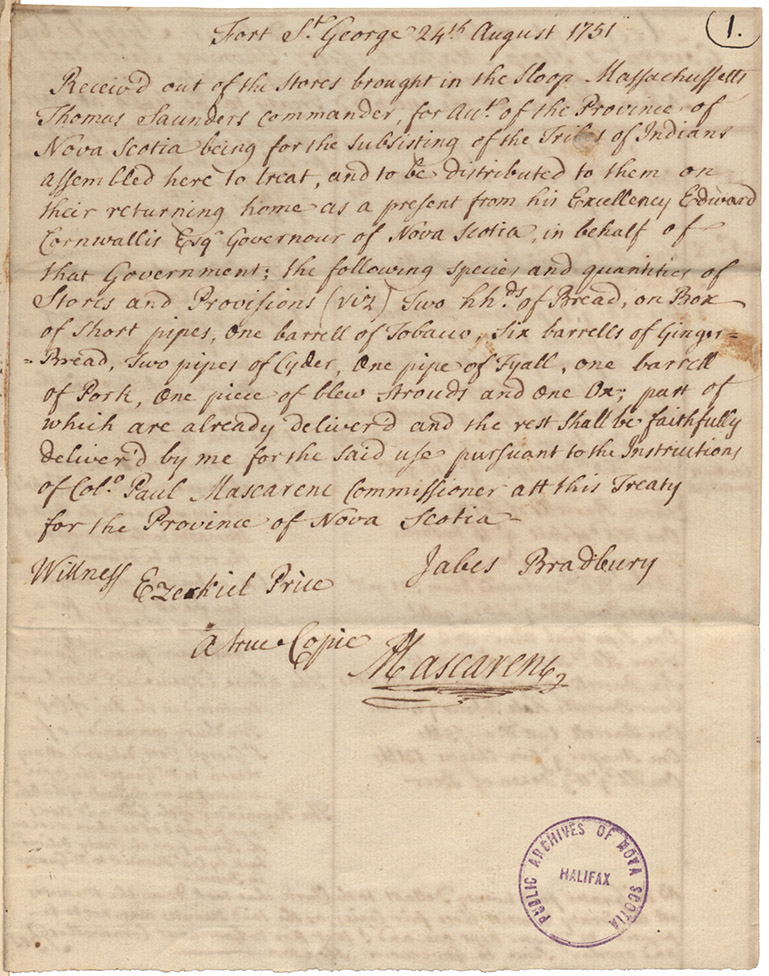 The Mi'kmaq and Government Relations series forms part of the Commissioner of Public Records collection and consists of records relating to the administration of Mi'kmaw affairs in Nova Scotia. Includes Joseph Howe's letter book as Commissioner for Indian Affairs, 1841-1843. 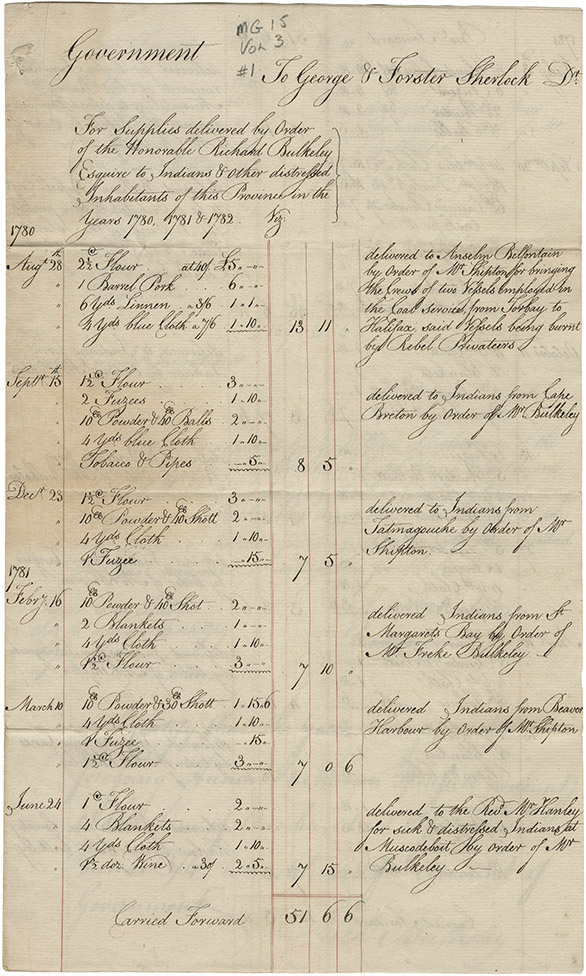 Records of the Commissioners of Indian Affairs

The records of the Commissioners of Indian Affairs consist primarily of correspondence and documentation accumulated by the various Commissioners appointed by the government, chiefly to provide relief and assistance to the Mi'kmaq; predominant dates are 1780 to 1846.

The surviving records identified so far are dispersed among the Mi'kmaq and Government Relations series within the Commissioner of Public Records collection, the George Henry Monk papers and material from Peleg Wiswall. 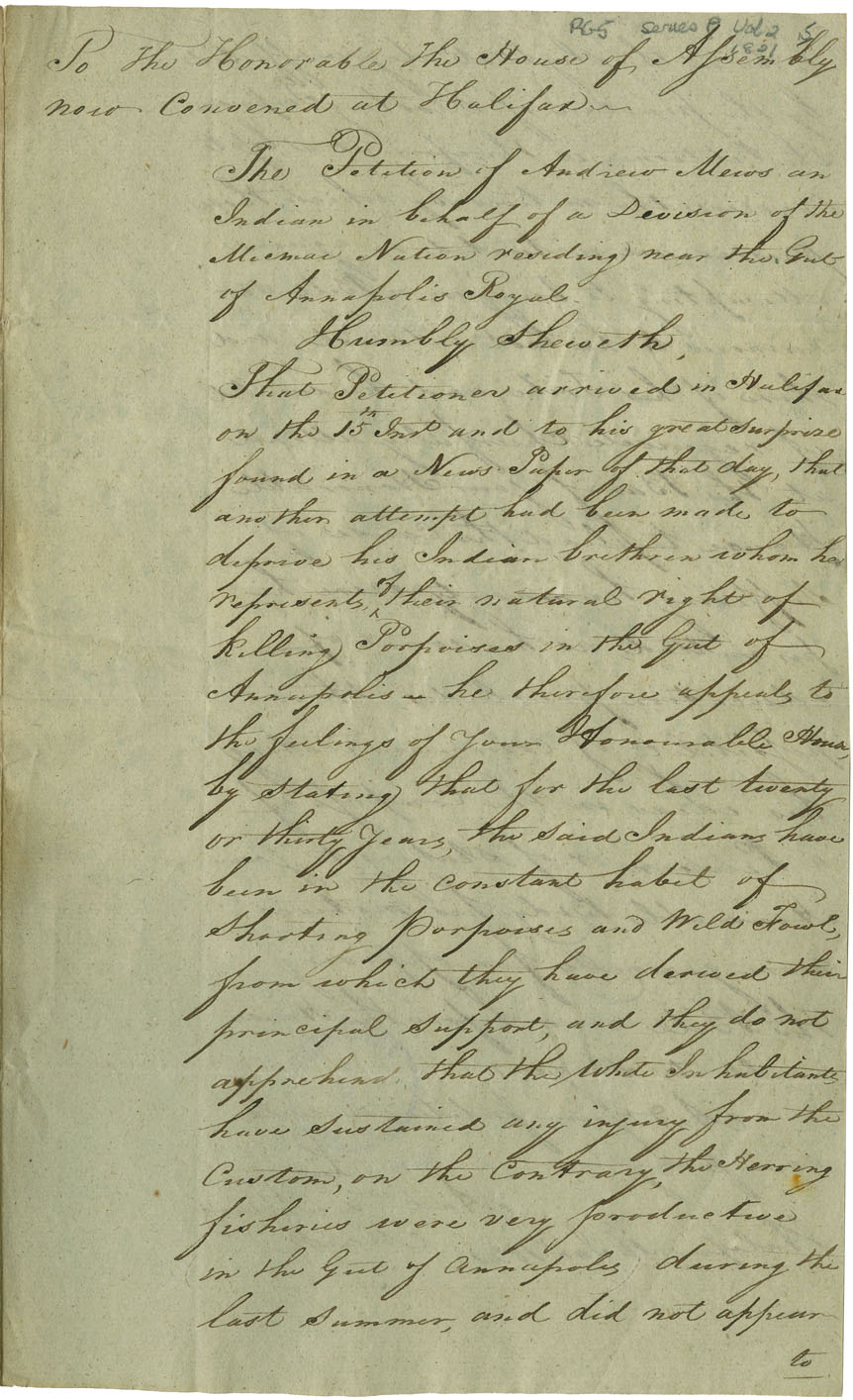 The Assembly petitions consists of petitions tabled in the House of Assembly from 1816 to 1926 from people seeking legislative action or a grant of money. The Mi'kmaq frequently petitioned for action on such issues as relief, agriculture and fishing, education and roads. The Petitions series consists of petitions addressed to the governor or lieutenant governor from 1780 to 1907. Included are various petitions from the Mi'kmaq requesting action on such issues as relief and encroachment on their lands. 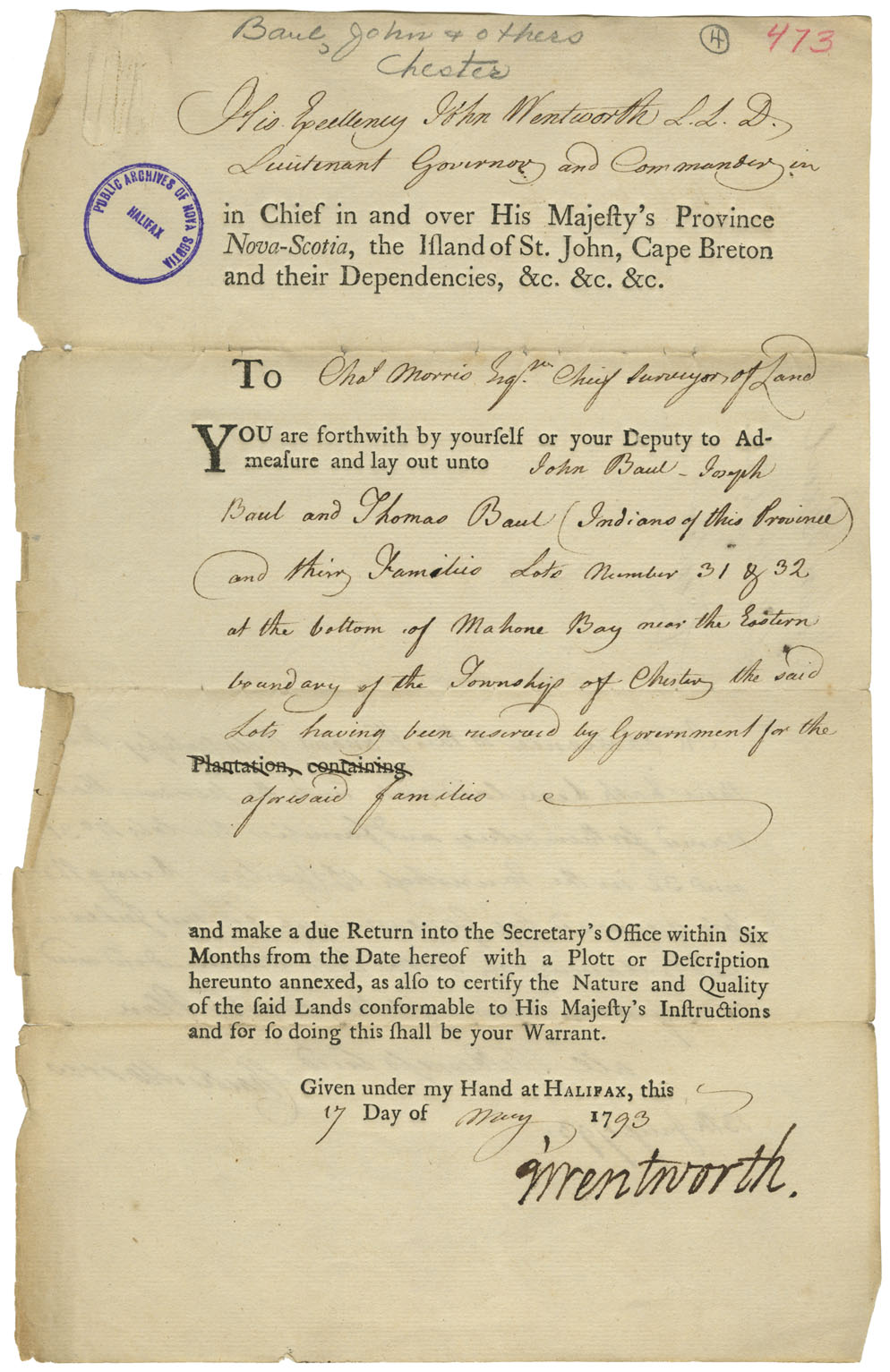 The land grant registration books accumulated from 1719 to 1851 document the granting and licencing of Crown lands to early settlers in Nova Scotia. Included among these records are various descriptions of land licenced to individual Mi'kmaq persons and families, warrants authorizing such occupation, and original petitions by Mi'kmaq illustrating the conflict of inherent Mi'kmaq aboriginal title with the British system of freehold tenure. 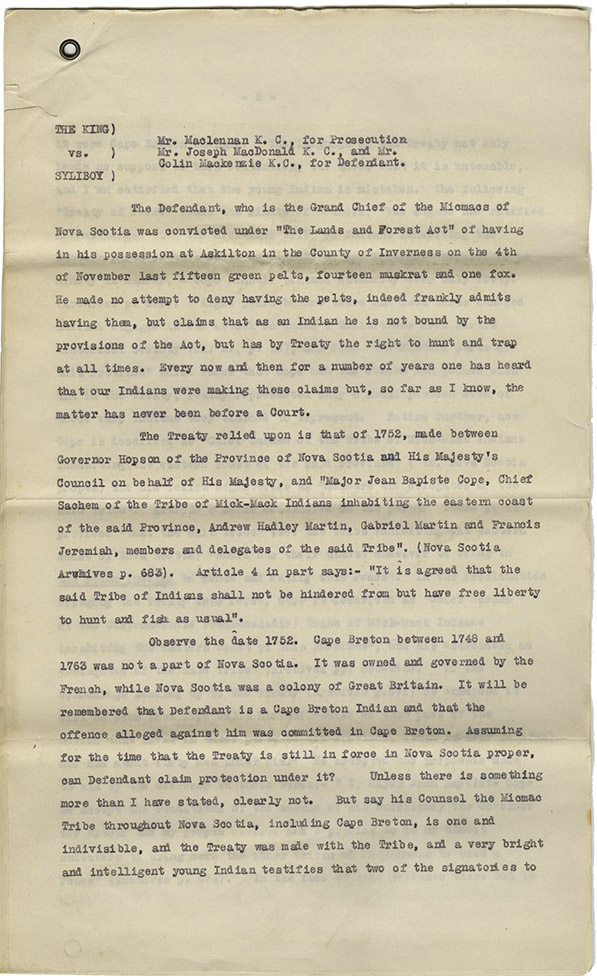 In 1927-1928, Grand Chief Gabriel Sylliboy was arrested and convicted under the Lands and Forests Act for hunting muskrat and possessing pelts out of season. Sylliboy believed he was hunting with full rights under Mi'kmaq Treaties. In 1985, the Supreme Court of Canada overturned the Sylliboy decision. In 2017, Grand Chief Gabriel Sylliboy received a free pardon and apology. Records of the 1928 trial and conviction are available in District Number Six (Inverness County) case files which forms part of Nova Scotia County Courts fonds and consists of case files for causes heard in Port Hood, N.S. 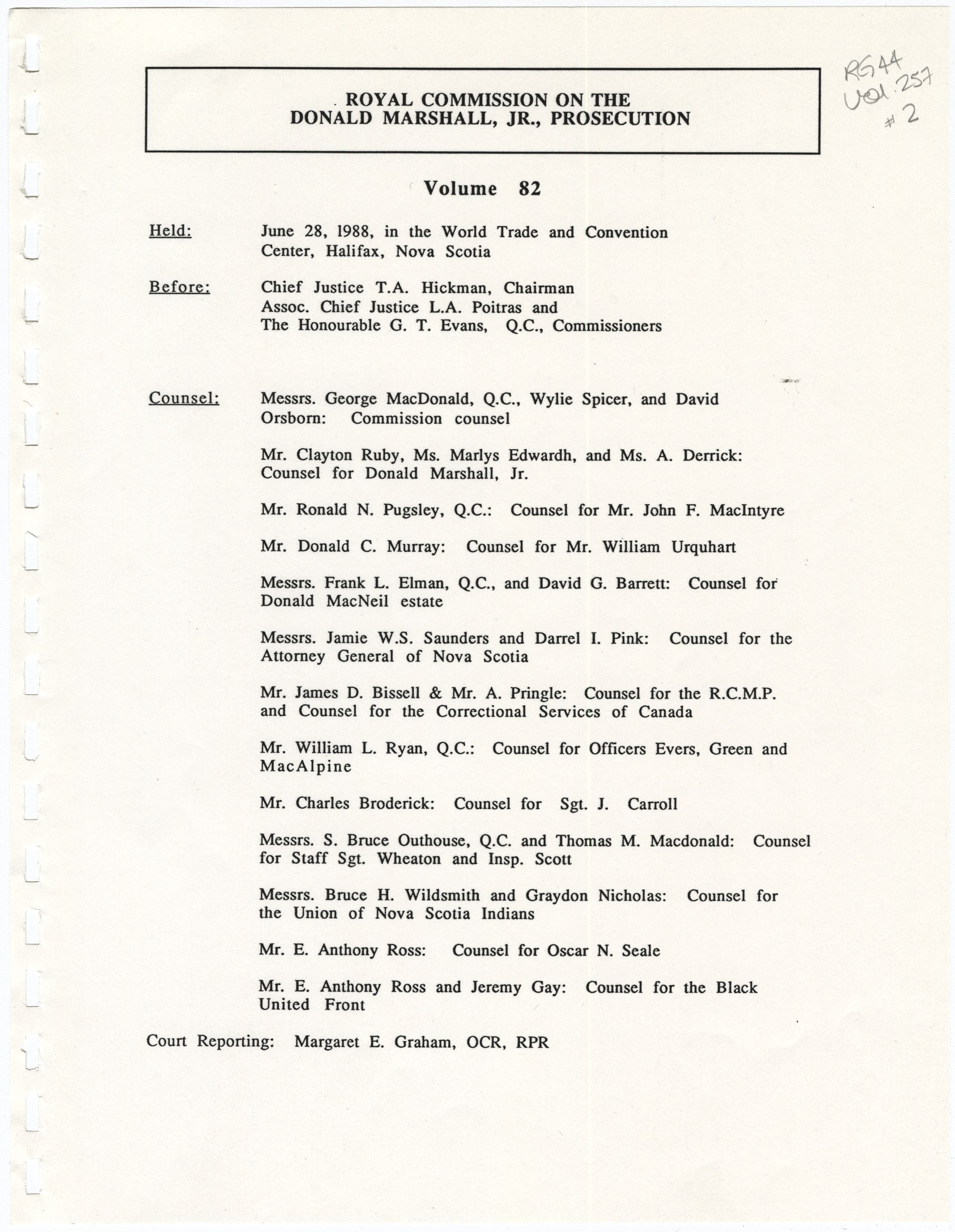 The Royal Commission on the Donald Marshall, Jr., Prosecution was struck by Order in Council on 28 October 1986. The commission held extensive public hearings in Sydney and Halifax in 1987-1988, accepting presentations from 114 witnesses and 176 exhibits. Consists of official records of the commission - transcripts, exhibits indexed by date and volume, and a Name Authority File explaining the role of involved individuals and groups. 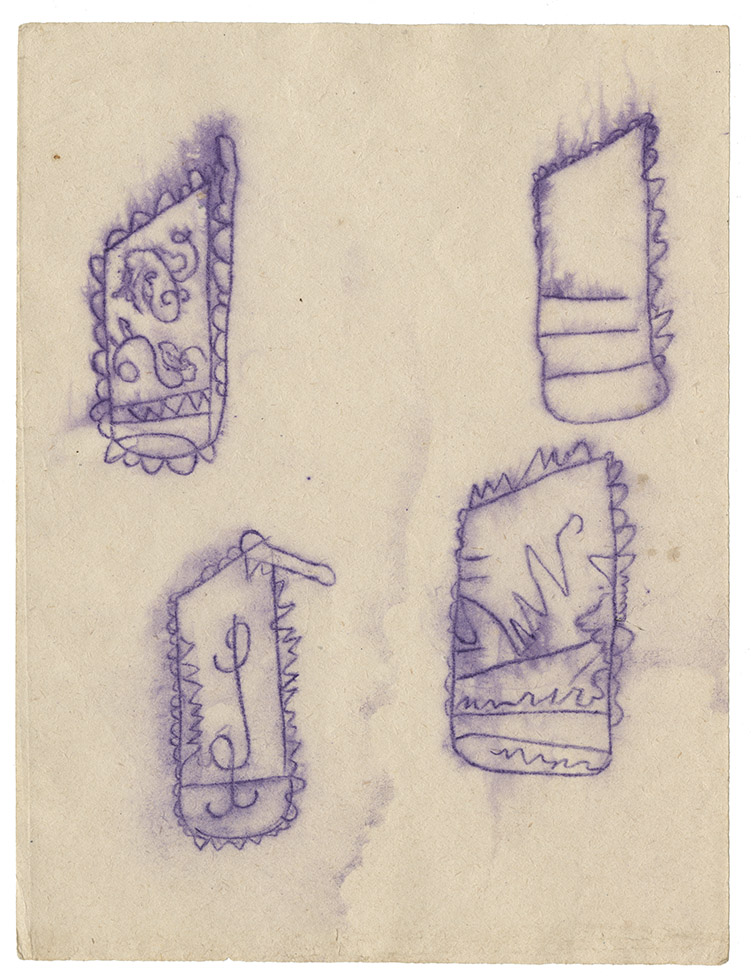 In 1887-88, George Creed, the postmaster in South Rawdon, Hants County — but also a keen amateur ethnologist — spent time in Queens County, where he carefully made some 350 tracings from the Mi'kmaq petroglyphs cut into the rocks at Fairy Lake, Kejimkujik. These petroglyphs record and illustrate the period in history, just after European contact, when the Mi'kmaq were turning from traditional beliefs and old ways to a new faith and new ways.

Clara Dennis (1881-1958) was a Nova Scotian author and journalist; her field notebooks contain information on her many interviews with Mi'kmaq people, mostly during the 1920s, regarding their culture, traditions and spirituality, as well as their personal life stories. 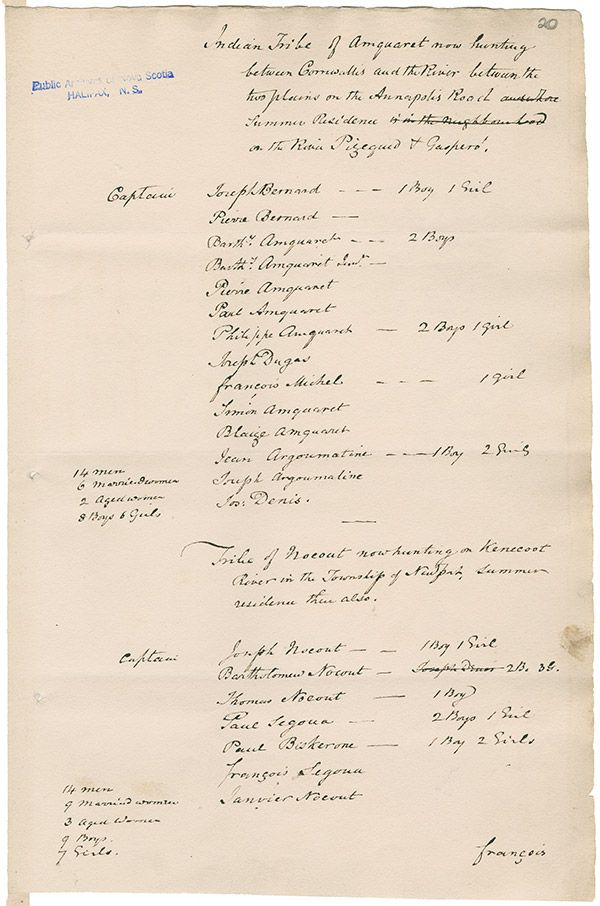 Isacc Deschamps (ca.1722-1801) was a merchant, office holder, judge and politician in colonial Nova Scotia; his personal papers contain significant evidence of interactions with the Mi'kmaq community at Windsor, where he served as truckmaster. 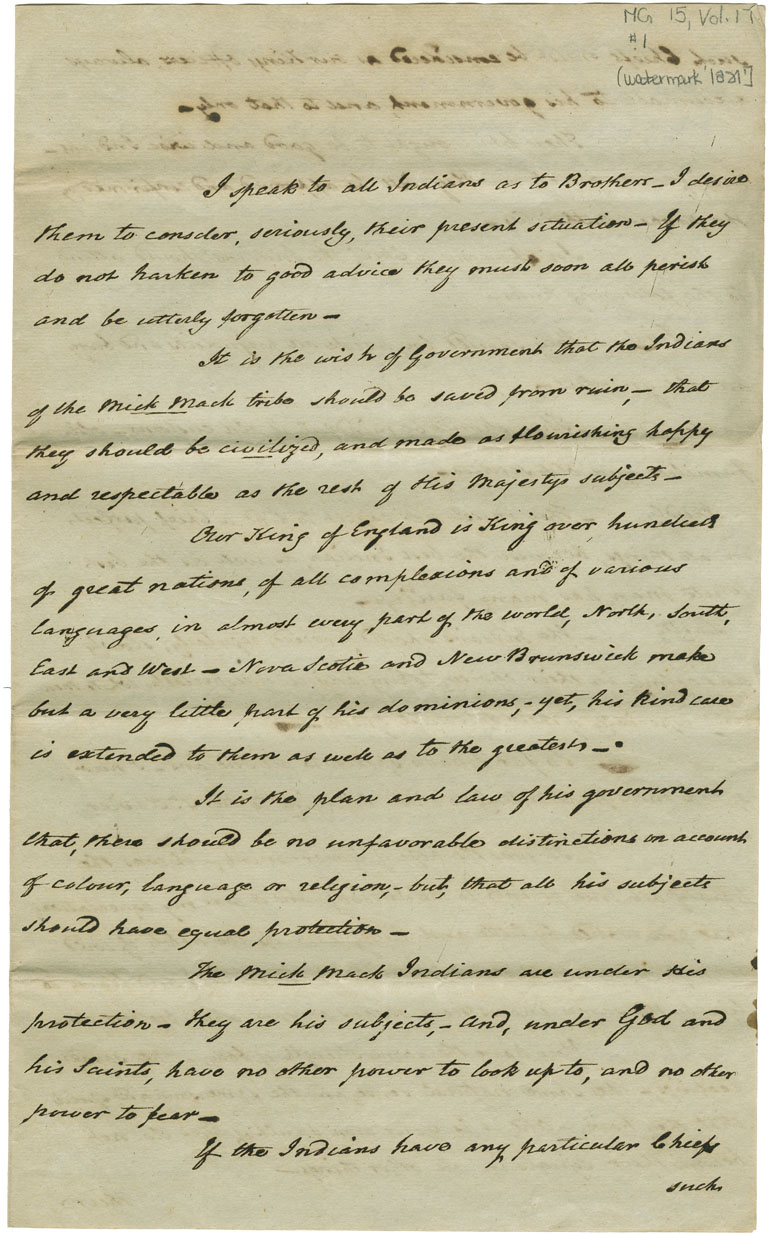 Digby County lawyer, legislator and judge, Peleg Wiswall (1763-1836), worked actively with the Abbé Jean-Mandé Sigogne during the 1820 and 30s, to establish an experimental Mi'kmaq settlement at Bear River; letters between Wiswall and Sigogne, correspondence with government officials in Halifax and financial accounts for the project, all provide significant information on development of the community.

The federally-appointed Agent for Indian Affairs in Yarmouth County from 1888 to 1896 was George R. Smith; his papers include correspondence to and from Ottawa, detailing interaction with the Mi'kmaq in southwestern Nova Scotia, and reflecting the early development of a large federal government agency charged with delivering services nationally to First Nations peoples.

George Henry Monk (1748-1823) was the Agent and Superintendent of Indian Affairs in Nova Scotia from 1783 to 1799, and again from 1807 to 1809; his papers — which are really government records — form part of the Monk family fonds, the originals of which are held at the National Archives of Canada.

Marion Robertson (1910-1998) was the author of two books about the Mi'kmaq — Red Earth: Tales of the Micmacs (folk tales) and Rock Drawings of the Micmac Indians (the Fairy Lake petroglyphs). Her papers include correspondence, research notes and draft chapters accumulated in writing these books, as well as related articles, newspaper clippings and ephemera.

The records of the Micmac Association of Cultural Studies (MACS) include administrative files and publications from 1971 to 1990, four monographs, and a medallion in commemoration of Chief Membertou.

Two miscellaneous volumes of research materials accumulated on topics of Mi'kmaq interest, including papers on Mi'kmaq land rights, lithographs of treaties and copies of documents at the National Archives of Canada.