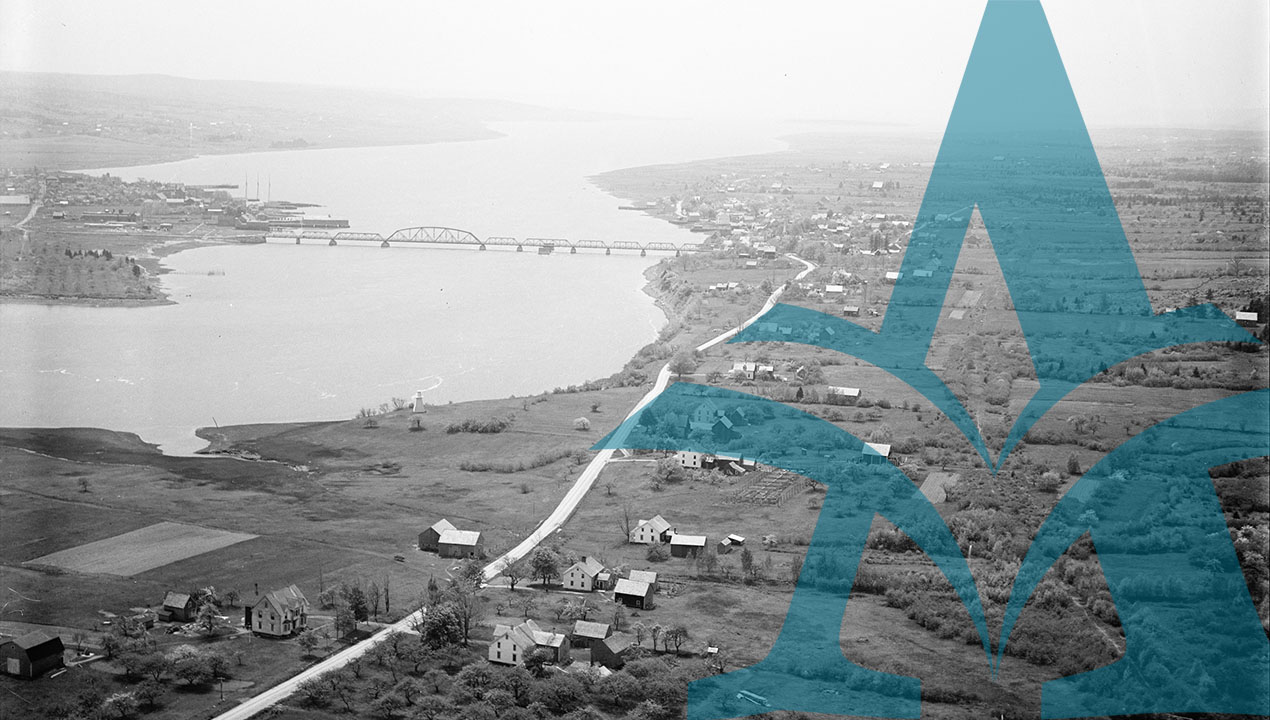 Nova Scotia from the Air

The first aerial photograph shot in Canada was taken over the Halifax Citadel in 1883, when Captain Henry Elsdale of the Royal Engineers attached a camera to a small balloon and sent it upwards. The camera was fitted with a time-sensitive automatic shutter release which enabled it to work at various heights, and at least one vertical photograph taken that day still exists, showing the Citadel from about 1450 feet.1

In the early decades of the twentieth century, photographers took oblique photographs from airplanes, shot from the cockpit at a 45-degree angle. The really interesting pictures were the vertical ones taken by photographers hanging out of the airplanes.

Aerial photography came into its own during wartime. The entire German trench system, for example, was photographed by 1915 and the results studied carefully by British command headquarters. During the 1930s when the Germans were flying dirigibles, the Hindenburg floated over Halifax for a considerable time one day in July 1936, on its regular flight to New York; it was later suspected that Nazi aerial reconnaissance experts had used the opportunity to photograph the Citadel, the Dockyard, the entire harbour, and various other military installations in the area.

Several years before, Richard 'Dick' McCully and Harold Reid — both Nova Scotians — pioneered commercial aerial photography in Atlantic Canada. McCully was an early pilot with Canadian International Airways. He convinced the company to establish a flying school in Moncton, where he became assistant flight instructor and operations manager; he also started a short-lived airline of his own in Moncton.

Reid was employed by his father, David S. Reid, in his photographic studios in Amherst, Saint John, and after 1924, Moncton, where the younger Reid sold photographic equipment and produced newsreels. In the 1930s he became the owner of the Moncton studio, which he operated as Reid's Picture & Equipment Ltd.

It was Harold Reid who took most of the photographs in the McCully aerial collection, while Marty Fraser, an ex-RCMP officer and military pilot, flew the plane. According to author Dan Soucoup, McCully was "convinced that the aviation age would provide great opportunities for exposing people to exciting new ways of seeing the world around them.... In May 1931, a young pilot named Marty Fraser flew Reid as far south as Fundy Bay and up into Kent County, and the result is a fascinating collection of aerial photos that reveal the landscape in wonderful bird's-eye views that capture an age long vanished."2

In the summer of 1931 Reid and Fraser also flew over Nova Scotia, where Reid took equally fascinating photographs — 221 of them survive, in fragile glass-plate negative format, and were acquired in 2012 by the Nova Scotia Archives. The collection is presented here, digitized in its entirety, for you to explore.

Reid and Fraser's flight path covered long corridors of the province, from Cumberland County through Colchester County and across to Halifax and Dartmouth, then down to Chester and Oak Island; and from Grand Pré and Wolfville south through the Annapolis Valley to Weymouth and Clare, and on to Yarmouth.

The collection provides significant aerial coverage of contemporary industrial activity and buildings including, among many others, Canadian Car and Foundry Co. (Amherst), Stanfield's Limited and Eastern Hat and Cap (Truro), the Imperial Oil Refinery (Dartmouth) and the Yarmouth Cotton Mills. Other images show the Experimental Farms in Nappan and Kentville, the Kentville Sanitorium, the Exhibition Grounds and Chebucto Road Airport in Halifax, the RMS Olympic in Halifax Harbour, and Oak Island in Mahone Bay.

Various colleges and universities were also photographed from the air — the Agricultural College (Bible Hill outside Truro), Acadia University (Wolfville), College Ste.-Anne (Pointe-de-l'Église), and Mount Saint Vincent College, King's College and Dalhousie University (all in Halifax). Last but not least, perched between King's and Dalhousie and clearly visible from the air, is the original Public Archives of Nova Scotia building, completed in 1931.