[embossed letterhead] HALIFAX DISASTER RECORD OFFICE, CHRONICLE BUILDING, HALIFAX, N.S.
3
With many other pubic institutions the 'Y' as the Khaki Clad and Boys in Blue call it, has suffered severely. The work organized at Pier 2, at Wellington Barracks and at the Naval Dock Yard is all temporarily suspended. The new, commodious and well appointed 'Y' building in the Dock Yard, one of the first, if not the very first of the kind to be erected in such a place, collapsed like a house of cards. The Secretary, Mr. Love, narrowly escaped with his life. Had he been inside instead of outside the building, he could not possibly have survived. This building had been dedicated only a few days before. The city building on Barrington St. also suffered by the shock, and it will take quite a few thousand dollars to put it in repair.
It, too, is a comparatively new building. What a transformation in appearance, in occupancy and in use ins one short hour! Immediately following the announcement that the danger of a second explosion had passed, the whole association force, aided by a body of volunteer helper[s] who quickly assembled, were at work removing the debris, preparing beds and cots and supplies of various kinds, which included dressings, food, medicine, etc. and in finding doctors and nurses, in anticipation of what was likely to happen: and it did.
Within half an hour people began to swarm into the rooms, first the hurt and a little later the hungry. it was all on a scale so vast and at a rate so rapid that one's head fairly reels in trying to recall it all: and it seems more like awakening from a bad dream, than something that really occurred.
The dinner which was cooking at the Y.W.C.A was brought to the Y.M.C.A.
and served to the workers and to the injured. By four o'clock a soup kitchen was established, the first barrel of soup having been sent by Mr. W. A. Hart of the "Green Lantern" Restaurant, who is a member of the Y.M.C.A. Board and also of the National Council.
[written in pencil top right: MG 1 vol 2124 number 45 b] 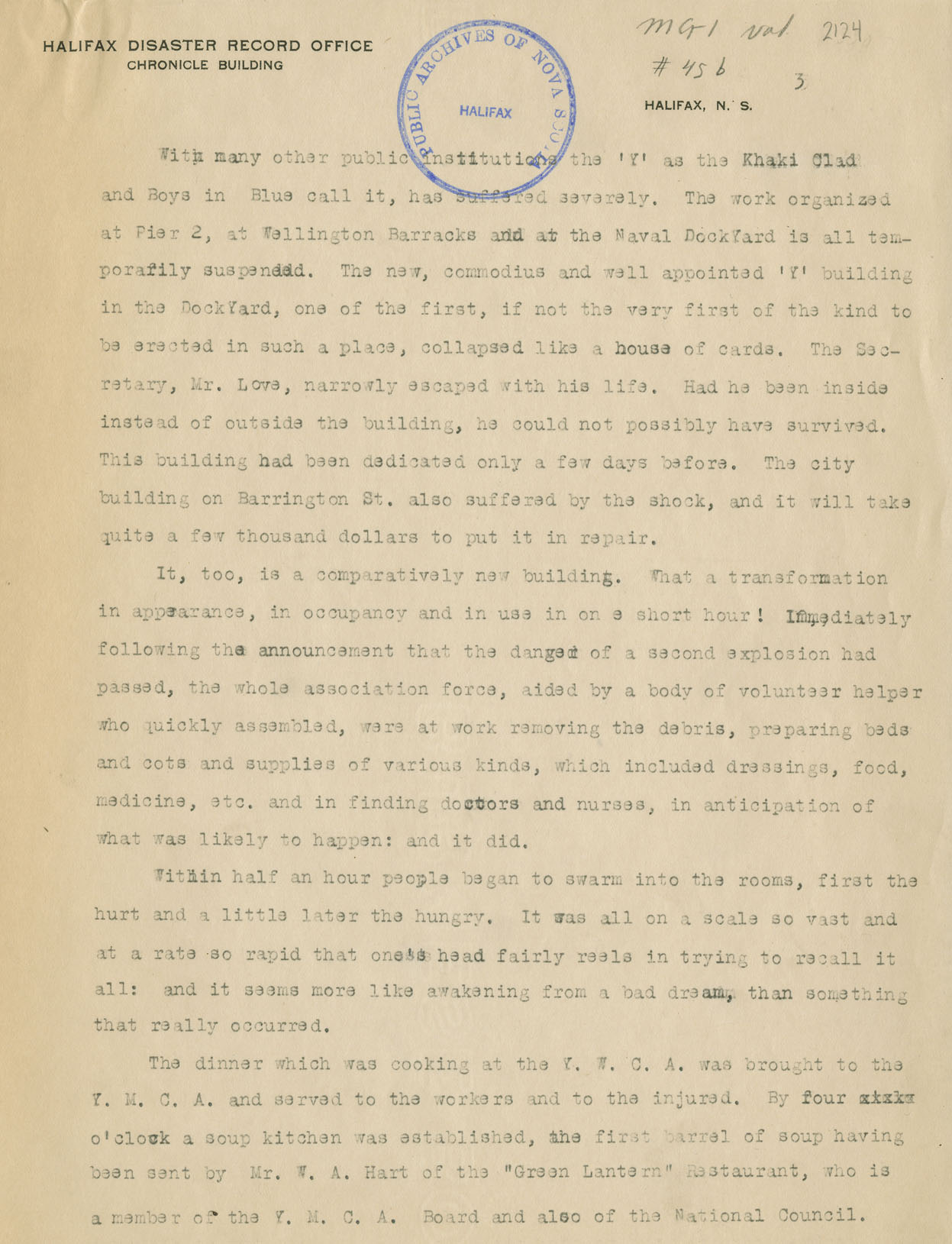