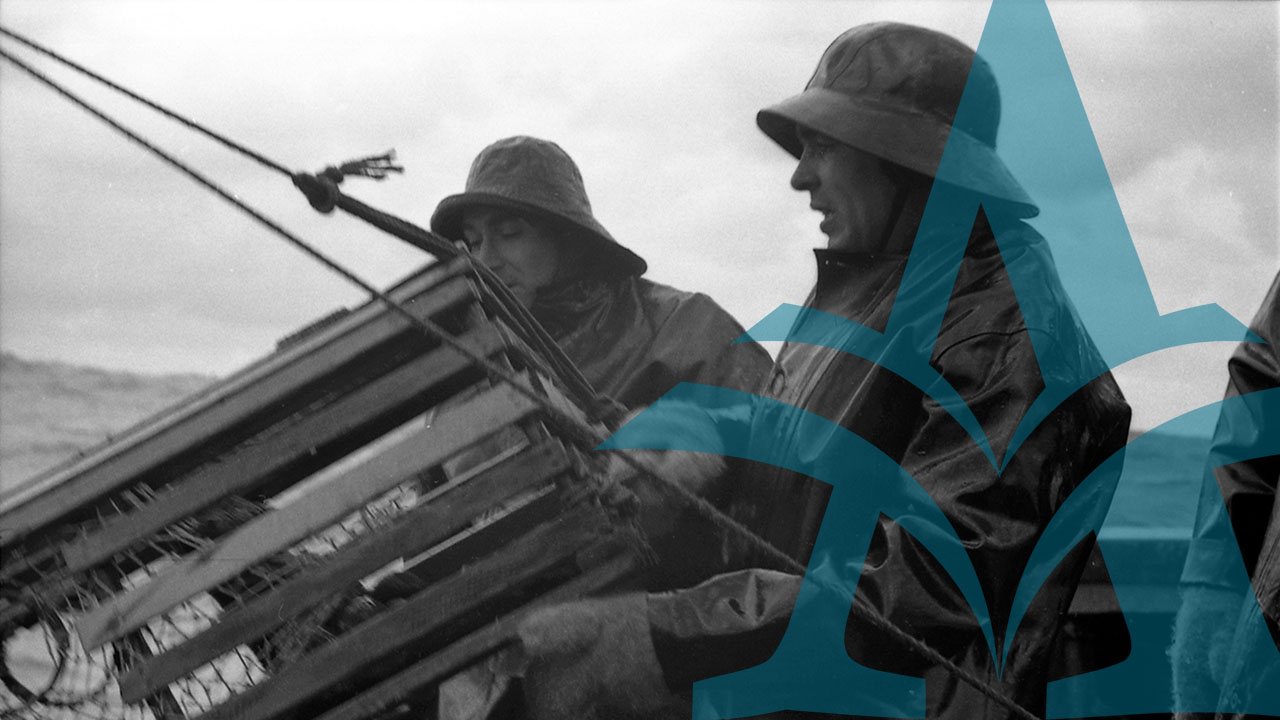 Setting a trap after rebaiting - Captain Bennett Comeau on the right

Boats beached for painting in preparation for the lobster season

On the clam flats in Clementsport

The virtual exhibit presented here honours and celebrates both the people of southwestern Nova Scotia, especially their relationship with the sea, and the work of John Collier Jr., one of America's leading twentieth-century photographers.

'Fishing Fundy Waters' was first developed as a traditional exhibit for gallery viewing by "The Wilson Collier Committee" which is affiliated with the Western Counties Regional Library. For this exhibit, the committee consisted of Trudy Amirault, Robert Hersey, David Irvine, Nola Jeffrey, Alexander Leighton (now deceased), Jane Murphy Leighton, and Virginia Stoddard. The goal of the committee has been to promote awareness and appreciation of local history.

As a gallery exhibit, "Fishing Fundy Waters" was launched in 2006 at the Isaiah W. Wilson Memorial Library in Digby, following which it toured the eleven branches of the Regional Library. It came to the Nova Scotia Archives and Record Management in Halifax during the summer of 2007 where a program similar to the original launch was given.

Nova Scotia Archives is pleased now to partner with the Committee in presenting the exhibit in its entirety, for an Internet audience to explore and enjoy.

Please note: The exhibit is on permanent display at the
Isaiah W. Wilson Memorial Library in Digby, Nova Scotia.

From the Wilson Collier Committee:

John Collier, Jr. (1913-1992) was one of the leading photographers of the twentieth century. He captured on film images of people and places as far apart as the Mackenzie River in the Northwest Territories of Canada to the high Andes of Peru, of young and old people in hard times and in good.

Collier's hearing was impaired following an accident when he was young, an event that may have helped him develop skill in making vivid what the eye can see. He was aided in this by his wife Mary, herself a photographer, and by his son Malcolm, who followed in his footsteps.

John Collier came to Nova Scotia at the invitation of Alexander Leighton whose long-standing love of this area led him to develop a proposal to the Rockefeller Foundation for funds to create a photographic record of everyday work and activities. The attendant grant made it possible for Collier to pursue this goal during 1950 and 1951. Himself a lover of the sea and of boats, Collier was particularly attuned to the fishing industry, images of which constitute "Fishing Fundy Waters". The exhibit is a vivid historical overview containing photographs of men with lobster traps, men whose boats drag for scallops, of men who dig for clams with hacks and buckets, men entering weirs, men in dories, men taking the measure of lines, as well as many other images of men doing the varied tasks that made up the fishing industry at the mid-point of the 20th century.

Titled 'Fishing Fundy Waters', this Exhibit gives the story of an evolving industry, an industry often as well known to the women who stayed at home as to the men who ventured out in all kinds of weather to reap the resources that have been a backbone and major source of livelihood to this area.

We are pleased to present now the original exhibit in virtual format, in collaboration with the Wilson/Collier Committee and as a companion piece to 'Women of Digby County, 1950'.