Halifax As Seen From the Citadel 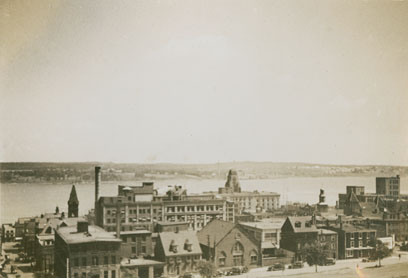 D.C. Harvey,"From the Citadel" appeared in Port and Province, September 1937. The Provincial Archivist of Nova Scotia commented on the view from Citadel Hill and noted that at sunset and twilight "...the contrasting stimuli of land and water, hill and plain, tree and flower, barrack and university, church spire and brick warehouse, public building and private residence, all combine to produce a harmonious, if composite picture of Halifax as it was in 1749, as it is in 1936, and as it may be in the years to come."

Harvey concluded his article with in a similar tone:

"The hopes and aspirations of the past have been recorded while the sun has set and twilight has gathered; but the ghostly projections of the future have become shrouded in darkness."