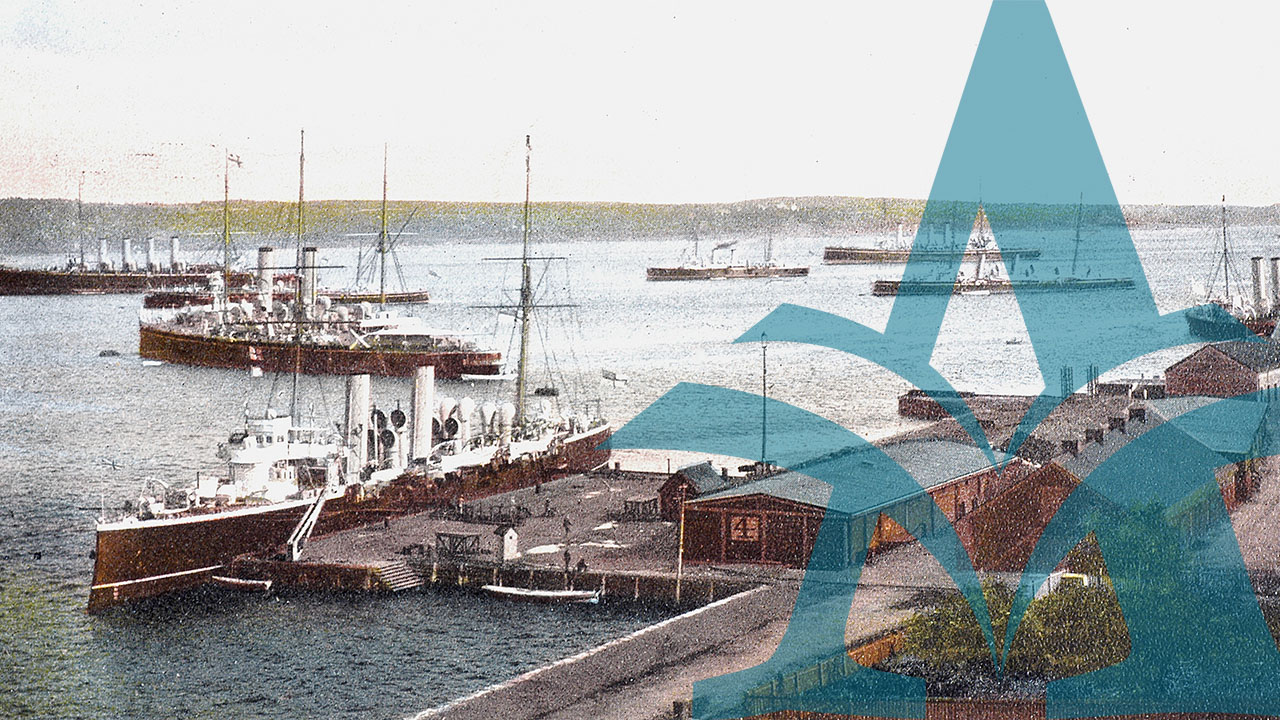 The Royal Navy was a presence in Nova Scotia waters from almost the first days of British colonization. In the seventeenth century, as control of the territory passed back and forth between France and England, British war-ships were occasionally sent into the Bay of Fundy to support military actions and strengthen the fragile claim that Britain asserted over the settled French and Mi'kmaq population.

With the Treaty of Utrecht in 1713, the colony became and remained British. Naval vessels continued to visit Annapolis Royal sporadically; it continued as the microscopic capital of Nova Scotia, with a military garrison and governing council. Naval operations also included occasional stops at Canso on the far northeastern coast, established as a military outpost to protect the fishery and maintain a watch over French operations at Louisbourg in Ile Royale (Cape Breton).

In the years leading up to the Seven Years' War in America (1755-63) expeditions against Louisbourg drew the Royal Navy increasingly into Nova Scotia waters, and after Halifax was established in 1749 as the new capital, the navy did not leave. The location for Halifax was specifically chosen because of its huge protected harbour, its deepwater potential, and its relative proximity to Louisbourg; when a careening yard was established in 1757 to repair naval vessels, the community's future was assured. Dreams of empire, plus the realities of war, rebellion and naval supremacy, all guaranteed a continuing British presence in Nova Scotia until the early 1900s.

To secure its presence and preeminence in western waters, after the 1740s the Royal Navy established a squadron dedicated solely to patrolling and serving British interests in North America and the West Indies. Halifax was the base of operations; increasingly after 1800 the Royal Navy was not seen in Nova Scotia outside the capital. Its presence, impact and influence on the headquarters city, however, were enormous. With the exception of a brief sojourn in Bermuda, the admiral commanding the North American Station resided in Halifax, and the city was a beehive of naval and fleet activity.

The images selected for this virtual exhibit develop and illustrate the relationship between the Royal Navy and its Halifax homeport, while at the same time taking into account the British naval presence elsewhere in the province. The selection of documentary art and historical photographs depicts the change in naval warfare and armament — from huge, clumsy but otherwise magnificent men-of-war, to the sleek and fearsome steel vessels of the late nineteenth and early twentieth centuries. Once the change from sail to steam was perfected, Halifax became strategically important as a coaling station — these new behemoths of the sea had to be re-fuelled regularly.

The presence of both the British fleet and the British military gave Halifax a cosmopolitan air that still resonates faintly in the city's identity. Ties to empire were unusually strong and remained so, long after the creation of Canada in 1867. The unending parade of British naval vessels in and out of the harbour over 150 years, and the economic impact made locally by the equally unending need for their repair and provisioning, instilled in Haligonians a solid belief in the mightiness of the British Empire.

The city's patriotic spirit was perhaps most evident when British royalty came to call — using Halifax as their port of arrival, and escorted or welcomed by the Royal Navy's best vessels. The Marquess of Lorne and his wife Princess Louise, for example, arrived in 1878 on board the Allan Line steamer Sarmatian, to be met by a flotilla of the squadron's finest; while in the city, the Marquess was installed as Canada's new Governor General.

The Royal Navy presence permeated community life in Halifax; with ships and personnel stationed in the city for long stretches at a time, there was much interaction and integration, especially around sports activities such as yachting and rowing. The social scene was active as well, and over the years many of Halifax's finest young women became naval brides.

The sense of empire and might, the pride invested in vessels and men, is perhaps best captured in the photographs taken by the Notman Studio from the late 1860s. These images bring vividly to life the men of the Royal Navy and the everyday world they lived in — from ratings to admirals, to seamen with their pet monkeys.

The arrival of the twentieth century brought retrenchment of Britain's seapower; needs and interests shifted from North America to Europe and elsewhere, especially in the years after World War I. The army left Halifax in 1906, and in the following years the Royal Navy also gradually sailed away from Nova Scotia waters, in time transferring the Halifax dockyard to Canadian control. We forget today that Canada did not have a navy until 1910, when two vessels were acquired from Great Britain; as the images here reveal, one of them, HMS Niobe, had previously served on the North American Station and was already well-known in Halifax.

The images in this exhibit cover the years 1751 to 1939 and are presented in roughly chronological order. For the period after 1850, when many vessel photographs are featured, the presentation is in alphabetical order by vessel name.