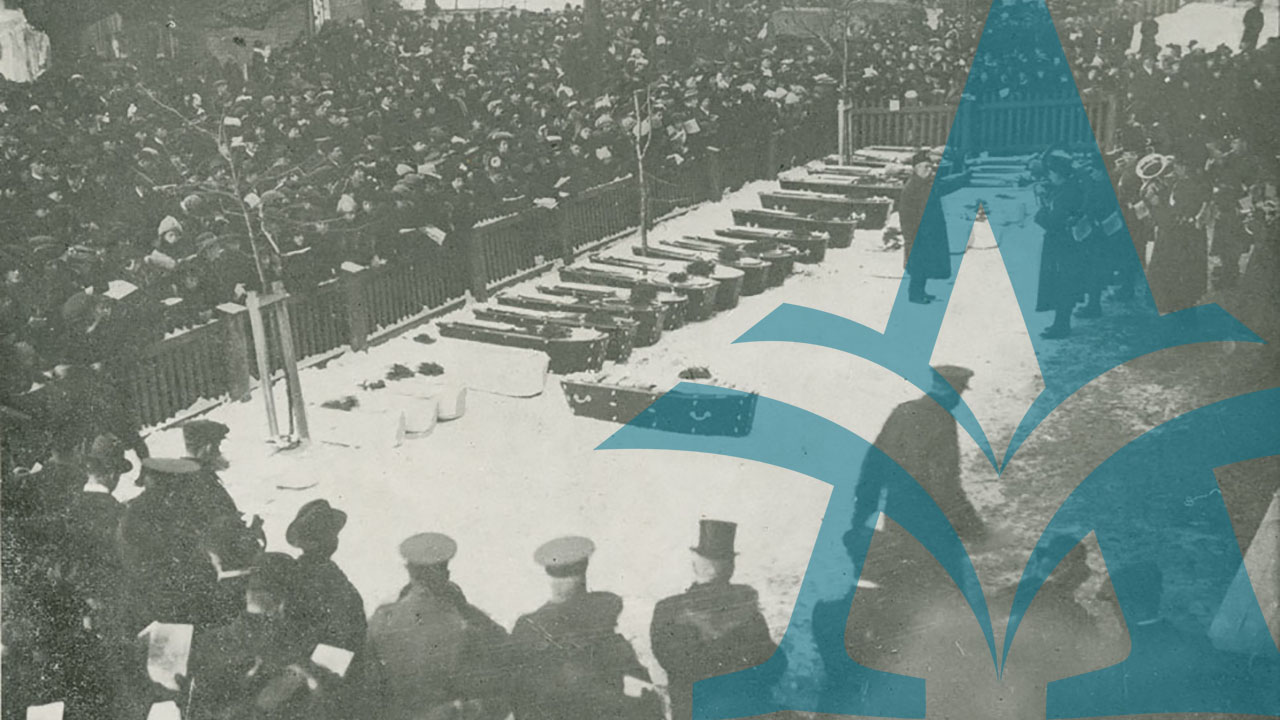 Roman Catholic Service at Funeral of the Unidentified Dead

Protestant Service at Funeral of the Unidentified Dead

The Halifax Explosion Remembrance Book was originally developed in 2002 as a commemorative project sponsored by the Halifax Foundation and its chair, the late Edmund Morris, a former city mayor, to mark the 85th anniversary of the Halifax Explosion. The objective of the project was to compile a definitive listing of the known dead from the disaster of 6 December 1917. Two end-products resulted: a fully searchable electronic database for extended research purposes; and an abbreviated, limited-edition version produced in paper format for general display and reference use.

The database version of the list of those that died in the Halifax Explosion currently featured on this Website is an expanded and updated version of the one developed in 2002. The revision incorporates details from a newly-discovered source of information, and adds many corrections provided by visitors to this Website.

The newly-discovered source of information is an official register of Explosion fatalities. So great was the catastrophe of 6 December 1917 that within days, government officials decided to open a special ledger-book in order to record the names and details of the victims — both those who died immediately and those who succumbed to injuries and disaster-related illnesses in the weeks and months following the Explosion. When the register was closed in December 1918, it contained 1,631 entries.

Over the years the ledger was kept in the Nova Scotia Vital Statistics Office; in 2004 it was transferred to the Archives. The 1,631 names recorded in the book have now been integrated into the existing electronic database and all 272 pages in the register have been digitized. These pages now form part of the revised Website, linked directly to individual names in the database.

The database now contains 1,782 names — an enduring record of the men, women and children known to have died either in the Explosion, in the days immediately after, or in the following months as a direct result of the events of 6 December. The supporting information provided in the database, fully referenced and sourced in this online version, was compiled by searching various records held at Nova Scotia Archives.

The original chief source of information for the project was the list of 1,535 victims published in McAlpine's Halifax City Directory for 1918, and entitled "Names of the Identified Dead Killed in the Explosion at Halifax 6 December 1917". This source was also used in compiling an augmented list published in 1998 by the Genealogical Association of Nova Scotia (Nova Scotia Genealogist, XVI (2), 1998; 94-112); the latter list was used as well in compiling the current database.

Supplementary information such as age, family name, religion, date of death and place of burial, as well as additional names of victims, was located in the records of the Halifax Relief Commission. A systematic search of contemporary local newspapers such as the Halifax Herald and the Morning Chronicle also supplied, in some instances, date of death, burial place, religion and names of family members. Other records consulted included church burial records, cemetery records and miscellaneous published items. See sources The availability now of the newly-discovered death register from 1917-18 provides yet another authentic source of original information about Explosion victims.

In working with this broad landscape of source materials, various discrepancies in age, religion and place of burial have been identified. Other relevant details, such as the names of women and children, were also sometimes omitted. For example, unless a widow filed a formal pension claim for loss of support from a husband killed in the Explosion, her given name frequently cannot be determined from other available records. In the case of babies, their given names are often not listed. Discrepancies have also been identified regarding the location of burials, most commonly with reference to Fairview Lawn and St. John's Cemetery, because the two are located side by side.

Due to the devastation caused by the Explosion, it is unlikely that the names of all victims will ever be captured. The disaster took place at the height of the First World War, a time when there were many newcomers and transients in the city; it is possible that some of their names were missed; entire families could have been excluded for the same reason.

The database also includes many names of individuals which are similar to others appearing in the same listing-nevertheless, each victim was given a different body number at the time of the disaster. These similarities originate in the confusion of the event, when given names, ages and street addresses were frequently supplied by second- and third-hand informants. One wonders therefore how many of the dead were incorrectly identified in the chaos of the immediate aftermath.

The printed versions of the 2002 Remembrance Book include the names of identified victims, their ages, their local residential addresses at the time of the disaster, and their subsequent places of burial. Reference copies are available at several libraries within the Halifax Regional Library system and the Maritime Museum of the Atlantic.

This website has been updated to include new information, often provided by survivors' families, and verified from archival sources. As a result, researchers will notice differences between this online database and the printed copies of the 2002 Remembrance Book.

Online visitors may also want to visit our Halifax 1917 Explosion ~ Online Resources page to learn more about this defining event in Halifax's history.