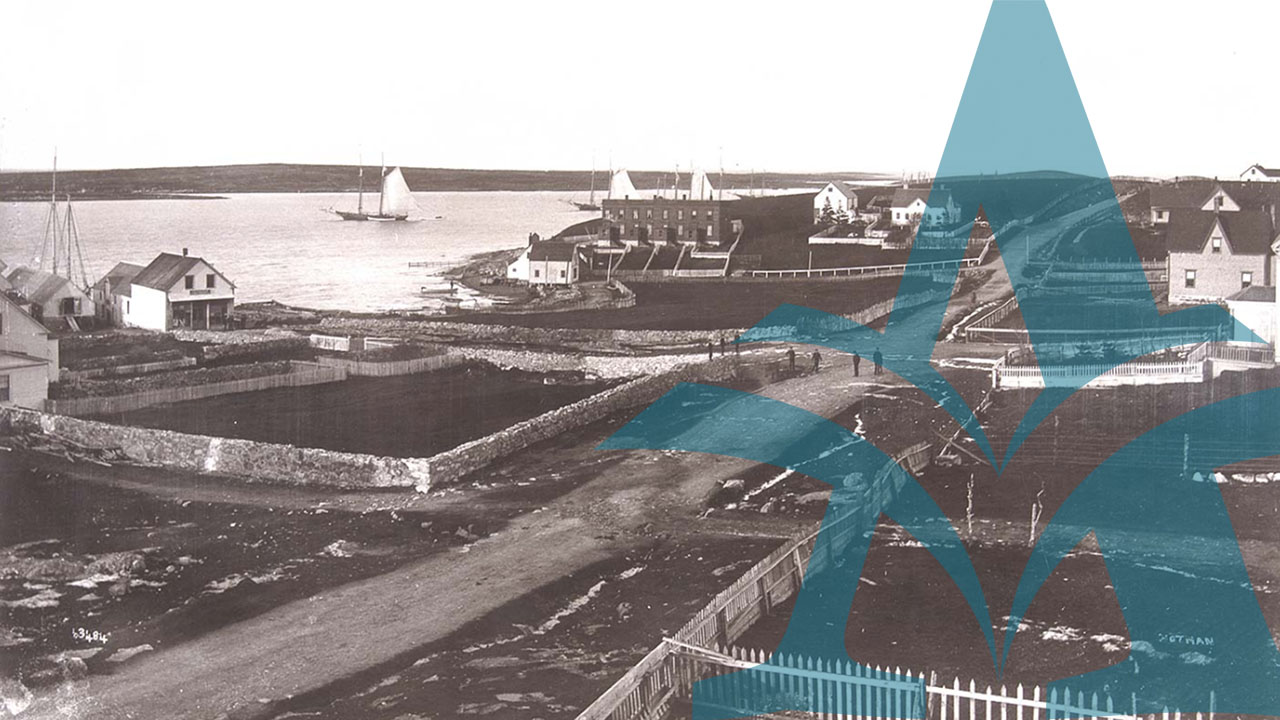 View from the Baptist Church, Canso

Take a virtual tour of Nova Scotia's ports and harbours, travelling back in time via photographs, documentary art, postcards, sea charts and early government records. The time-tour presented here extends from Mi'kmaq petroglyphs to colour photography — and in between, captures at least three centuries of Nova Scotia's relationship with and dependence on the sea.

The exhibit is designed so that you can enter the name of a community in the Search Box, or select a county from the pull-down menu — or view the exhibit in its entirety, starting in Halifax County and proceeding clockwise around the mainland to Cape Breton Island and on to Guysborough County. Many of the images are comparison views, so that you can examine a particular port or harbour from different points in time, looking for growth, decline or substantive change as communities engaged in daily life built around the sea and its opportunities.

In this exhibit you will begin to see how Nova Scotians have taken advantage of the sea at their doorstep, and how it has in turn shaped their existence and fortunes. The items presented here have been selected to focus on the impact which settlement has made, over time, on the interface between land and sea: wharves, industrial shipping piers, shipyards and slipways, customs houses and merchants' stores, fishing fleets, fish plants, ferry services and all manner of activities carried out at the water's edge around the fishery and the carrying trade — all these aspects come to life in the images displayed here.

The earliest impact of European settlement, namely the appearance of strange, lofty vessels under sail, is remembered in Mi'kmaq petroglyphs that capture the 'foreign-ness' of these craft as they intruded into traditional waterways and harbours. The arrival of these outsiders some four centuries ago, upset forever the delicate balance and rhythm of the aboriginal way-of-life. The long struggle of the Mi'kmaq to preserve and live out this harmonious dialogue with the water and the woods is also acknowledged by the photograph taken at Bear River in the 1880s.

One of the strongest messages conveyed by the historical photographs in this exhibit is the wildness of Nova Scotia's coastline and the unrelenting presence of the ocean. A selection of sea-charts shows how, over time, the harbours, headlands, shoals and soundings were identified and captured on paper by hydrographers, so that mariners could venture forth with some degree of safety. Going to sea and coasting along the shoreline remained risky business, however, and we are left wondering today how the early settlers adapted so quickly and so intrepidly.

But adapt they did! The selection of documents from the Easson family fonds features some of Nova Scotia's earliest surviving records from the private sector. John Easson came out to Annapolis Royal in 1737 as a master artificer with the Board of Ordinance; before long, he had acquired a sloop and was running a brisk trade with Boston, providing his customers there with hay and produce; in the 1750s, he expanded into illegal trade with the great French fortress at Louisbourg.

Easson employed others, mostly Acadiens, to captain and crew his vessels; from their earliest days in Nova Scotia, they were skilled in navigating the treacherous tides of the Bay of Fundy. After the Expulsion of 1755, which removed them from their original farmlands and communities, many returning Acadiens established themselves instead as intrepid fishermen and coastal traders in southwestern Nova Scotia and Cape Breton Island. Easson had many contacts as well with the Mi'kmaq, as they continued their uneasy interface with the encroachments of British settlement and government.

The selection of government records presented here is intended as a brief introduction to aspects of Nova Scotia's early trade and commerce, showing an economy heavily dependent on imported goods — and a colonial government intent on raising money to cover the cost of governing, by levying taxes and fees on the ocean-going trade. Quarterly returns from the 1830s list commodities entering various Nova Scotian ports; documents from Yarmouth in the 1850s and 60s show the growth of trade and a parallel growth in government regulation; and finally, extracts from the Port of Halifax Entry Fee Book in the 1880s, provide a 'snapshot' of marine activity in an international harbour at the height of the Age of Sail.