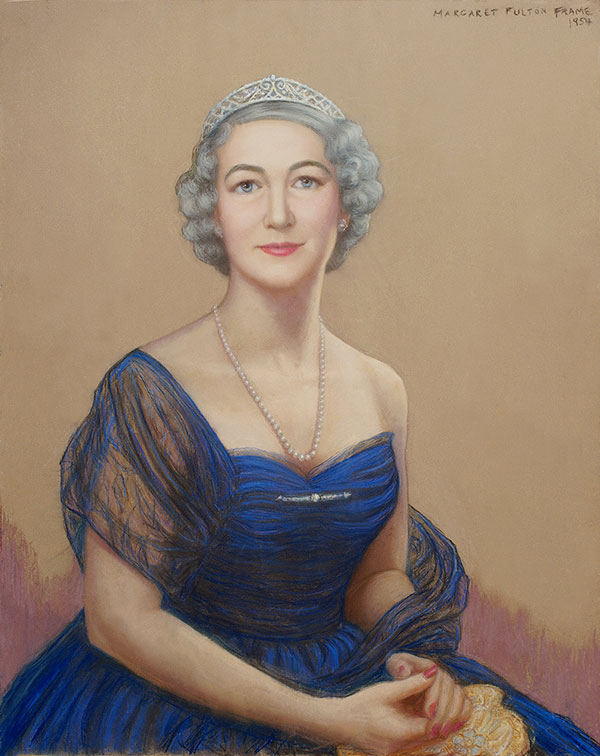 Margaret Millicent McCurdy, the daughter of Robert Notman Ball and Margaret (King) Ball, was born 8 November 1898 in Woodstock, Ontario. She attended local schools in Woodstock and later took courses at the Margaret Elton School of Expression and the Toronto Conservatory of Music. Margaret Ball married J.A.D. McCurdy in Woodstock on 2 April 1919 and served as the "first lady" of Nova Scotia between 1947 and 1952. She died on 4 December 1977.

In 1954, Mrs. McCurdy sat for the portrait artist Margaret Fulton Frame, a Nova Scotia native born in Oxford, N.S., in 1902. At age 11, she studied under James Henderson and Inglis Sheldon Williams after her family moved to Regina, Saskatchewan. From 1922 to 1924 she studied at the School of the Museum of Fine Arts, Boston, where she was encouraged by John Singer Sargent and studied under Philip L. Hale of Boston. In 1922 she figured in an exhibition at the Royal Canadian Academy. She studied one term at the California School of Fine Arts in San Francisco in 1923. Thereafter she travelled to Paris and studied at the Ecole des Beaux-Arts for four years under Emil Renard and at the Academies Castelucho and Delécluse. Two of her portraits were presented at the British Empire Exhibition in London in 1924 and 1925. In 1926, she held her first solo exhibition in Paris. She married Squadron Leader Hazlitt Seymour Beatty, R.A.F, on 10 July 1943 and died in Napean, Ontario, on 18 December 1985, and was subsequently buried in Pine Grove Cemetery in Oxford, N.S.