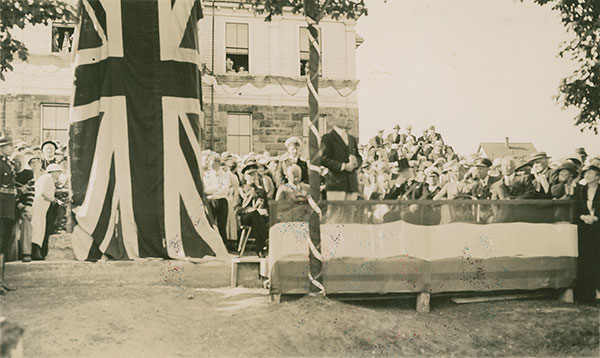 The Canadian Flying Clubs Association erected a cairn in front of the Victoria County Court House, Baddeck, commemorating the work of the Aerial Experimental Association. Before the unveiling ceremonies, ten planes flew overhead and gave an exhibition of formation flying and manouevres. Lieutenant-Governor W.H. Covert unveiled the cairn and Lieutenant-Colonel George Drew (Ottawa) J.A. Wilson (Controller of Civil Aviation in Canada), R.J.R. Nelson (Vice-President of the Canadian Flying Clubs Association) and J.M. Campbell (President, Baddeck Board of Trade) addressed the crowd. Then "Amid thunderous applause, Mr. McCurdy arose to reply to the eulogies voiced by the speakers and he was followed by Mr. Baldwin, who also responded to the kind sentiments expressed. No extended remarks were made by either." [unnamed and undated newspaper clipping, probably about 16 August 1934]