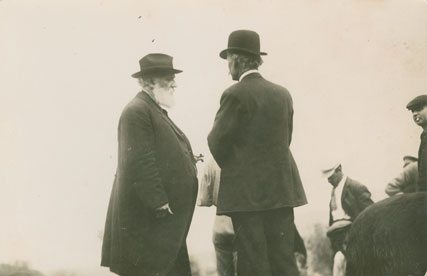 J.A.D. McCurdy's glowing admiration for Alexander Graham Bell and his accomplishments is evident in his address to the Telephone Association of Canada's annual meeting in Digby, 1 July 1948. McCurdy recalled, "Much work was performed by Bell and his assistants in conducting experiments of all kinds, some of which led to important inventions of great uses to mankind. Shortly after the invention of the telephone, Bell became very much interested in the flight of birds, so that his mind began to turn to mechanical flight, and for a great many years he experimented in his laboratory on the theory of surfaces, and propellers, and later constructed kits which were flown on the hillside adjoining the laboratory, from which he collected data concerning air currents. I well remember the many discussions he had with members of his staff in attempting to gauge accurately the result of these tests. Every man's opinion was listened to, and he showed a courtesy and understanding which I believe few men have ever attained. To my mind, Bell was probably the outstanding man in the world of his century, having regard to what he gave to humanity and also the wonderful inspiration and incentive that he imparted to all those fortunately to know him." The Monthly Bulletin, vol. XLI, no. VII, July 1948, p. 128