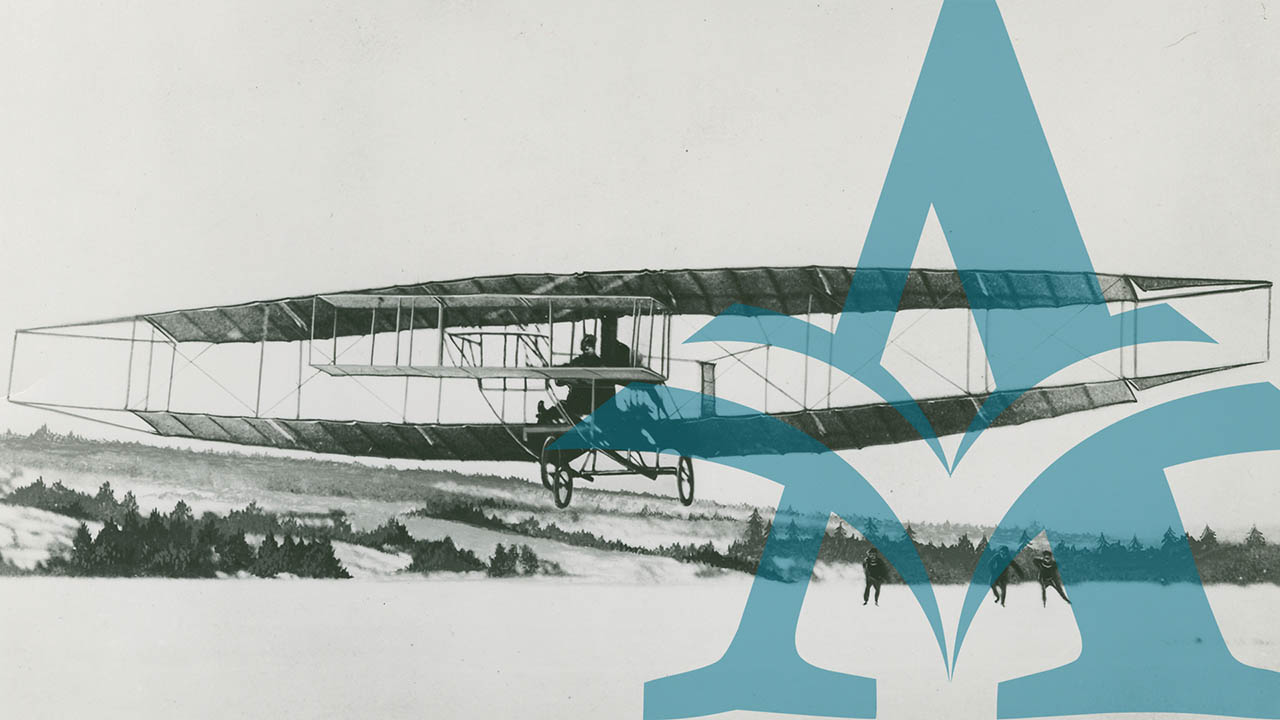 On 23 February 1909 at Baddeck, Nova Scotia, J.A.D. (Douglas) McCurdy became the first person to successfully fly an airplane in the British Empire. To celebrate the centenary of this achievement and to honour the memory of McCurdy, whose personal papers have recently been donated to the Nova Scotia Archives, we are pleased to present here a brief retrospective of his life and career, through a selection of photographs and documents.

John Alexander Douglas McCurdy was born in Baddeck in 1886; at an early age he caught the attention of Alexander Graham Bell, famed scientist and inventor, who from the late 1880s spent part of each year in the small Cape Breton community. After graduating in mechanical engineering from the University of Toronto in 1906, McCurdy joined F. W. ('Casey') Baldwin and Lieutenant (USN) Thomas A. Selfridge in the Aerial Experiment Association — a group of brilliantly inventive young men who coalesced around Bell to explore the potential of tetrahedral kites and 'heavier-than-air' flying-machines.

Working initially in Hammondsport, New York, with the American 'aeronaut' Glenn H. Curtiss, the AEA built and successfully flew the Red Wing (Selfridge), the White Wing (Baldwin), the June Bug (Curtiss) and the Silver Dart (McCurdy). No one had yet flown an 'aeroplane' successfully in what is now the British Commonwealth, however — until the AEA brought the Silver Dart to Baddeck in the winter of 1909 and McCurdy climbed aboard. In his own words,

"It was a brilliant winter day and the ice of Baddeck Bay was completely free of snow. We wheeled the aircraft out of its shed on the shore amidst the incredulous stares and remarks of a couple of hundred spectators who had gathered to witness the event. I having taken my seat, the machine was released and after a run of about a hundred feet, took to the air. I landed on the ice about half a mile away and taxied back to the starting point, and I think the thing that impressed me most was the look of absolute astonishment on the faces of the spectators."

McCurdy became Canada's first licenced pilot in 1910 and continued flying until 1916, when vision problems grounded him. He went on to become a pioneer in the Canadian aviation industry as an officer of the Reid Aircraft Company (1928) and the Curtiss-Reid Aircraft Limited (1929-39). During World War II, he was Assistant Director General of Aircraft Production in Canada. In 1947 he was appointed Lieutenant-Governor of Nova Scotia, serving until 1952.

McCurdy died in Montreal, 25 June 1961, and was buried the following month in Baddeck, overlooking the bay where he had flown into aviation history. February 23, 2009 marks the 100th anniversary of that first flight — a proud moment for Baddeck, for Nova Scotia and for Canada.