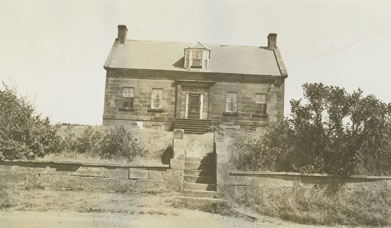 Paul McCulloch dates his house's construction some time between 1840 and 1870. He explains the stone used in his house in Heritage Trust of Nova Scotia, Affairs with Old Houses, p. 34:

"The hand-quarried sandstone had probably come from a quarry at nearby South West Mabou River. Only the front of the house has been 'dressed' or sanded smooth. On the other three sides, especially when the sun slants parallel to the wall, each stonemason's unique pattern of chiselling can be seen.

Some blocks have short, light, feathery strokes, as if a man had had a terrible hangover; others have the long vigorous strokes of a strong man who'd had a hearty breakfast."