[Draft of] letter from unnamed citizens of Shelburne to Chief Justice Blowers relative to the impressing of persons on board the Whiting: 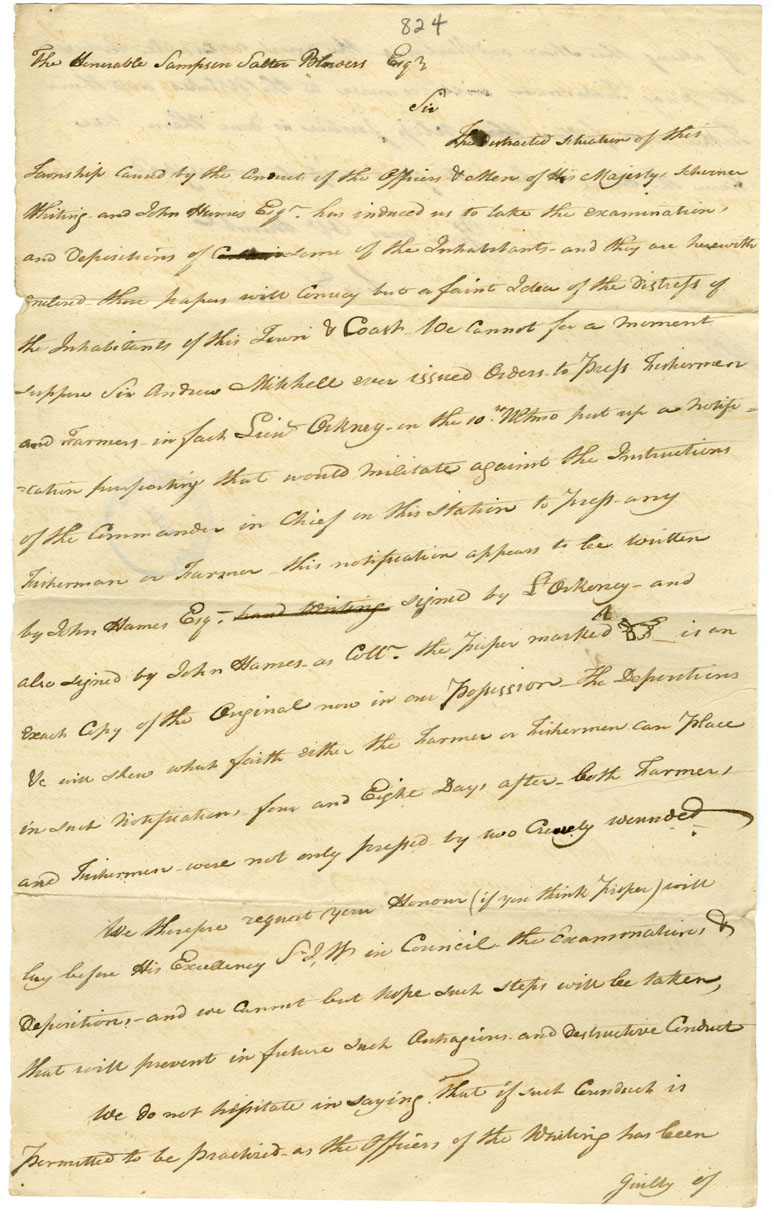 ''The distracted situation of this Township caused by the Conduct of the Officers & Men of His Majesty's Schooner Whiting and John Hames Esq. has induced us to take the examination and depositions of some of the Inhabitants and they are herewith enclosed - these papers will convey but a faint Idea of the distress of the Inhabitants of this Town & Coast We cannot for a moment suppose Sir Andrew Mitchell ever issued Orders to Press Fishermen and Farmers in fact Lieut Orkney on the 10th ultimo put up a Notification purporting that would militate against the Instructions of the Commander in Chief on this station.'' An exact copy of this notice is enclosed. ''The Depositions &c. will shew what faith either the Farmer or Fishermen can place in such notifications four and Eight Days after both Farmers and Fishermen were not only pressed but two Creuely wounded. We therefore request your Honour (if you think proper) will lay before His Excellency Sir J. W. in Council the Examinations & depositions, and we cannot but hope such steps will be taken that will prevent in future such Outrageous and destructive Conduct. We do not hesitate in saying That if such Conduct is permitted to be practised as the Officers of the Whiting has been guilty of allong this shore and Harbours the most valuable subjects the Young Fishermen will remove to the U States - and their Fathers will follow unless justice is done them.
Enclosures: Copy of Notice put up by commander of the Whiting, 10 July, above.
Depositions of Charles Bower, 29 July, Charity Fell and Anna Echlin, Aug. 1, above.
Record of complaints made by Mangham, Buchannan and Daniel Cormick; recommendation for protection for certain persons, above.