Part of letter to Nathaniel Whitworth apparently from his brother Charles. 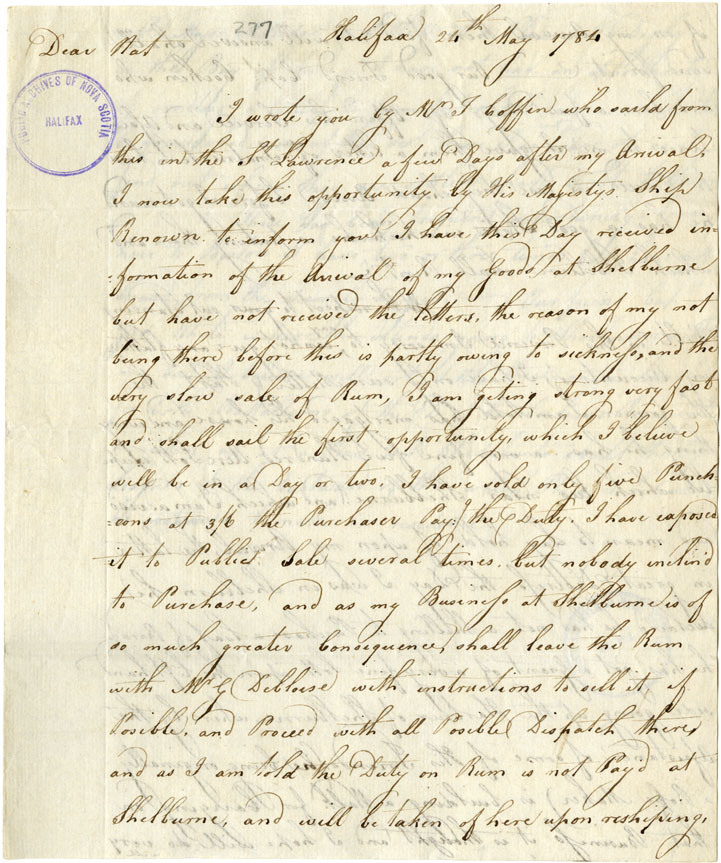 He has been detained in Halifax by illness and the slow sale of rum, but will sail for Shelburne at the first opportunity, since he has word of the arrival of his goods there. I have sold only five Puncheons at 3/6 the Purchaser Payg. The Duty; I have exposed it to Public Sale several times, but nobody inclin'd to Purchase, and as my Business at Shelburne is of so much greater Consequence, shall leave the Rum with Mr. G. Dobloise with instructions to sell it, if Possible, and Proceed with all Posible Dispatch there, and as I am told the Duty on Rum is not Pay'd at Shelburne and will be taken of[f] here upon reshiping, if on my Arrival there find it will answer shall send for it. Capt. Cocken will look after goods until his return; Cocken has a store which Charles may rent.
''With respect to your outstanding Debts in this Province I'm sorry to say cannot give any flattering Accounts of, I have only seen Miller & Hart the former I am told has mortgaged his house and everything he has, a very fine five Hundred Acre Lott excepted, which lies near Shelburne, and which I am advis'd and mean to Lay hold of upon my Arrival, the latter in great Distress the Day I was in Shelburn he declair'd he had not a Shilling to Purchase a loaf of Bread. he has got a Grant of a very fine lott upon the left hand side going up the Harbour of Shelburne, where by the Assistance of some of His Friends (he being originally a Rope Maker) is building a Walk for Carrying on that Business...Our friend Capt. Gid White is here he intends going to Shelburne with me but I believe will not Settle there, as the Lands for both Battallions of the D of Cumberlands Regiment is taken up at a Place call'd Chedabucto about thirty Leagues to the Eastward of this, which Place I believe he intends to make his residence.'' Incomplete.