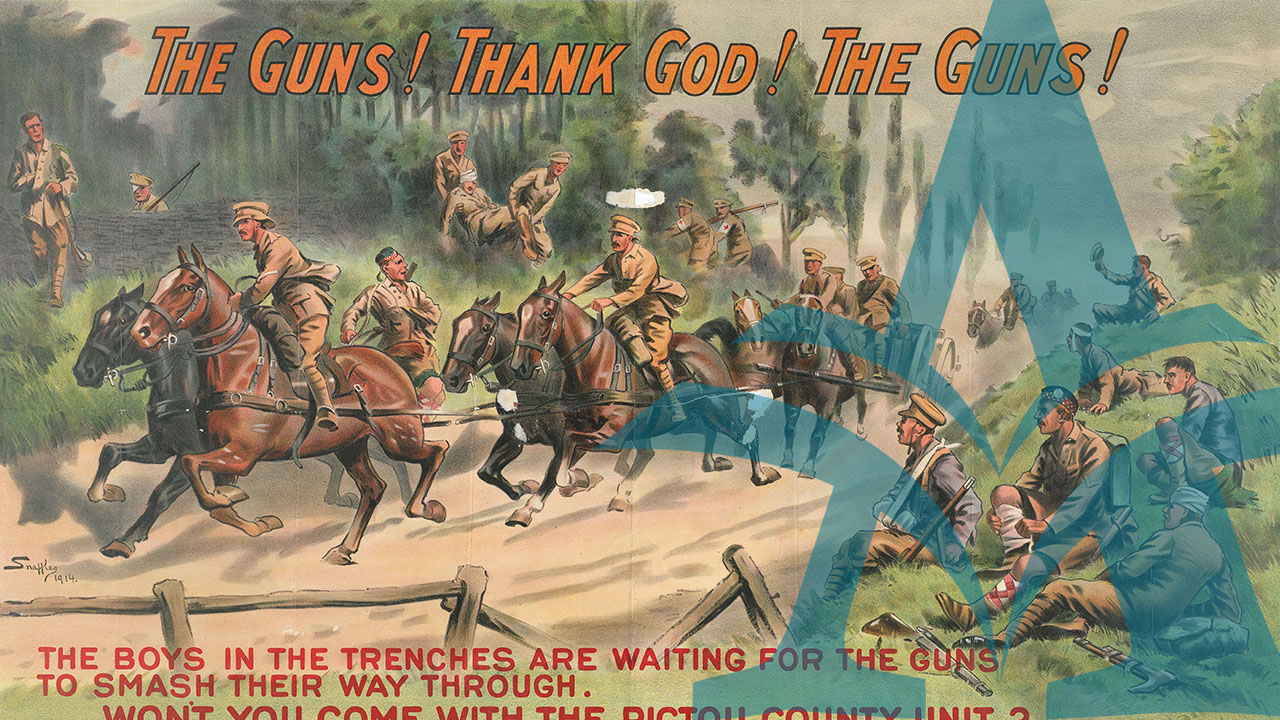 The Guns! Thank God! The Guns!

If ye break faith - we shall not sleep

The First World War began for Canada on 4 August 1914, the date when Great Britain officially declared war against Germany. No one knew then, nor could they imagine, either the duration of 'The Great War' or the battlefield horrors awaiting the 620,000 Canadian troops who went overseas during the four long years that lay ahead.

In a world predating radio, television and the Internet, large, brightly-coloured propaganda posters soon began appearing everywhere in the country — the highly visible manifestation of a government strategy designed to influence public thought and action. The posters were produced initially to encourage military enlistment, but their themes quickly expanded to include building public support for war industries, food production and the sale of war or 'Victory' savings bonds.

Although never intended as lasting testimonials to Canada's war effort, examples of these posters can be found today in many Canadian archives. Three such collections are held at the Nova Scotia Archives — a total of 90 different posters, digitized and presented here in approximate chronological order. A companion article by Dianne O'Neill, 'Your King and Country Need You': World War I Propaganda Posters, provides context and points to those of specific interest to Nova Scotians.

As O'Neill observes, "The passage of a century has made…. the Great War a foreign country, but the immediacy of the [posters] and the intensity of the feelings they still convey [makes them] passports into a by-gone era in a way that words alone cannot achieve."

We thank the Esther Clark Wright Archives, Acadia University, and the Randall House, Wolfville Historical Society, both in Wolfville, NS, for each sharing significant material with us for digitization – a magazine advertisement from the former, and a period photograph from the latter.

This is the first in a series of online exhibits to be developed by the Nova Scotia Archives over the next four years, to commemorate the province's contribution to and losses sustained in 'The War to End All Wars'.

They shall grow not old,
as we that are left grow old:
age shall not weary them
nor the years condemn.
At the going down of the sun
and in the morning
we will remember them.
~ Laurence Binyon, 1914