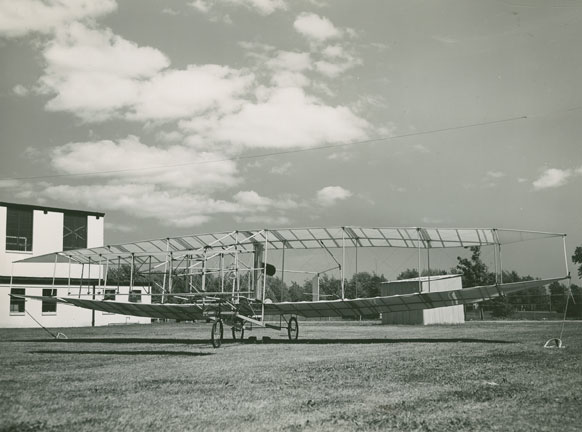 An unidentified newspaper clipping from February 1959 described the flight of the Silver Dart II: "Baddeck last Monday was a good place for an airman to be. No flier could help but be touched by the sight and sound of Mr. McCurdy, standing in the wind, muffled up in his large fur coat, telling those present of his experiences fifty years ago on the same piece of ice on which we stood." The clipping mentioned the gusts of wind which lifted little blizzards of snow and whirled them over the ice. The reporter then described the actual flight of the Silver Dart II: "The Wing Commander [Hartman] started his run on time to the minute of the flight fifty years previous. The plane rose in the air and was under perfect control when right in front of the crowd a violent gust met the aircraft and put it into a thirty degree, nose-up attitude. Hartman recovered and pulled out of the ensuing dive just clear of the ice. More gusts struck the aircraft and the Wing Commander overcame them for a moment or two before finally coming to a hard landing which would have been much worse had it not been for his superior flying skill. There was a breath-taking moment for the crowd and an audible sigh of relief went up as he stepped out unhurt. It was a memorable performance and a courageous one. Above all, it served to show the courage exhibited fifty years ago before when Mr. McCurdy flew the little machine down the ice with the benefit of no flying lessons or previous flights of any kind."