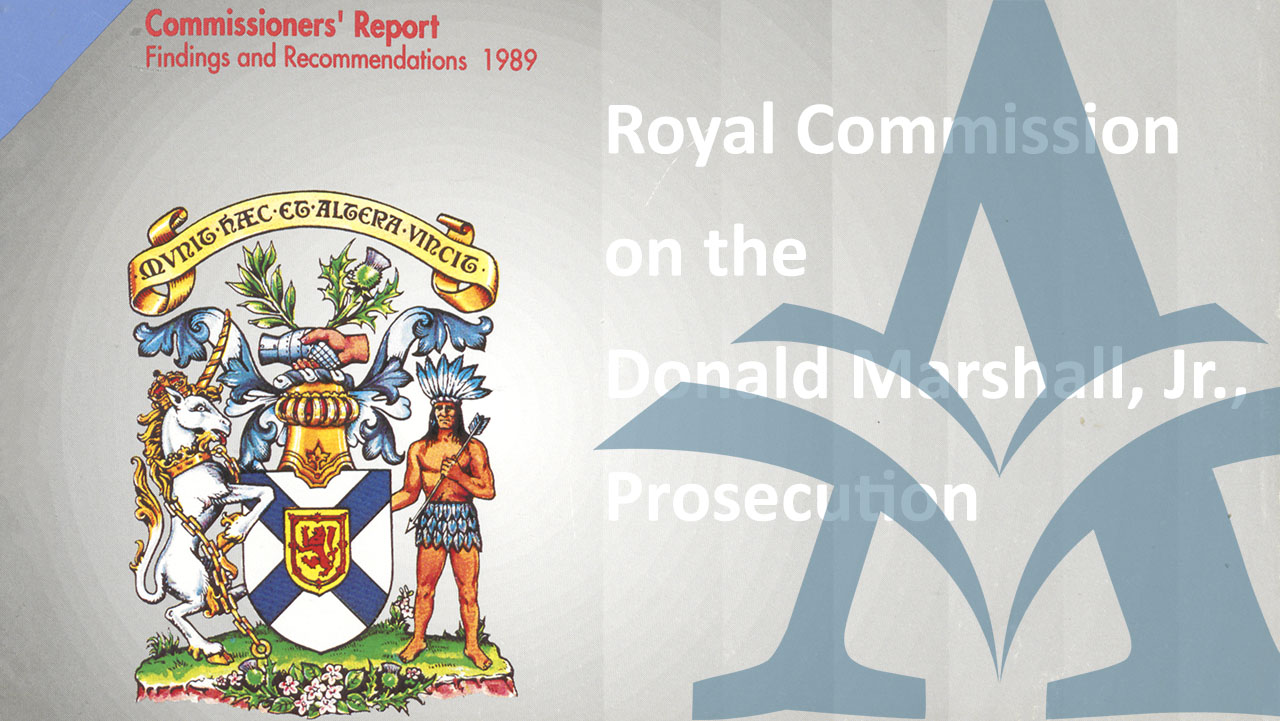 Donald Marshall Jr., a Mi'kmaq from Membertou, Nova Scotia, was wrongfully convicted of murdering Sandy Seale in Sydney's Wentworth Park in May 1971. Marshall was only 17 years old when he received a life sentence.

After 11 years and one month in custody, Donald Marshall Jr. was released on July 28, 1982. On considering evidence not heard in the 1971 trial, the Appeals Division of the Nova Scotia Supreme Court found that "no reasonable jury could, on that evidence, find Donald Marshall, Jr. guilty of the murder." While the Appeal Court acquitted Marshall it maintained that "any miscarriage of justice is, however, more apparent than real."

A Royal Commission was appointed on 28 October, 1986 to examine this case from initial investigation through to trial, reinvestigation and appeal. The Commission determined that, in order to prevent future wrongful convictions, it would be necessary to examine the state of the administration of justice in Nova Scotia, including "the role of the Attorney General as a member of Cabinet, and the relationship of crown prosecutors with defense counsel and with the police." In addition, the Commission set out to examine "the allegations that minorities of this province are not treated equitably by the justice system."

The records of the Commission are extensive and the Nova Scotia Archives has digitized all of them. On this website are the seven-volume report of findings and recommendations of the commission, transcripts of all proceedings and interviews, all exhibits, documents from the original trials and appeals of Donald Marshall Jr., counsel notebooks, and correspondence. Video of the public hearings, as well as the 1988 Consultative Conference, have also been fully digitized and included, along with audio recordings of Marshall Jr., testimony to the Commission — given in Mi’kmaq.

The amount of material is staggering, both in volume and content. 16,390 pages of transcribed testimony record the 89 days of hearings, the words of the 114 witnesses and the context of the 176 exhibits. The public hearings were captured on over 415 hours of video, and are now also available online (October 2020*). In addition to its report, the Commission published studies on public policing in Nova Scotia, the Mi’kmaq and criminal justice, discrimination against Black people, an examination of the Office of the Attorney General, prosecuting officers and the administration of criminal justice. Exhibits, witness testimony, and other records offer a window into a justice system unprepared and unwilling to accommodate the legal needs of First Nations and other cultural groups. This collection is vitally important, both for its vindication of wrongfully-convicted Marshall Jr., and for its role in shaping the Canadian and Nova Scotian justice systems we know today

* The Nova Scotia Archives gratefully acknowledges the generous support of the Nova Scotia Department of Justice and Treaty Education Nova Scotia for the digitization of the video content of this resource.