Highway Reconstruction in the 1930s

In 1934 the Department of Highways began a major infrastructure project to improve the Trunk Highway system throughout Nova Scotia. Paved highways would make it easier for motorists to travel and would encourage and accommodate increased traffic, particularly on tourist routes. More importantly for Depression-era Nova Scotians, the paving projects would provide much-needed employment opportunities across the Province.

“In time of prosperity construction and maintenance work on our highways are carried on entirely with a view on the needs of the travelling public. During the past several years, however, another factor has entered. With unemployment conditions as they are in Nova Scotia and throughout the world today highway work should be carried out so as to provide a maximum of employment. This was the policy followed by the Department in 1932.” Percy C. Black, Minister of Highways, March 1st, 1933, Published in the Department of Highways Annual Report, 1932, pp. 16-17

The Highway Reconstruction project, carried out from 1934 to 1938 and known as the Paving Programme, was largely experimental. The department first tried paving over the old gravel roadways, but quickly learned that preparatory work was required to stabilize the subgrade and provide underdrainage before laying the pavement. This preparatory stabilization was especially necessary during spring thaw:

...it is well to understand that a break in the gravel road when the frost is coming out of the ground causes very little inconvenience and loss, due to the fact that the repairs in this case are so inexpensive. This is not so with respect to hard surfaced roads where a frost break not only causes inconvenience, but a damage that is difficult and expensive to reconstruct or repair. Department of Highways Annual Report, 1935, p. 12

Paving the Trunk Highways was an expensive endeavour, costing more than $3,000,000 of the department’s Capital Expenditures annually. The right type of crushed gravel and rock (aggregate) used for pavement was expensive and difficult to find in some areas of the province. The department experimented with different types of hard-surfacing aggregate, depending on the types of gravel and rock available in specific areas where they were paving. In order to save costs on projects of significant length for which there were no low-cost bidders, the department also built its own paving plants and carried out its own paving.

The work was done in sections across a period of five years, to minimize the inconvenience of highway work to motorists. By 1938, all 804 miles of the Trunk Highway System were paved, and work had begun to pave the secondary County Roads.

“It is interesting to note that although there has been an increase in the mileage of those Highways classed as ‘Trunk’, since undertaking our paving programme in 1934 maintenance cost of our Trunk Highways has been reduced by almost 50%, while on the other hand, largely due to the savings made on the maintenance of Trunk Highways we have been able to more than double our expenditures on County Roads. Traffic on this class of Highway has greatly increased during recent years, not only a greater number of motor vehicles but also heavier loads and it is therefore essential to make greater Maintenance expenditures.” R.W. McColough, Deputy Minister of Department of Highways and Public Works, March 11, 1940. Department of Highways Annual Report, 1939, p. 7 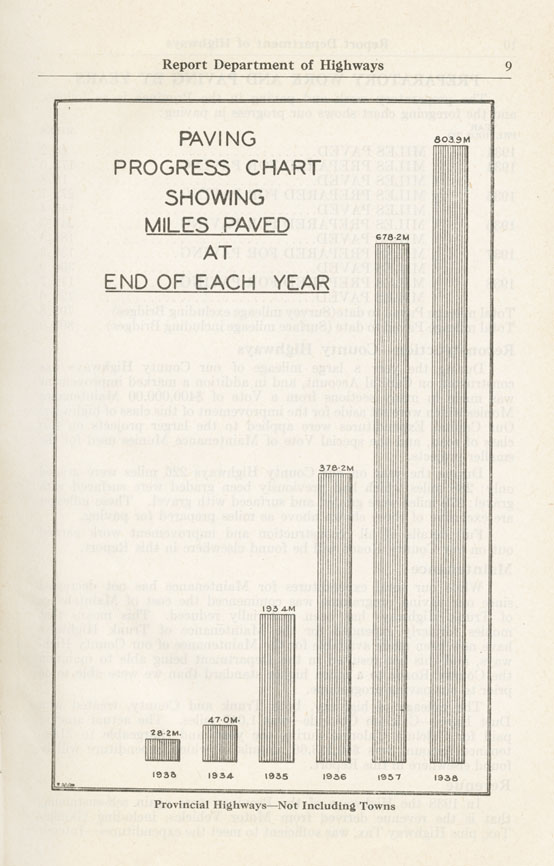