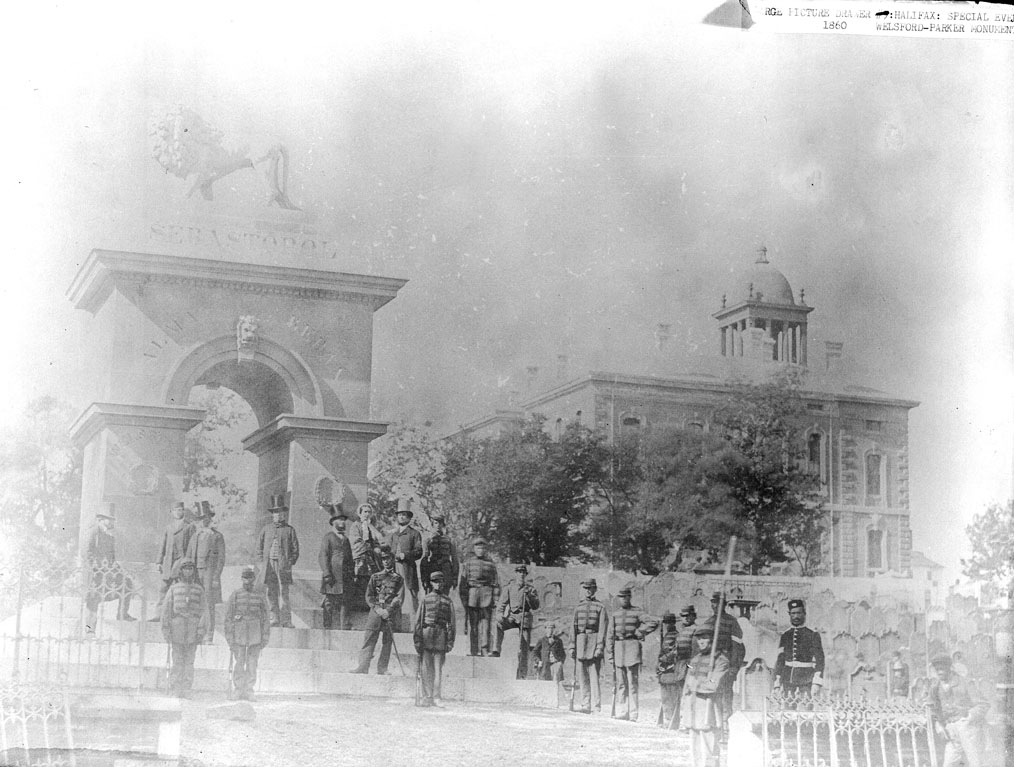 This well-known monument, located in Halifax's Old Burying Ground, was erected by citizens in memory of Captain William Parker and Major Augustus Welsford, Nova Scotians who died in the Crimean War. The Acadian Recorder for 21 July reported that:

The afternoon was clear, but uncomfortably warm. A little after 2 o'clock, the procession formed on the Grand Parade. It consisted of all the Halifax and Dartmouth Volunteer Companies, a large number of the Masonic body, and various public officials. These, paraded by bands of music, marched down Barrington Street to the old Cemetery, where detachments of the Regular troops of the garrison were already stationed. The military portion of the assemblage formed a hollow square around the Monument, within which ticket holders were admitted. A large assemblage, especially of the fair sex, were present to witness the proceedings; and the gloomy old grave yard for once presented a gay appearance. The ceremonies commenced with prayer by the Rev. John Scott. His Excellency the Lieutenant Governor, Lord Mulgrave then addressed the assemblage at some length and, in concluding, introduced the Rev. George Hill, the Orator of the day. Mr. Hill's oration was an able and eloquent effort, and is, we understand, to be printed. Major General Charles Trollope also spoke in his usual popular and humorous style, and Rear Admiral Sir Alexander Milne made a few remarks. A great deal of cheering was done and the proceedings concluded by the Volunteer Artillery under the command of Captain Tremain, firing13 minute guns, and by the bands playing and the whole assemblage singing the National Anthem. We find that while the ceremonies were going on, Chase, the clever photographer succeeded in taking an excellent photographic view of the whole scene, a copy of which we have no doubt many people will hasten to secure, as a memento of the day and the event.

The reporter for the Acadian Recorder was obviously fascinated by the photographer's activities. Outdoor photography was still a novelty, and this is one of the very first surviving examples taken in Halifax. In the background of the photograph is the Court House, designed by William Thomas of Toronto – brand new then and still standing today.