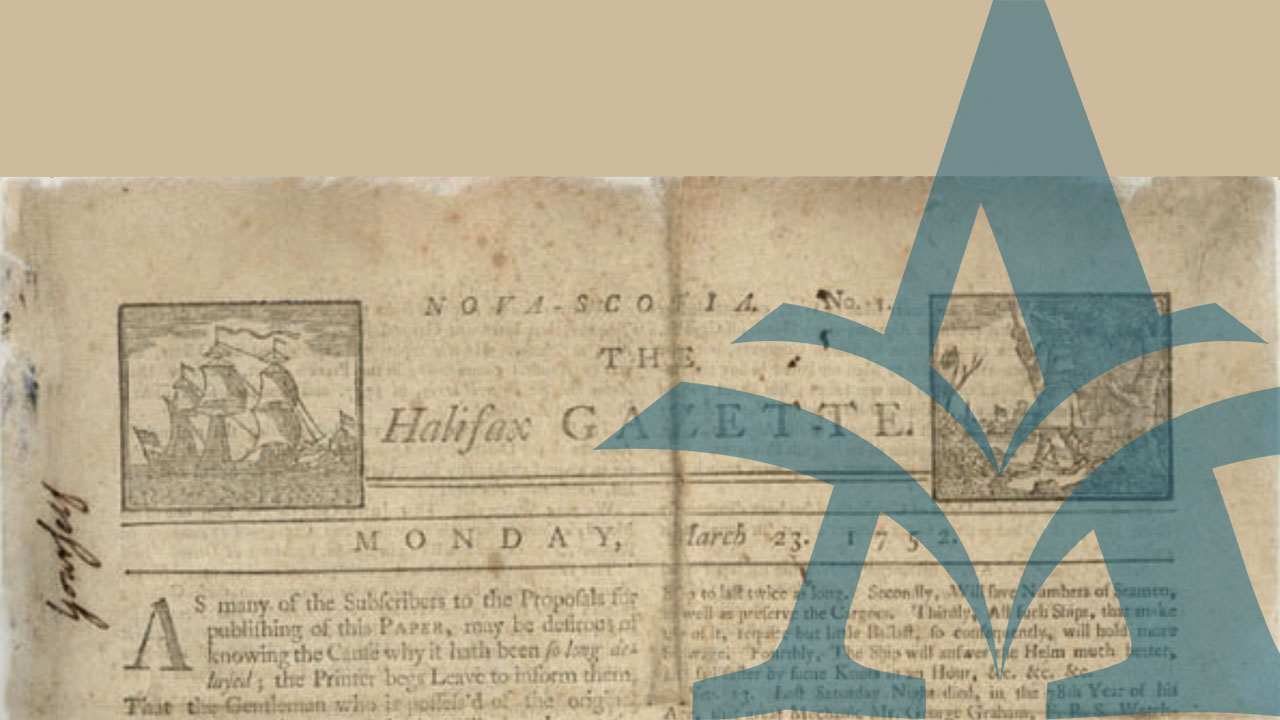 On 23 March 1752, the history of printing began in Canada. On that Monday, from a small print shop on Grafton Street in Halifax, Nova Scotia, John Bushell sold copies of the Halifax Gazette — Canada's first newspaper.

Printed on just half of a single foolscap sheet, the two-page tabloid featured news from Britain, Europe, New England and the other British colonies to the south — items that would be of interest to local government officials, military personnel and business leaders. Although Halifax was the provincial capital, it had been settled only three years' previously and had less than 4000 inhabitants — accordingly, community news did not require much space in the paper's two columns of text. Indeed, the only local content came from advertisements and notices for Halifax businesses: Leigh and Wragg advertised their school at the 'Sign of the Hand and Pen' on Granville Street; Proctor and Scutt sold butter by the firkin at their store near the North Gate; and legal documents were drawn up at the corner of Sackville Street from 9 a.m. to 12 noon and from 3 p.m. to 7 p.m., six days a week.

Although the first issue contained news of the death of John Goreham [Gorham], a local official, military officer and businessman who had recently died in London 'of the Small Pox', it would not be until 1769 that the paper began to regularly report local marriages, deaths and the occasional birth.

John Bushell's status as Canada's first printer was accidental. His former partner, Bartholomew Green, appears to have been in Halifax as early as July 1751, intending to publish a newspaper. Green's press, however, was delayed until 14 October, when the sloop St. John arrived from Boston, bringing the press, 45 barrels of rum and a box of chocolates. Green had just enough time to publish a prospectus for the proposed newspaper before his untimely death on 29 October, aged 52.

Bushell and Green had been partners in a print shop in Boston, and it is said that upon hearing the news of Green's death, Bushell immediately decided to proceed to Halifax and establish himself as the young colony's first printer — using the press that had arrived there just two weeks and a day before his friend's death. Bushell's family joined him in Halifax, and his daughter Elizabeth was known to have worked in the printing office as a compositor and presswoman.

Of all the copies printed by John Bushell on 23 March 1752, only one remains. On June 20, 2002, Library and Archives Canada announced the acquisition of the first issue of the Halifax Gazette from the Massachusetts Historical Society in Boston. Library and Archives Canada in Ottawa now counts that piece of paper — which is the start of Canadian print culture — as part of their collection. Microform and 20th century newsprint facsimile copies of the original issue, however, are widely available.

View other sources of information in the Nova Scotia Archives library and other websites of interest.