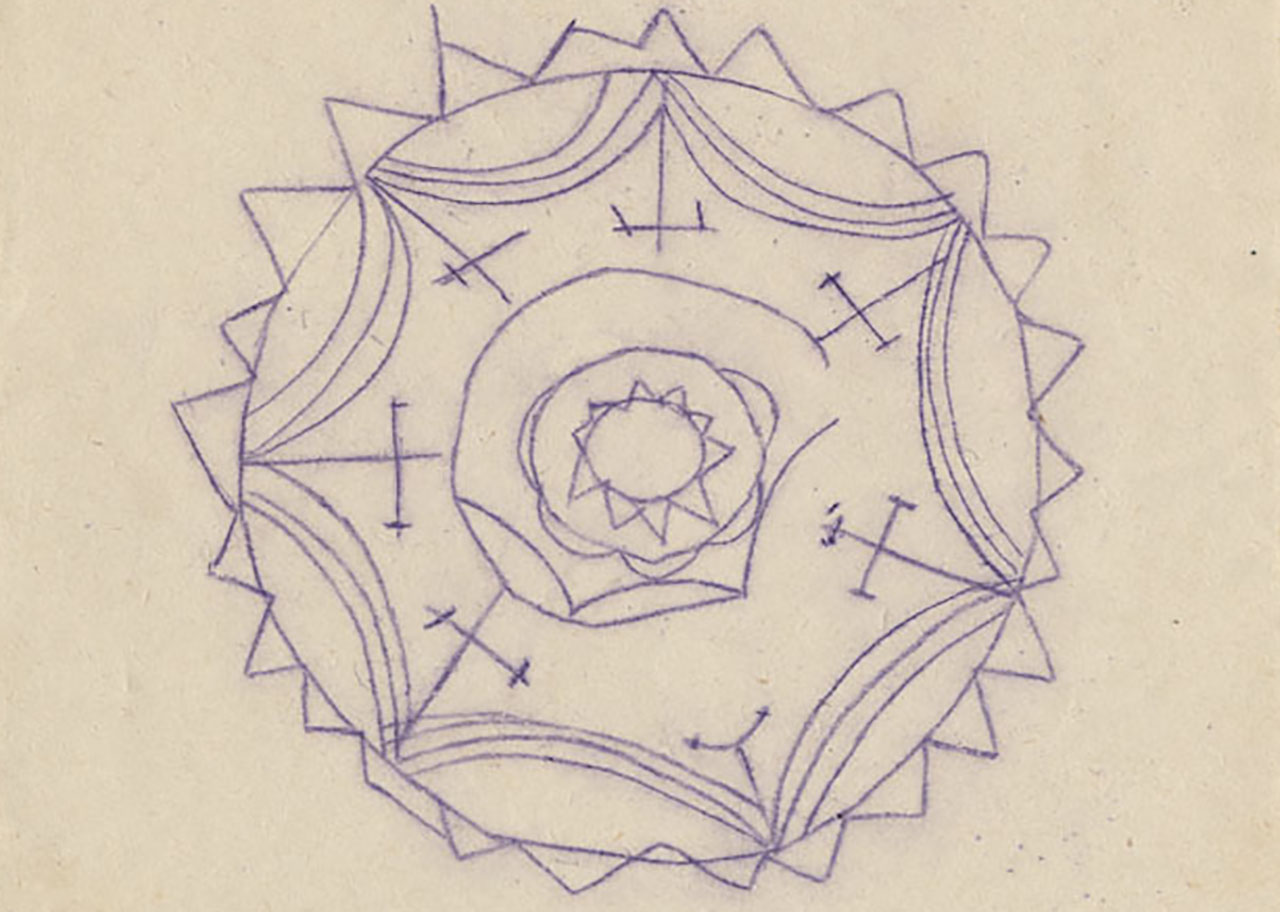 Tracing of a petroglyph of the insignia worn by Mi'kmaq chiefs

Tracing of a petroglyph of two human figures in ceremonial clothing

Tracing of a petroglyph of a caribou

George Creed was the postmaster in the small community of South Rawdon in central Nova Scotia. His father, also George Creed, was Clerk of Works with the Royal Engineers in Halifax, and had retired to the Rawdon area in the early 1860s. Upon his death in 1877 the younger George inherited much of his father's extensive and eclectic library. When he noticed in James More's History of Queens County a mention of "Indian representations of animals, birds, etc." a lifelong interest in the petroglyphs began.

He first visited the Fairy Lake site, now within Kejumkujik Park, in 1881 and through his research he became aware of the work of Col. Mallery of the American Bureau of Ethnology of the Smithsonian Institution. He returned with Mallery in the summer of 1887 and continued working on collecting, classifying and tracing the drawings at Kejumkujik (Fairy Lake) and McGowan Lake. Over time Creed found over 2000 images at Fairy Lake and copied several hundred of them.

His concern over their fragility as shallow carvings into soft rock that was easily erroded by rain or ice led him to write to the Provincial Secretary in 1888 offering some copies for their protection. Although these records found their way to the Nova Scotia Museum in 1910, Creed retained most of the copies he had made. Apart from a presentation on his findings to the Nova Scotia Historical Society in 1888 Creed seems to have not spoken or written further about his collection.

In 1948 Creed's grand-daughter, Mrs Hedley Lawson, presented his tracings, which had been maintained by the family in his South Rawdon home, to the Nova Scotia Archives.

These rock pictures, or petroglyphs, record the lives of the Mi'kmaq and the things they saw around them, including people, animals, daily activities such as hunting and fishing, and traditional clothing of the time. Creed's tracings, contained in this virtual exhibit, form the earliest attempt to systematically document the petroglyphs in the province and are an important record of Mi'kmaq life. Constantly exposed to weather and sometimes vandalism, many petroglyphs have become worn or been defaced, while others have disappeared from view, under water due to changing shorelines. In some cases, Creed's tracings are now the only surviving record of these images.