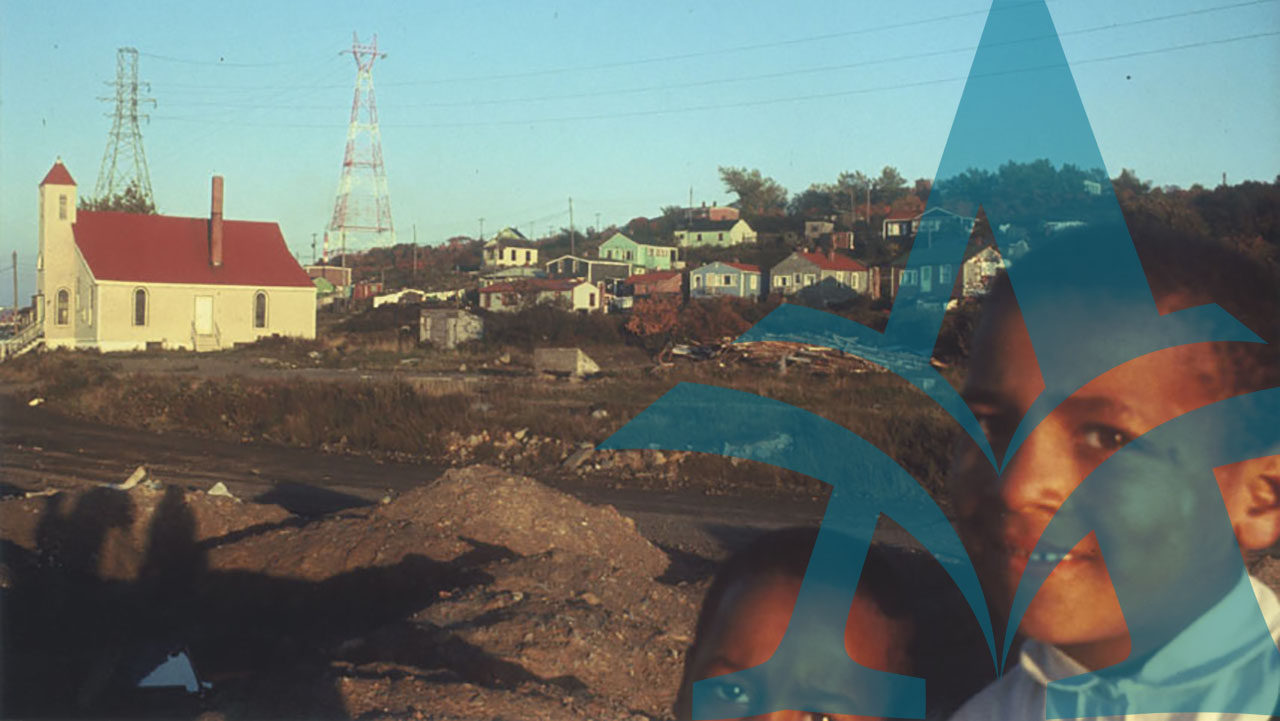 Two Africville children, with Seaview African United Baptist Church and houses behind it in the distance

Bob Brooks' Photographic Portrait of Africville in the 1960s

Photojournalist Bob Brooks was born in 1927 at Watertown, Connecticut and moved to Yarmouth, Nova Scotia, in September 1949. In 1957 he began a 35-year career as a professional photographer. His work appeared in Time Life, The Star Weekly, Sports Illustrated, Newsweek, McCall's, Harper's, Maclean's, Chatelaine, The London Times, Paris Match and National Geographic. Brooks was one of the original photographers who joined Image Bank International of New York in 1974. He died in September 1999 and is buried in Yarmouth.

Africville was settled in about the 1840s by people from the Black Refugee communities of Hammonds Plains and Preston. William Brown Sr and William Arnold purchased the land in 1848; the first church congregation (later Seaview African United Baptist) was established in 1849; and an elementary school was opened in 1883. Although geographically a part of the City of Halifax, Africville was always a separate community, with a largely African-Nova Scotian population. Africville struggled for survival throughout its 125-year history. It was divided by railway tracks and encroached upon by factories, sewage disposal pits, slaughter houses, and other non-residential development. The elementary school was closed in 1953 and the children were relocated to racially-integrated schools elsewhere in Halifax. In the mid-1950s, Halifax moved its large open civic dump to within one-half mile of Africville. The City considered Africville to be a suitable site for eventual industrial development, and did not extend water, sewer, police, and other municipal services to the community.

In October 1962, the City decided to eliminate Africville and relocate its residents elsewhere in Halifax. The relocation was part of a broader program of "urban renewal" in Halifax, as in other North American cities, in the 1960s. The process of relocating Africville residents began in 1964; the demolition of the community was largely completed by the end of 1967. In early January 1970 the City bulldozed the building of the last Africville resident, who reluctantly agreed to sell his property to avoid expropriation. The land on which Africville stood is now part of Seaview Memorial Park, named in memory of Seaview African United Baptist Church. Africville was designated a national historic site in 1996 and a plaque was placed at the site in 2002.

Bob Brooks created his photographic record of Africville, mostly in black and white, between about 1962 and 1965. Brooks took numerous photographs of the public meeting at Seaview African United Baptist Church on 23 August 1962, held in response to the previous month's report by the Halifax City development department recommending the elimination of Africville. His remaining photographs of Africville are undated, but many appear to have been taken about 1965, and show the community just prior to relocation.

Some of Brooks' photos appeared in articles on Africville in The Star Weekly and Maclean's in the 1960s. His photos have been featured in every major published work on the subject, most notably Africville: The Life and Death of a Canadian Community (Clairmont and Magill, 3rd edition, Canadian Scholars' Press, 1999) and The Spirit of Africville (Africville Genealogy Society, 1992); as well as a major exhibition, Africville: A Spirit That Lives On (Mount Saint Vincent Art Gallery, 1989); and a National Film Board documentary, Remember Africville (1991).

Bob Brooks' photographic portrait of Africville is remarkably comprehensive. He shows us the glorious location of Africville on the shores of Bedford Basin; Seaview African United Baptist Church from all angles, including colour views, some with Africville children in the foreground and others taken from the Halifax city dump; several wells, each with a sign that reads, "Please boil this water before cooking and drinking;" distant and close-up views of houses, ranging from those in poor repair to well-kept bungalows, perched on hilly, unpaved lanes; walkers on the railway tracks; and a Canadian National Railway train, as well as an Acadian Lines bus, passing through.

Brooks' sharp photographic eye captures scenes and details that reflect the life of the community. We see a mother admonishing a group of children who are climbing a steep lane from the railway tracks; a family dog enjoying the freedom of his backyard; young men playing horseshoes; two girls passing by, one of them turning to flash an impish smile at the photographer; bicyclists by the railway tracks, apparently pausing to admire the view; and blueberry pickers on the hill above Africville. Many of Brooks' shots of houses show a full line of laundry, laboriously washed by hand with water carried from one of Africville's wells, flapping in the breeze. Brooks also shows us intimate interior views, with families in their living rooms or having a discussion around the dining room table. And, finally, we see the smiling face of a young boy, with a house boarded up during the early stages of relocation behind him.