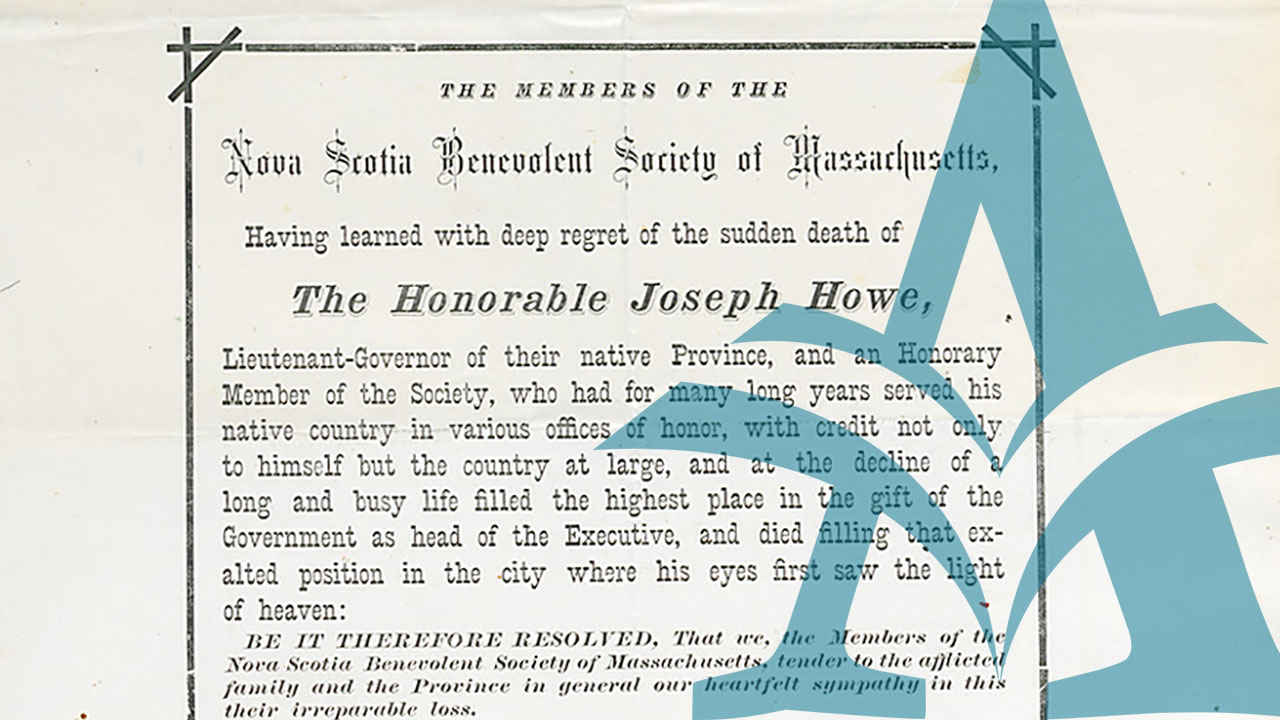 Joseph Howe and His World

Joseph Howe (1804-1873), journalist, politician and public servant — is one of the province's greatest 19th century figures, and a man whose long and distinguished career ensured that he became — and remains — a Nova Scotia legend.

Much has been written in the years since his death about Howe as a journalist and publisher, a politician and statesman, and a poet and writer in Nova Scotia's mid-19th century intellectual and political awakening. Howe the private man remains somewhat more elusive, however; for example, little use has yet been made of archival material to explore the world in which he lived, and to position him directly within that world. We are pleased to present here a unique and unusual tool to encourage that kind of exploration — namely, Sydenham Howe's family scrapbook.

Sydenham Howe (1843-1929) was a lover of history, a devotee of his father's career, and the 'keeper of the family flame.' One of his ways to ensure the survival of personal and family memorabilia in the days before popular photography and digital preservation, was to keep a large, scrapbook.

Into Sydenham Howe's scrapbook went everything — letters, poetry, newspaper clippings, genealogical notations, autographs, medals, ribbons, art work, invitations, calling cards, printed programs for public events — even a piece of his wife's wedding dress — all in no order whatever, either chronologic or thematic, and completely lacking an index. In other words, an archivist's nightmare.

The contents of the scrapbook appear to cover the years 1744-1917, but predominantly 1853-1889, thus spanning the public lives and leisure interests of both father and son. Every page of the scrapbook is a surprise, and here are a few, lifted directly from the archival description:

….correspondence, predominantly written to and from Hon. Joseph Howe; printed and handwritten poems by Joseph Howe, Maria Morris, Mary Jane Katzman Lawson, Griselda Tonge and others; prints of engravings and lithographs, many of which depict women's fashions of the mid-19th century; newspaper clippings, several pertaining to poetry and curling; sketches and watercolours by artist Maria Morris as well as Mary Currie and S.J. Howe; visiting cards; autographs dated 1757 onwards; printed material and ephemera, including invitations, the Victoria School of Art and Design exhibition of art loans catalogue, 1887, and 1889 issue of Halifax Carnival, and three Notman photographs of John Howe and John and Mary (Currie) Ross. Also contains correspondence and other items relating to the McNab family.

We invite you now to step back in time, to explore Joseph Howe and the world in which he lived, captured in the pages of his son's very Victorian scrapbook.