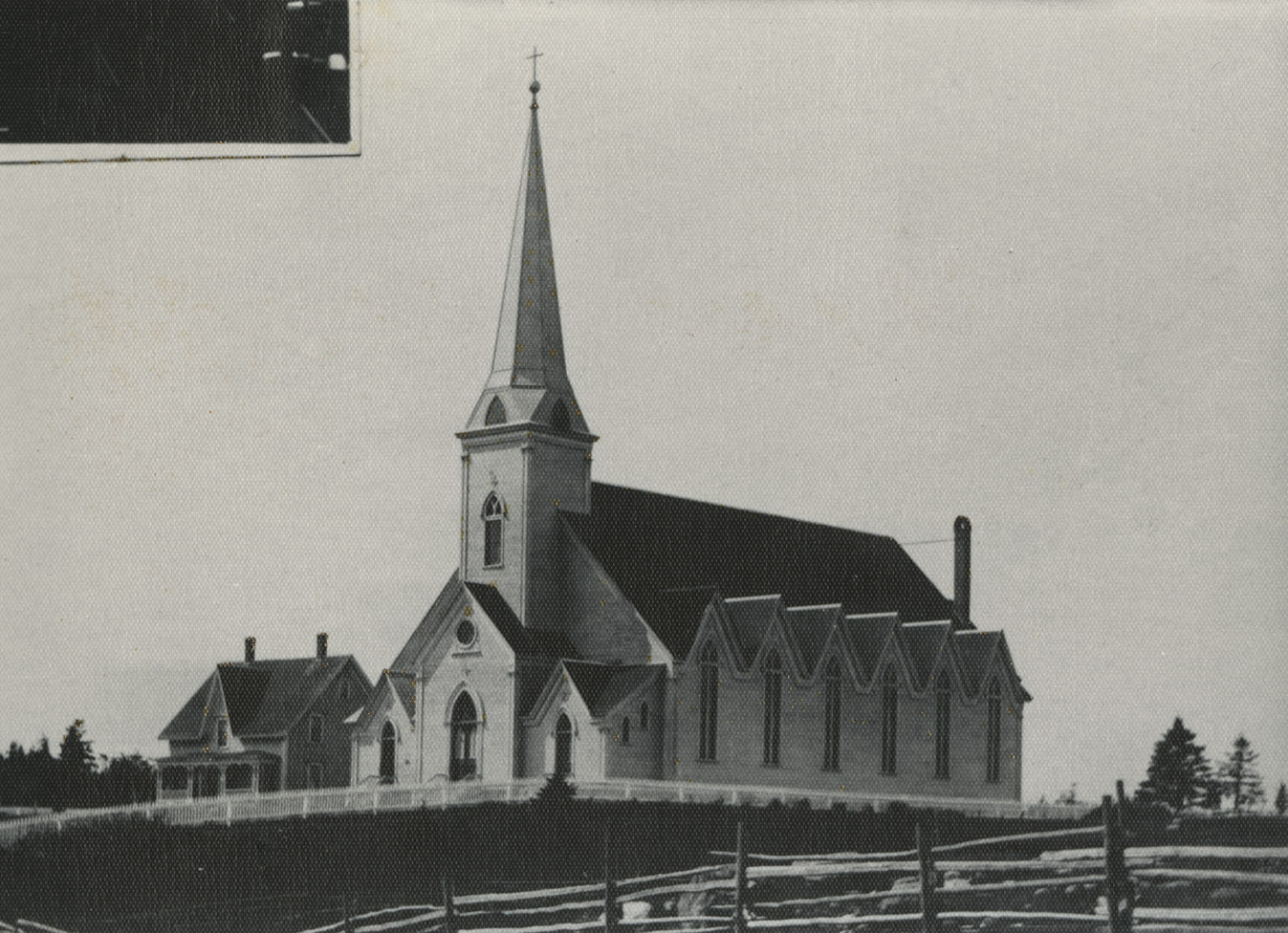 The present Catholic church in West Pubnico is the third which has been built in the village. The first one stood north of what is known as the Old Church Road, on top of the hill, at 75 feet from the road. It measured 25 feet by 37, without the sacristy. It could accommodate 200 people. It was erected at the time of Father Sigogne, who blessed the cornerstone in 1810 and the church itself in 1815. When it was abandoned in 1840, it was occupied as a home by Joseph Levi d'Entremont, son of Paul (who formerly owned the land). It finally was moved nearby the home of Alfred N. d'Entremont, son of Nicolas, to serve as a workshop. Its last owner was Bernard L. d'Entremont, who had it demolished in the month of March of this year.

The second church was built in 1840 just across the road from the first church, in what is known now as the Old Cemetery. It measured 40 feet by 50, with a steeple 77 feet high from the ground. It was demolished from the month of October 1902 into the following year. The material was used to build the East Pubnico rectory.

Father Jeremiah J. Sullivan took over in June of 1887, and already in October he purchased four acres of land from my grandfather Nicolas d'Entremont, for the sum of $160.00 on which the new church was to be built. The architect Joseph B. Kinney, of Yarmouth, presented in April of the following year, the plans for the new church. We read that "The building is to be 96 feet long by 60 feet. A Sanctuary in the rear 30x20 feet. A Sacristy 19x14 feet. A Vestibule in front 55 feet and a porch 21x2 feet projection in front of Vestibule, with a Tower 58 feet high, by 14 feet square, and a spire 58 feet high, surmounted by a final eight feet above, total height from the sills 118 feet." It was to accommodate 800 persons.

The church was to be heated by three big baseburners, two of which were to be placed at the entrance-doors and one in front of the altar. There were to be two brick chimneys, with an opening of 12 by 16 inches. A picture taken just after the church was built shows long stove pipes running from those stoves towards the chimneys.

The plan was signed on April 24, 1888. Already, at this date, the cellar had been dug and the foundation had been laid, which consisted of granite stones which came from Comeau's Hill.

A young man, not yet 30 years of age, was to head the construction. He was Louis Philippe LeBlanc of West Pubnico, son of Pierre, called Pierrotte. The carpenters who had been hired, most of them older than himself and surely having more years of experience, told him that it was practically impossible to erect such a building with the means at their disposal.

There were 10 carpenters, eight from West Pubnico.

Started in 1890, the construction wouldn't be completed before 1892. At Christmas, 1891, the work was enough advanced for the midnight Mass to be held in the new church, it being the first Mass; people had to use benches, as the pews had not yet been installed. It was in the summer of 1891 that the rectory was moved to its present location (See sketch No. 29).

This church was at the time one of the most beautiful and largest in Southwestern Nova Scotia. Its steeple was the tallest of any other church in the region.

I do not know how much it cost to build it. Before the construction, Father Sullivan was already gathering money to pay for it. For example, in 1888, he organized a "Grand Bazaar" along with a lottery to pay for the erection of the church. There were over a dozen prizes to be given for the lottery, the most valuable one being a "Grand Organ, worth $150.00," that which today would amount to over $3000. Father Louis Ducheneau, who arrived in 1895, organized the following year a "chain letter." The one receiving this letter had to send to the pastor 10c and to friends three copies of it, asking them to do likewise on their part and to give to their letter a number next in line to the one of the letter they were receiving. The chain was to last up to the 100th number. If all had gone as designed, at the 100th letter the plan would have yielded billions and billions of dollars. In fact, a small calculation will reveal that at the 10th letter, if everybody had followed the process, the sum gathered in 10c would have been close to a million dollars; that would have meant that close to 10 million people would have been contacted, that is about 20 times the population of Canada at the time.

Many changes have been taking place since then, the most significant one being the extension in the rear of the church in 1928, at the time of Father Denis Comeau, which was to serve at the time as a chapel.

Part of article by Father Clarence d'Entremont, published in the Yarmouth Vanguard.