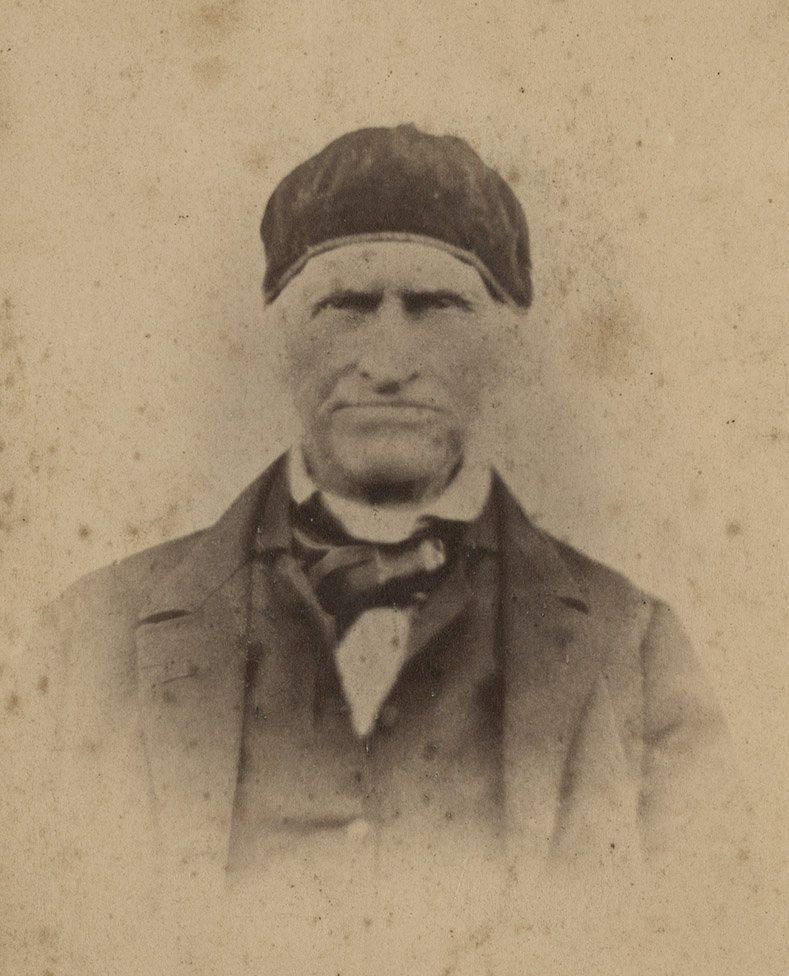 Simon d’Entremont was born in West Pubnico on November 28, 1788. His mother was Anne Marguerite Pothier from Wedgeport. Having received a large track of land in East Pubnico from his father, this is where he settled, his house being, at the time, one of the first to be built at the beginning of the French part of the village in Upper East Pubnico.

Having received but a scanty formal education, he studied independently, and could speak and read French, English, Latin, and Micmac; he could recite "Our Father" in these four languages. After becoming a Justice of the Peace in 1838, he was always known among the French people as "Simon Square," erroneously for "Squire" (Simon pronounced in French).

He was to be very active in the civic affairs of Yarmouth County just like his father. In 1836, what is now Yarmouth County was separate from Shelburne County and the District of Argyle was granted the right to elect its own representative at the Legislature in Halifax. Simon decided to run as a candidate against Thomas Willett of Argyle. He won by a margin of 63 votes, which was enough at the time not to require a recount. At that same provincial election, another Acadian was elected, namely Frederic Robichaud, for Annapolis County, both being the first Acadians ever to be elected in Canada to any Parliament. However, when the house convened in Halifax, Robichaud was ill. That is why Simon d’Entremont is considered to have been the first Acadian to have ever taken his seat in a legislature, which took place on January 31 of the following year. Robichaud took his seat over three weeks later, February 25.

When Simon d’Entremont was asked to take the "Big Oath" before taking his seat, which had been published in 1788, during the reign of King George II, he looked at it and when he saw that he would have to swear that he did not believe in the Holy Sacrifice of the Mass and that the veneration of Saints was pure superstition, he handed back the document, saying: "I would rather swallow a dogfish tail first than swear to that." A dogfish, as you may know, would be impossible to swallow on account of its sharp, hard fins pointed towards the tail. When he was summoned in the name of the law to take the oath, little did the officer realize that his newcomer M.L.A. knew more about the law, probably, and then he did himself. In fact, he knew that the oath had been abolished eight years before by the British Parliament, even though members were still urged to take it. The matter was brought to the attention of the Lieutenant Governor, who authorized that from then on, the only oath to be taken would be to be faithful to the laws of the land.

After taking this watered-down oath, Simon d’Entremont took his seat in the midst of the applauds of his colleagues, who had admired his courage and to the great satisfaction of the whole province for which he had won a great victory. Although, he represented his district for only one term, it was enough for him to be considered for the rest of his life as a symbol of religious liberty.

He died in East Pubnico on September 6, 1886, in his 98th year. Father MacLeod recorded his funeral in the church registers with these words: "Interned Sept. 10. 1886, Simon d’Entremont with all the rites of the Church he served so well. He was the first Roman Catholic member sent to the Provincial House of Assembly. He absolutely refused to take the oath against his Holy Religion. His friend, the Hon. Joseph Howe, dispensed him from taking it. Mr. Howe, the last time he visited the County of Yarmouth, paid him a visit, and passed a night at his home. - W. MacLeod".

His remains rest in the Catholic cemetery of the Immaculate Conception Church in East Pubnico. In 1967, the French people of the area, to mark the 200th Anniversary of the founding of their village and the centennial of the Confederation, erected a magnificent stone on his tomb with the following inscription in French, which I translate: "SIMON D’ENTREMONT – 1788–1886. 1836: First MLA elected to the Nova Scotia Legislature by the Township of Argyle–1837: First Acadian to sit in the House–Refused to take the heretical Oath of Allegiance–’I would rather swallow a dogfish tail first."

Part of an article by Father Clarence d’Entremont, published in the Yarmouth Vanguard, Tuesday, June 26, 1990