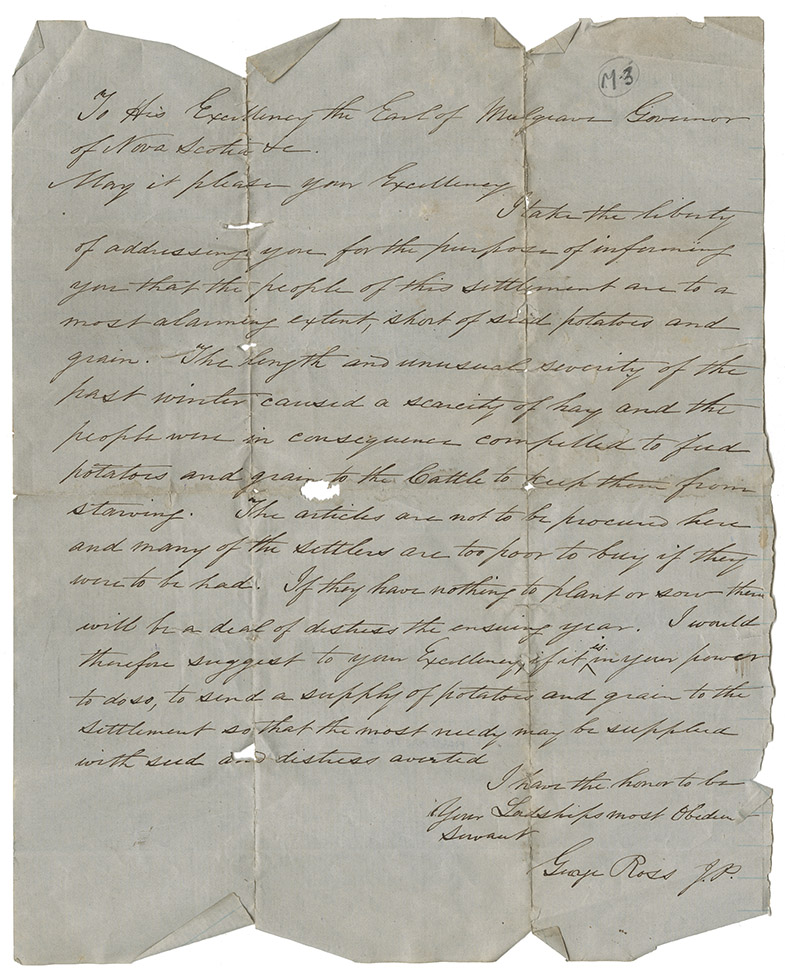 Letter from George Ross to the Earl of Mulgrave, Governor of Nova Scotia

Note: Item discusses the concern Ross has over the shortage of seed potatoes and grain. This situation was a result of several harsh winters that left the people with a shortage of hay, forcing them to feed the potatoes to the cattle. Request the governor to send a supply of grain and potatoes to the most needy of the inhabitants. 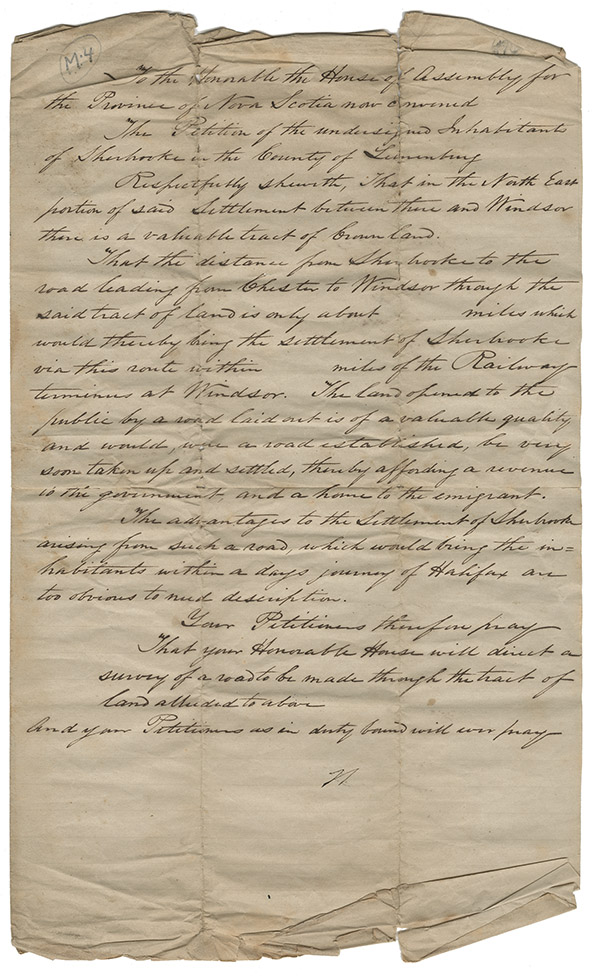 Note: Item discusses the valuable piece of Crown Land that is located between the settlement of Sherbrooke and Windsor. If this land were used for a road it would provide the Crown with revenue from those who settled near it and provide the inhabitants of Sherbrooke with a road leading to the railway would bring the inhabitants of Sherbrooke within a day's travel to Halifax. There hope is that the Crown would send a surveyor to the area to inspect the land's potential of creating a new road. 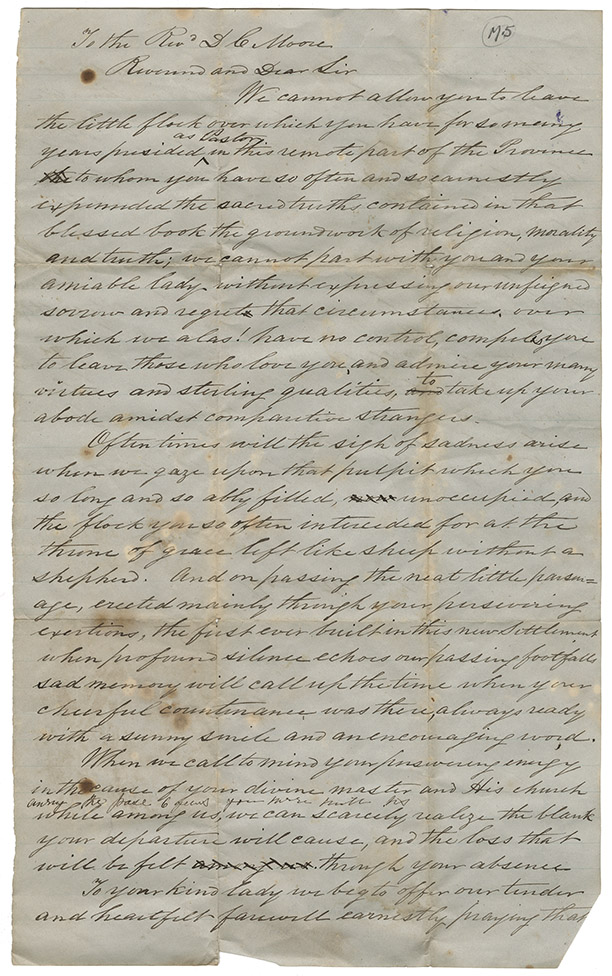 Letter from the Inhabitants of Sherbrooke to the Reverend Moore

Note: Item discusses the regret of the community of the Reverend Moore and his "amiable" wife leaving the community. Describes Moore as having brought "religion, morality and truth" to "this remote part of the province"; the letter goes on to describe how upset they are for him leaving but understand the reasons why he must go. 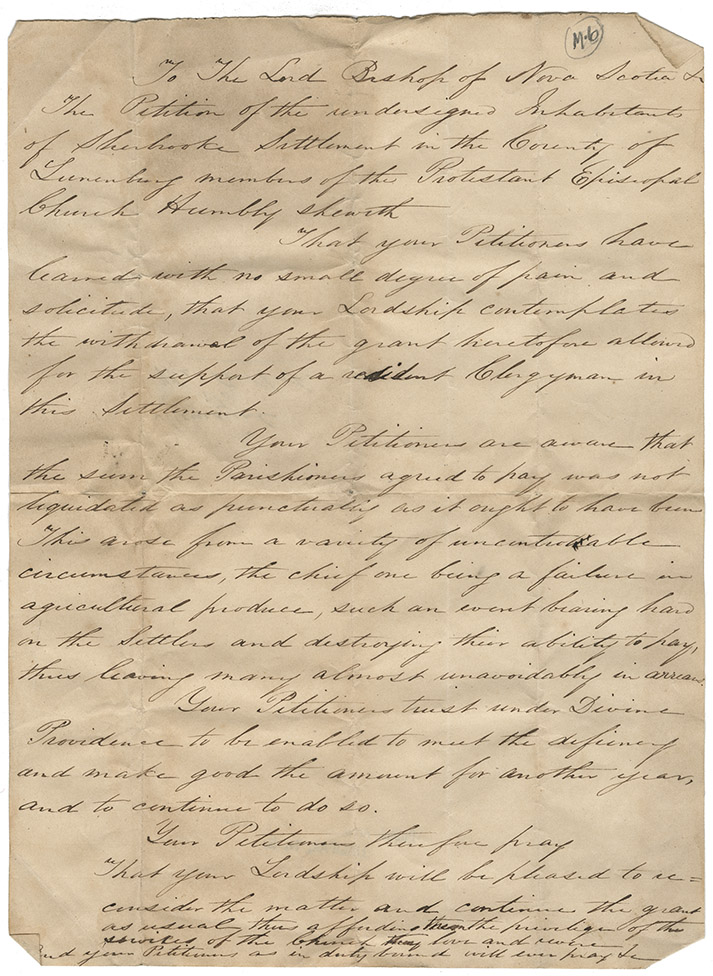 Note: Item discusses how the Lord Bishop's withdrawal of the grant to support a clergyman has left the community in great need and pain; petitions the Lord Bishop to reconsider this withdrawal and apologizes for the delay in the parishioners paying half of the sum that was required. 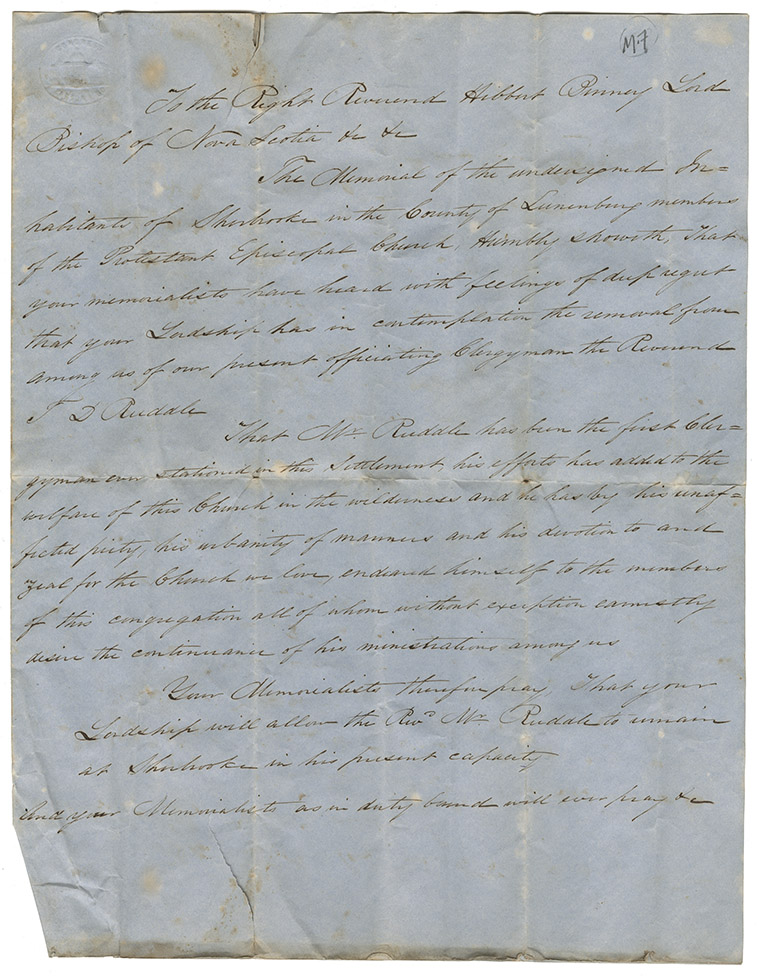 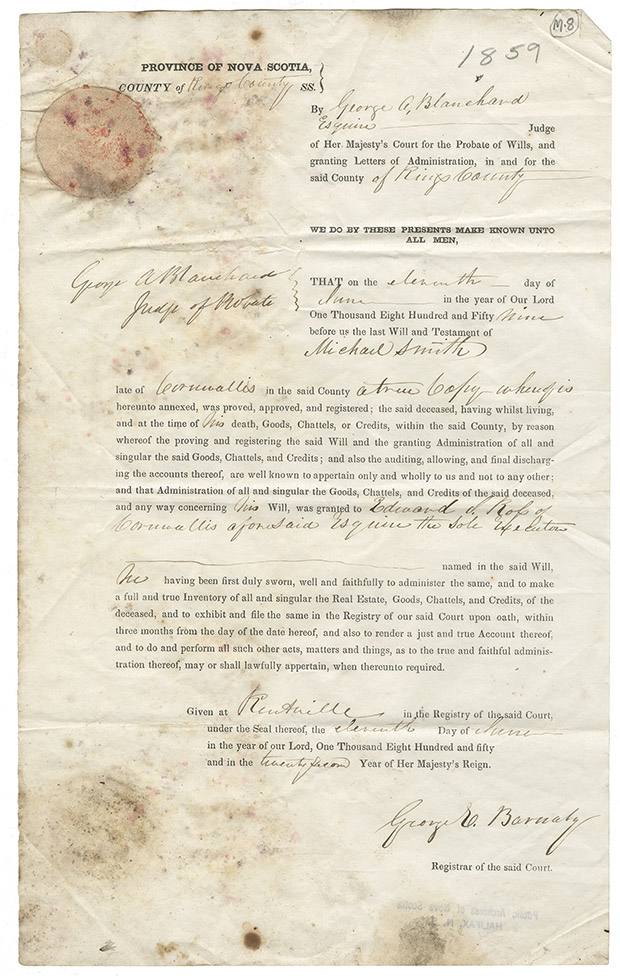 Will for Michael Smith of Cornwallis

Note: Item discusses the last will and testament of Michael Smith, who appointed Edward Ross ESQ., of Cornwallis to be executor of the will. The document lists the names of his sons and daughters who are to settle his debts and the costs of his funeral. Note: it appears that the two pages had been formally affixed. 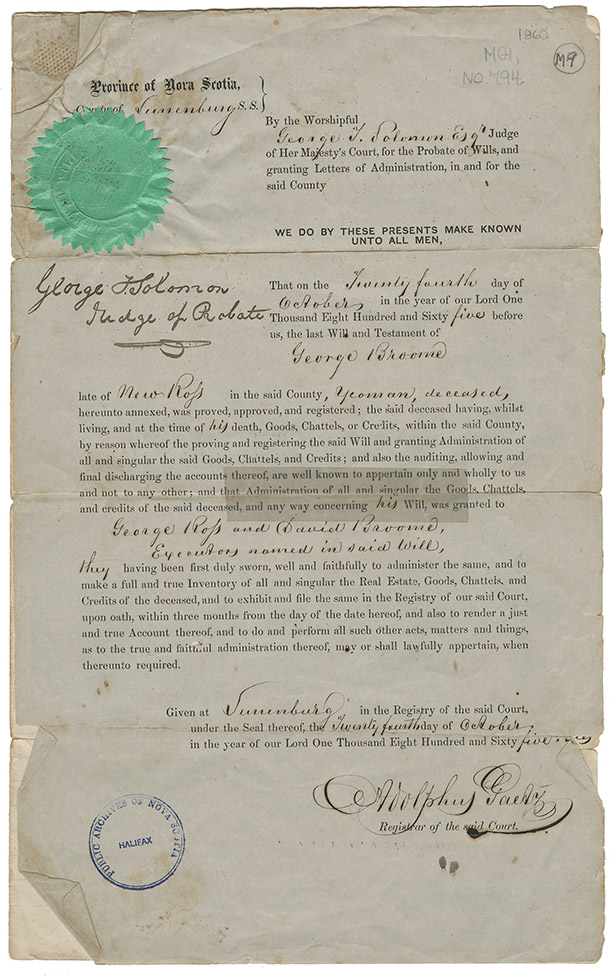 Note: Item describes George Ross and David Broome being appointed as executors; also includes a copy of the will listing family members. Note: On hardcopy is listed as being number 65, but actually is M9. 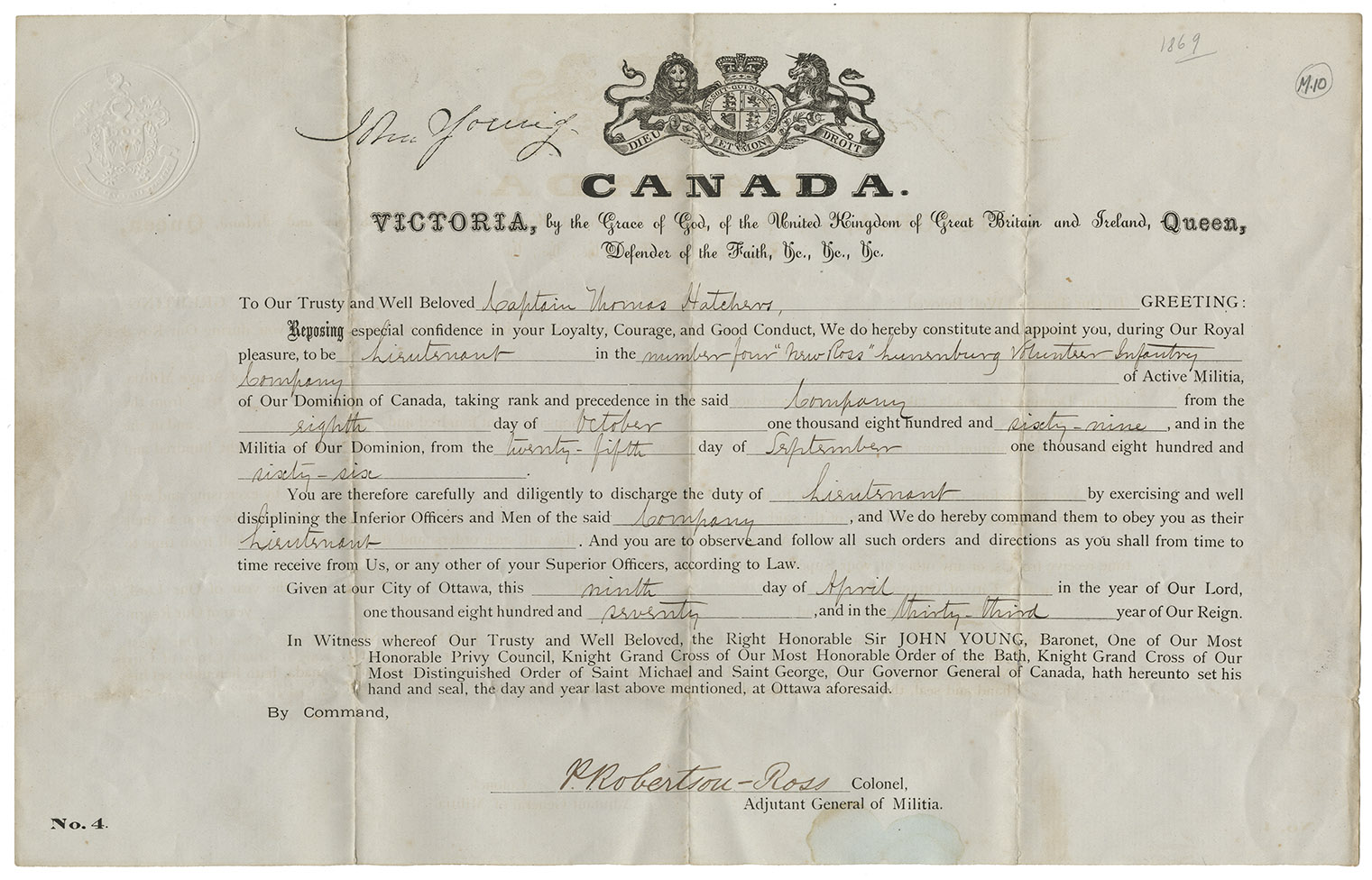 Note: Item discusses the appointment of Captain Thomas Hatcher to be Lieutenant in the number four "New Ross" Volunteer Infantry; the appointment is scheduled to begin in said company on the 8 October 1869, and in the Militia on the 25 September 1866. 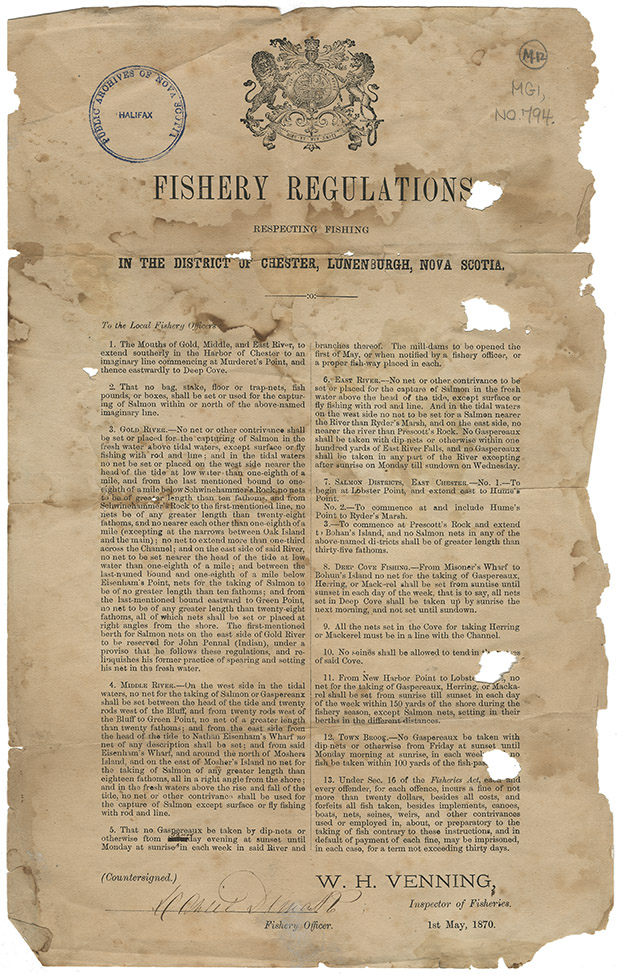 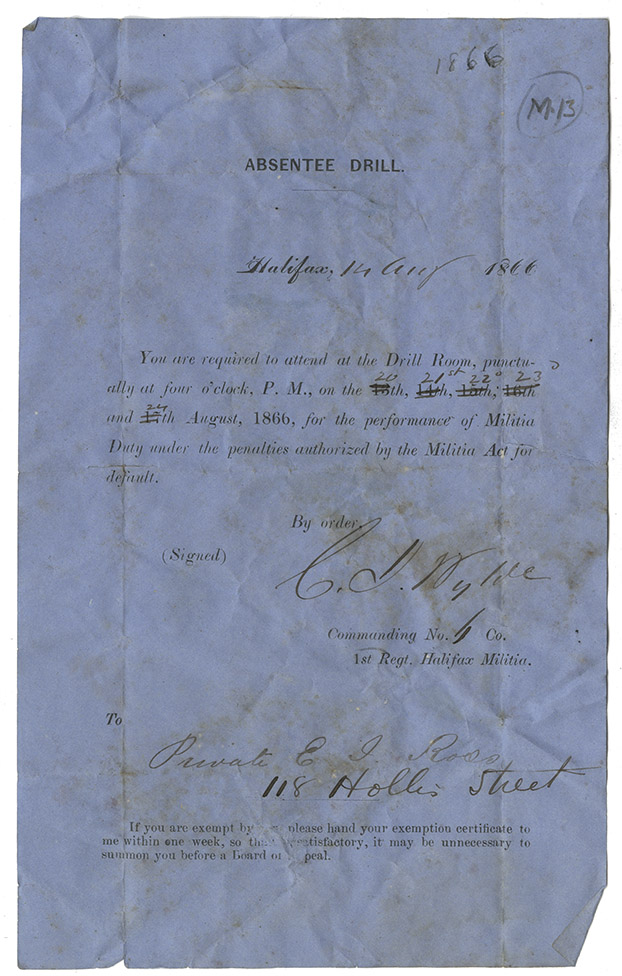 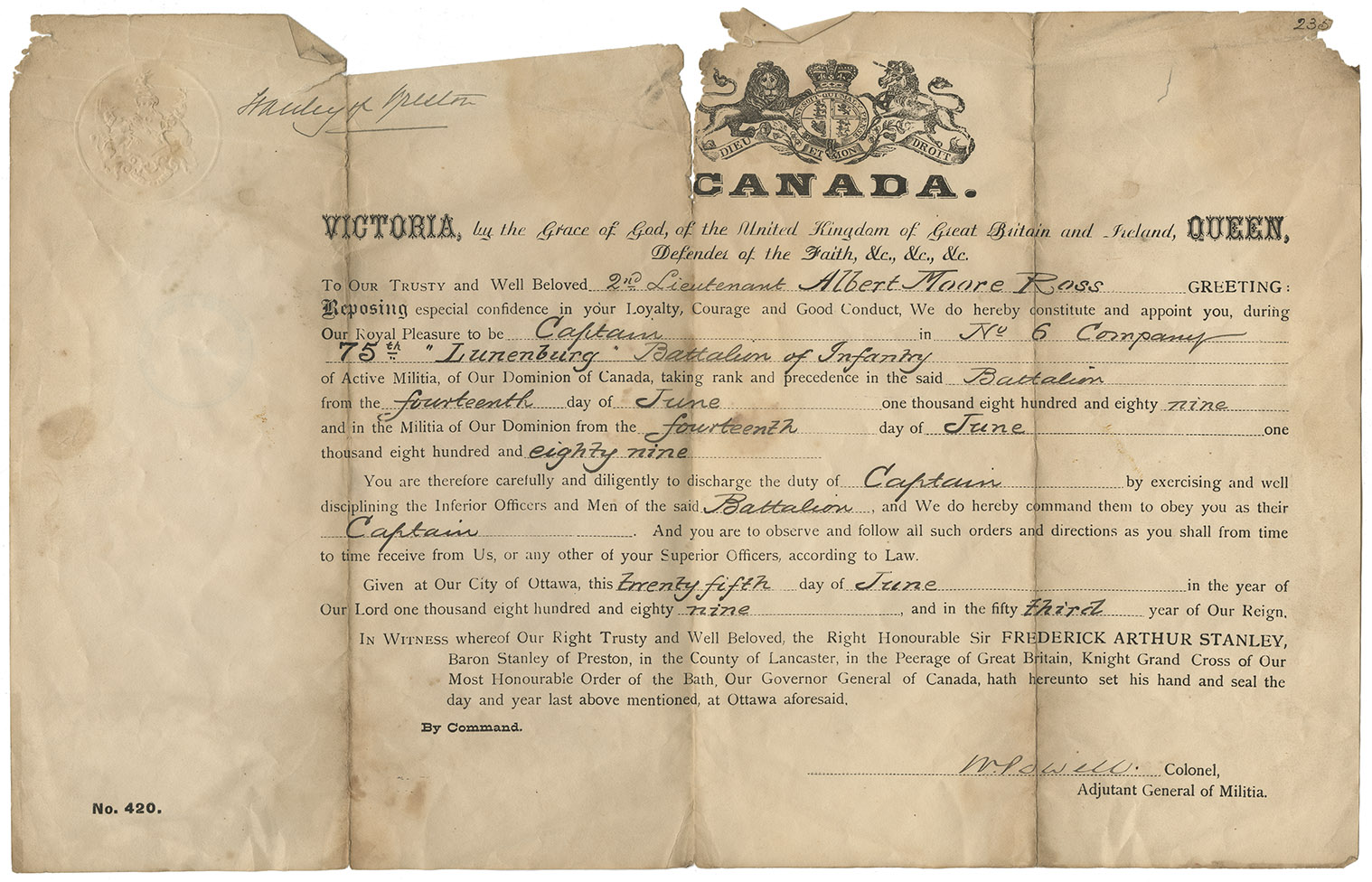 Service Roll of No. 6 Company, 75th "Lunenburg" Battalion of Infantry

Note: Item contains signatures, residences, ages and marital statuses of the members if the infantry; most are from New Ross and surrounding area; some are from Lunenburg. 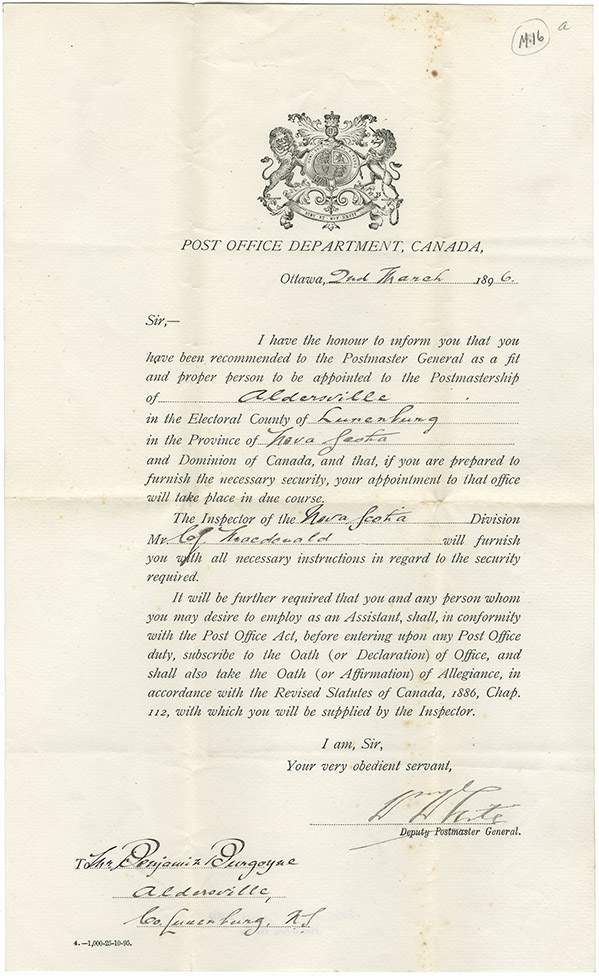 Note: Item discusses Benjamin Burgoyne's appointment of Postmastership of Aldersville, in the county of Lunenburg. 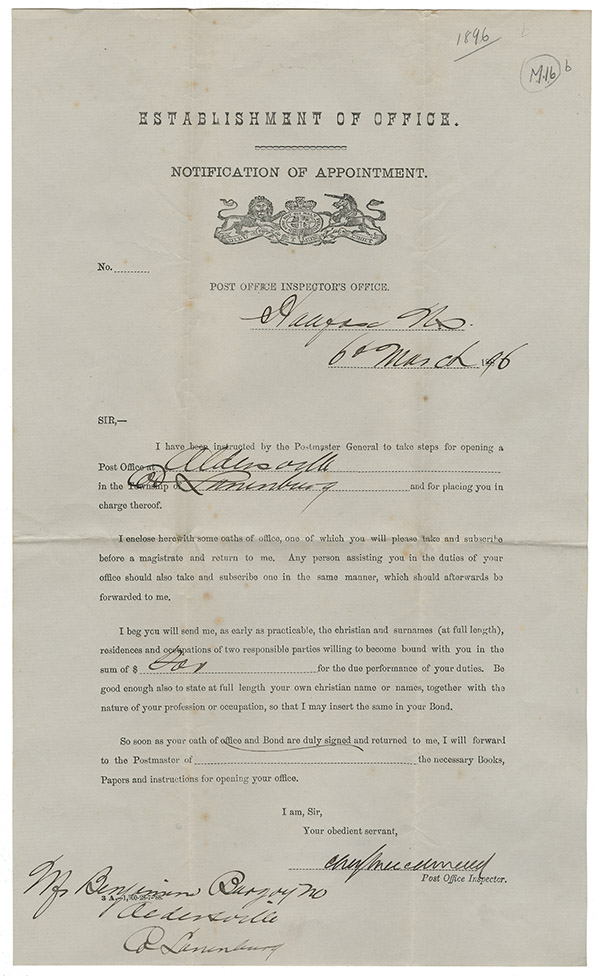 Note: Item discusses the opening of a post office in Aldersville, Lunenburg and placing Benjamin Burgoyne in charge of the new building. 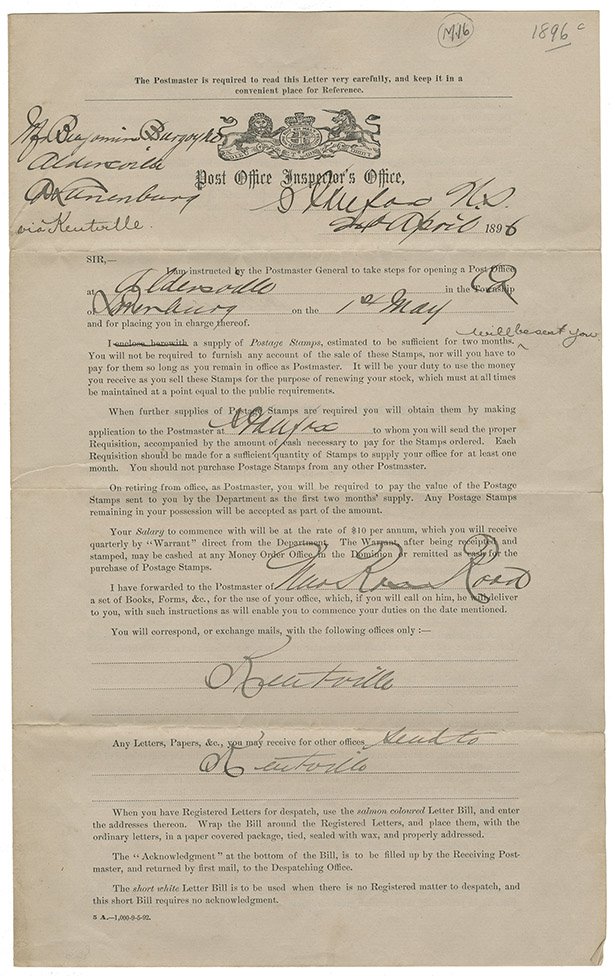 Instructions from the Post Office Inspector's Office to Benjamin Burgoyne

Note: Item discusses instructions to Benjamin Burgoyne on the new post office, which will be opened on 1 May 1896. The new office in Aldersville will be supplied with at least two months of postage stamps, and if he requires additional supplies a request can be made to the Postmaster in Halifax. Burgoyne will receive books and instructions from the Postmaster at New Ross Road and is to only exchange correspondence with the Kentville office. 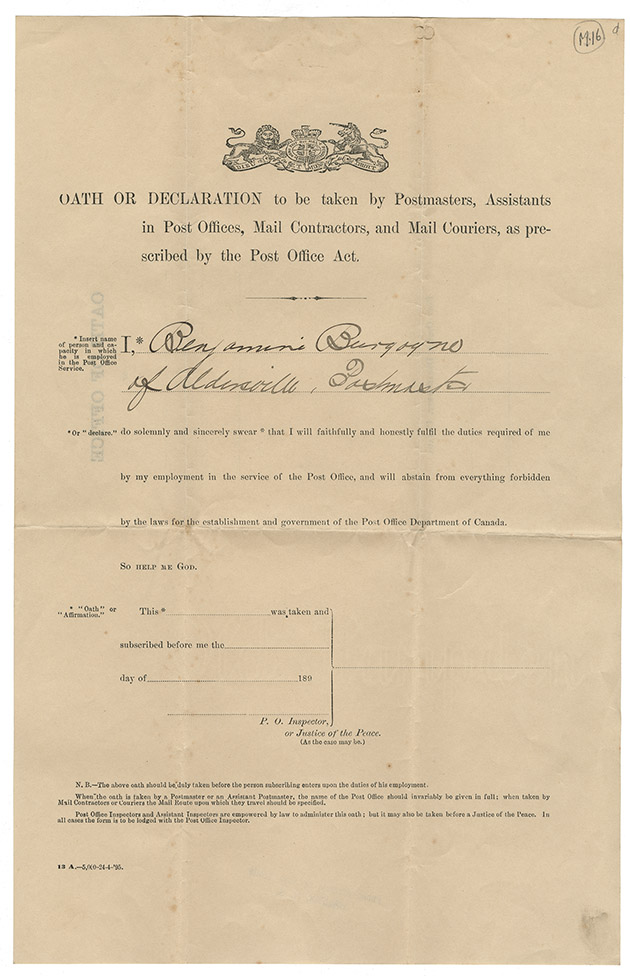 Note: Item discusses the "Oat of Declaration to be taken by Postmasters, Assistants in Post Offices, Mail Contractors, and Mail Couriers, as prescribed by the Post Office Act" made by Benjamin Burgoyne. (There is a space to date and sign the act by an official but this was left blank). 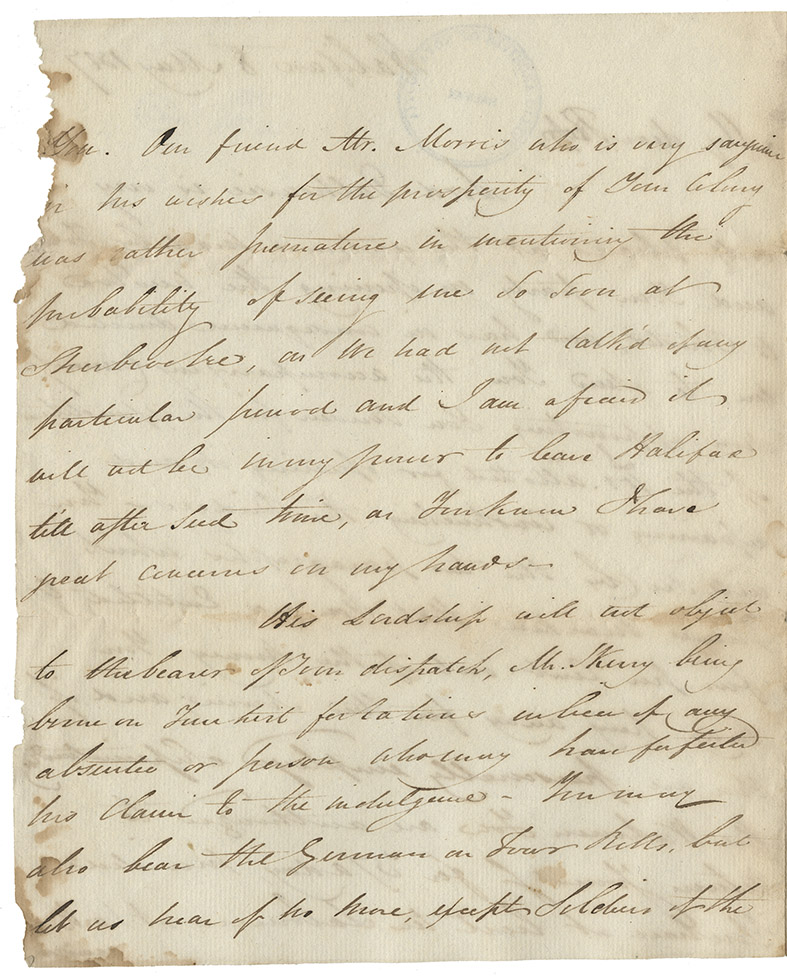 Note: Item discusses the official appointment of Benjamin Burgoyne to the Postmaster of Aldersville, Lunenburg. Document titled as "Letter of Appointment to Postmastership". 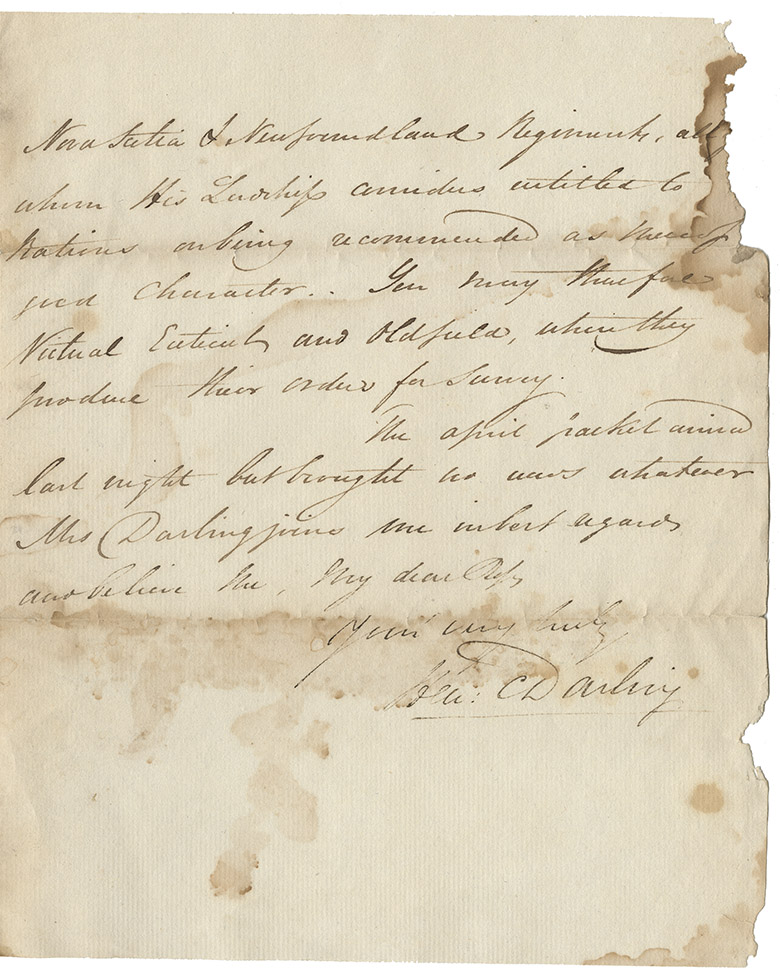 Note: Item discusses the increase of salaries for rural postmaster from sixty dollars to one hundred dollars. This increase was decided by the Postmaster General at the House of Commons and the increase will date from 1 April 1928 (On this item there is no specific salutation, but as the materials were grouped with Benjamin Burgoyne's it is possible that this letter was for him). 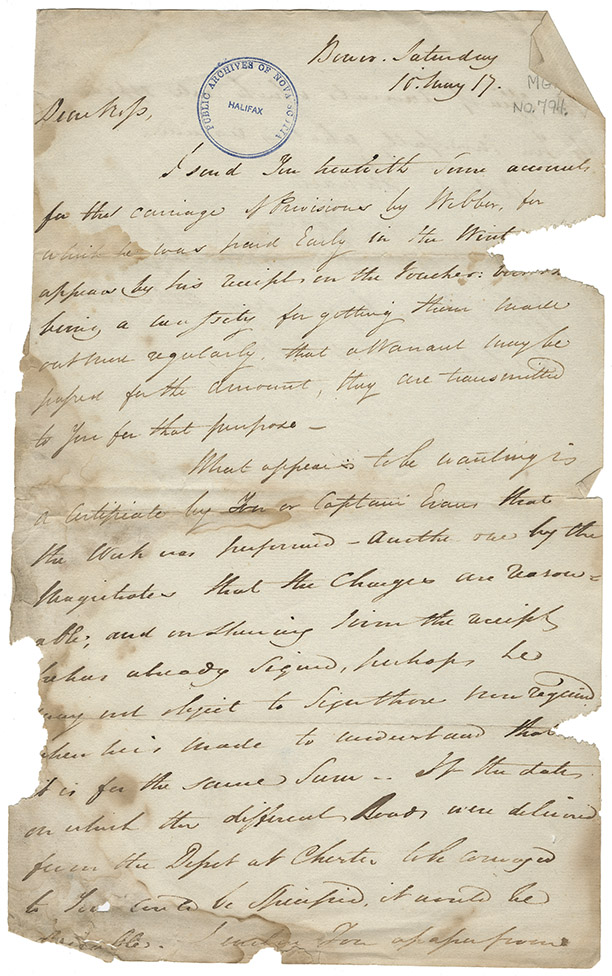 Note: Item is to Mr. Benjamin Burgoyne in Aldersville, Lunenburg (via New Ross). Envelope is stamped with "ON HER MAJESTY'S SERVICE" and written on the envelope is "Papers of Establishment of Post Office". Stamped in the right hand corner is "Halifax, NS MR. 7 96". 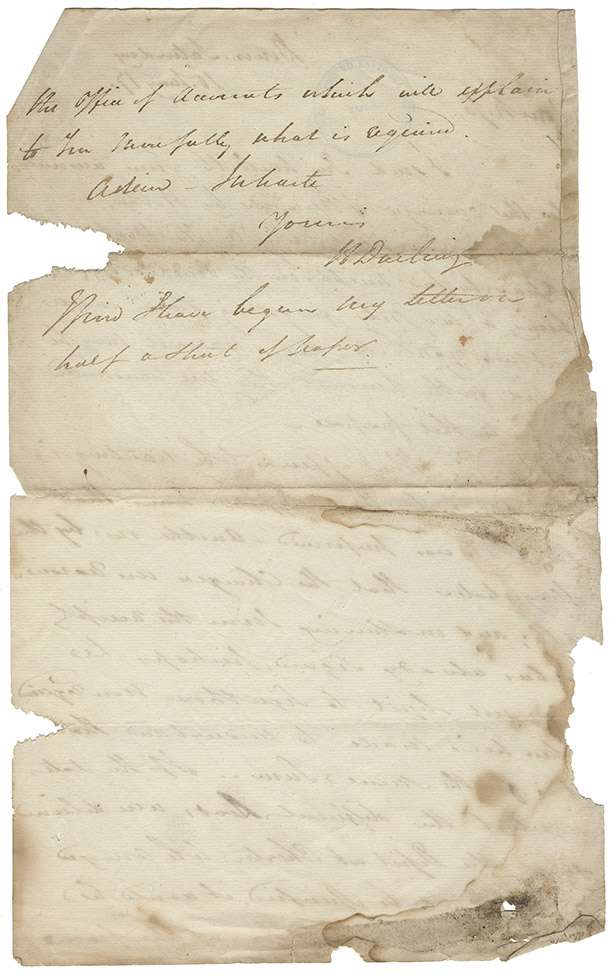 Note: Item discusses the part that Henry Ross played in the Red River Rebellion. Written in bold across the top of the letter is "Please don't publish this letters" Ross describes Riel as having returned to his native county to attempt at "getting halfbred rights". Ross describes Riel as being viewed as a good representative for these people, but that no one had imagined a war would take place. Ross describes soldiers as entering Winnipeg with the intention of arresting Riel and any of his followers. Ross states that what everyone knows now "it was undoubtedly the intention of the halfbreds and Indians to murder every white-settler". Ross says that on the 18 March the French made their first stand by gathering up all of the Scottish and English "halfbreds". Ross and an "old chum" of his Astley ? wanted to find out what the French were "up to"; discusses their journey. Gives a vivid description of being assaulted by a "band of twenty half-breds"; they were taken to Duck Lake by these individuals at gun point. Ross and his friend were help in a small room in the upstairs (of a house?) and the following day more hostages were added to their room. Ross describes the Battle of Duck Lake as taking place right next to where they were being held hostage. After the battle Riel summoned Ross to speak to him (as Ross knew Riel previously) and Riel explained that he was setting up a new Provisional Government and offered to make Ross a full sheriff. Ross asked Riel if the bodies in the field could be collected, after deliberating with his council Riel allowed Ross and another prisoner, Sanderson, go out and collect the bodies and place them in a small Indian house. Ross describes his sorrow of seeing many dead boys he had come to know well for the past five years. Ross describes leaving Duke Lake and travelling to Batoche, were the Indians debated on whether to kill him or not; describes being a prisoner for a week with no chance to escape. Ross was also present for the Battle of Fish Creek; where he his feet and hand were bound and was placed in a small cellar. After the battle, Middleton was preparing to seize the area, and Ross was once again placed in the cellar. He remained there for ten days until troops charged in and rescued the prisoners; describes being held in a building that was under fire, with bullets hitting the house like "hail". Ross's companion, Astley ?, ran to Middleton to tell him all that they had hear Riel say about the battle. After the battle was over Ross and Astley ? tried to doctor the wounded soldiers, they washed the wounds and for some "gave them so much laudanum that they never woke up again". Ross explains that he knew they were going to die anyways so he thought he would help them out and make it quick. Ross stayed for a few days after the battle and described the dead bodies and how many of the women were burning them. After several days he got a horse and headed to P.A. Ross says that he has written ten pages but is only telling half of what happened to him; and he was making a claim of 5 000 dollars in damages to the government because he felt he deserved something. Riel was taken to Regina to be tried and Ross was an important witness in the case. End the letter for apologizing for any mistakes in the writing, 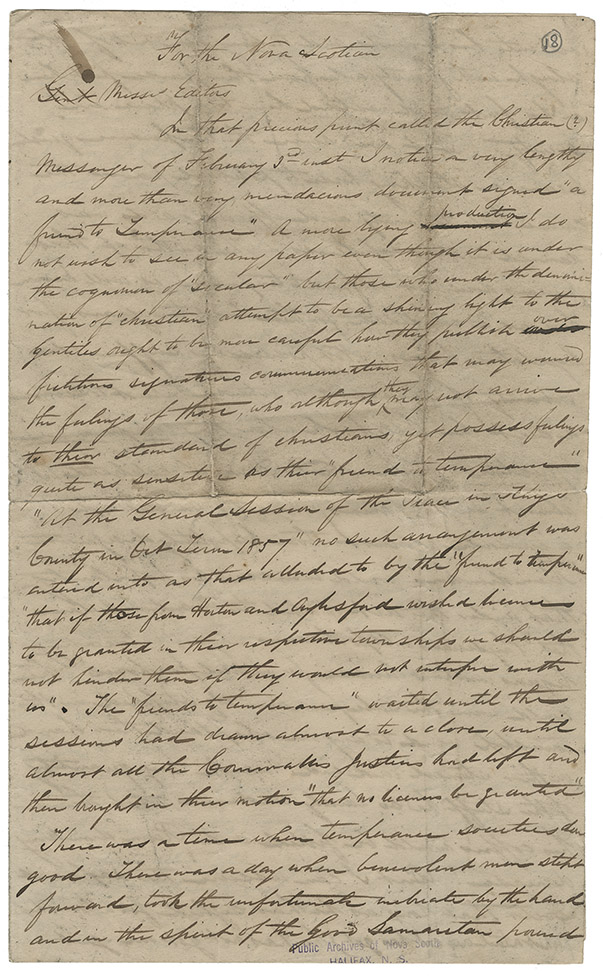 Letter from L. Pinchem ? to the Nova Scotia Editors

Note: Item discusses the writer's annoyance with a lengthy document published in the Christian Messenger which was signed "a friend to Temperance"; says "A more lying production I do not wish to see in any paper". Acknowledges that at one point there were Temperance movements that "did good", but that the writer of this particular document was a well known candidate for the legislature honors for the past ten years. Writer wanted to ensure that alcohol would be abolished in the township, to ensure that "coffee would be filled and Rum drinking decreased". 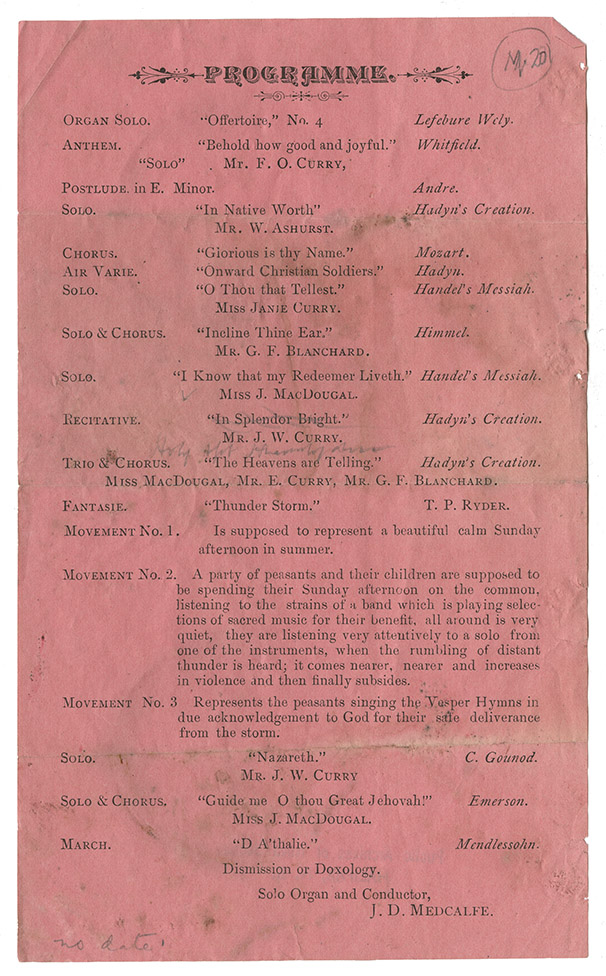 Note: Item discusses a musical program of the musical numbers that were to be performed at said concert, many of them religious in nature (there is no indication on the document when or where this concert was taking place). Only name the is printed is J.D. Medcalfe, who is noted as being the "Solo Organ and Conductor). 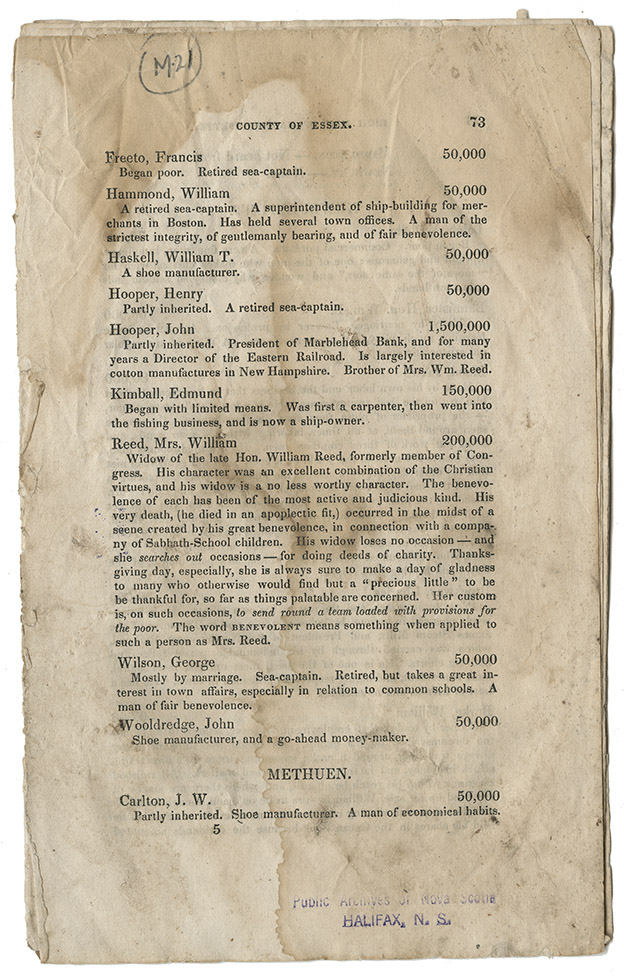 Note: Item discusses a chapter of the book entitles "County of Essex", which contains a list of names of men and their net worth and how they accumulated their money.