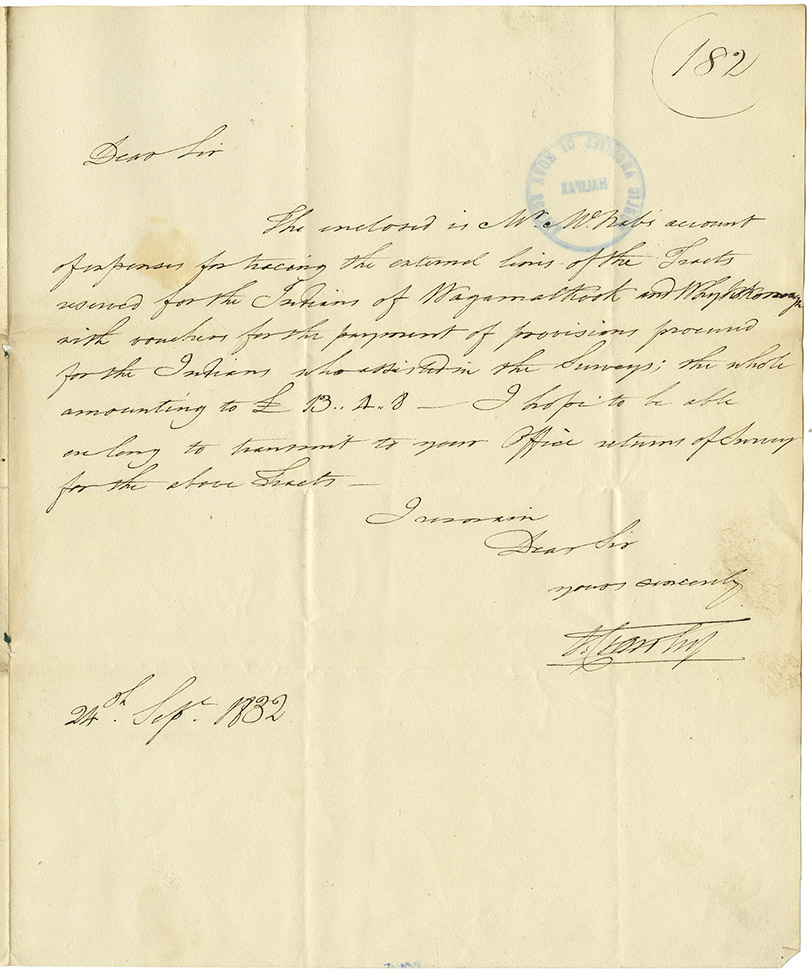 Letter from Thomas Crawley to Rupert George enclosing an account of McNab for surveys of Wagamatcook and Whycocomagh. 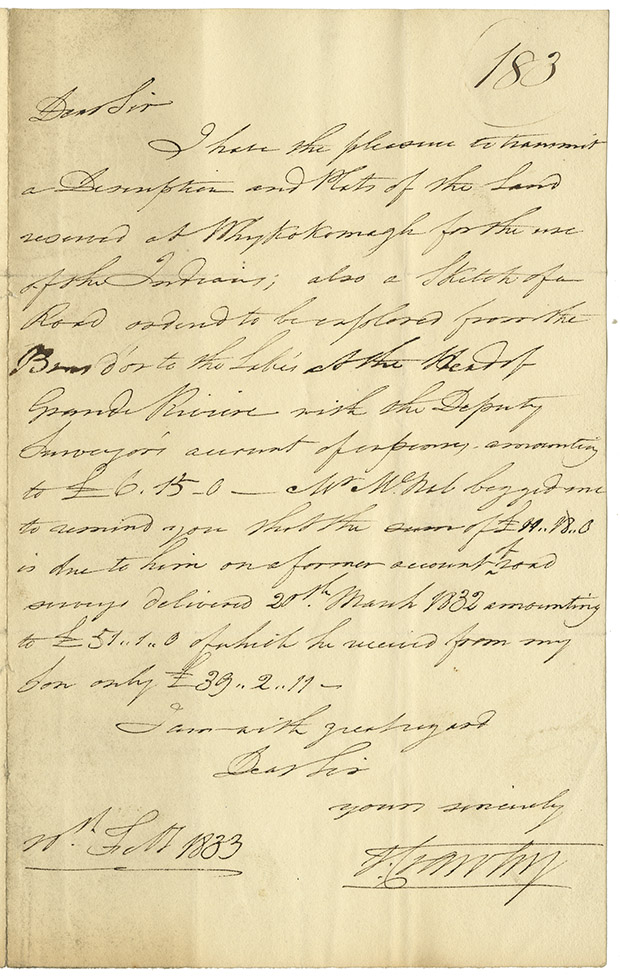 Letter from Thomas Crawley to George transmitting a description and plot of the land reserved at Whycocomagh for the Mi'kmaq and accounts of surveyors for work done. 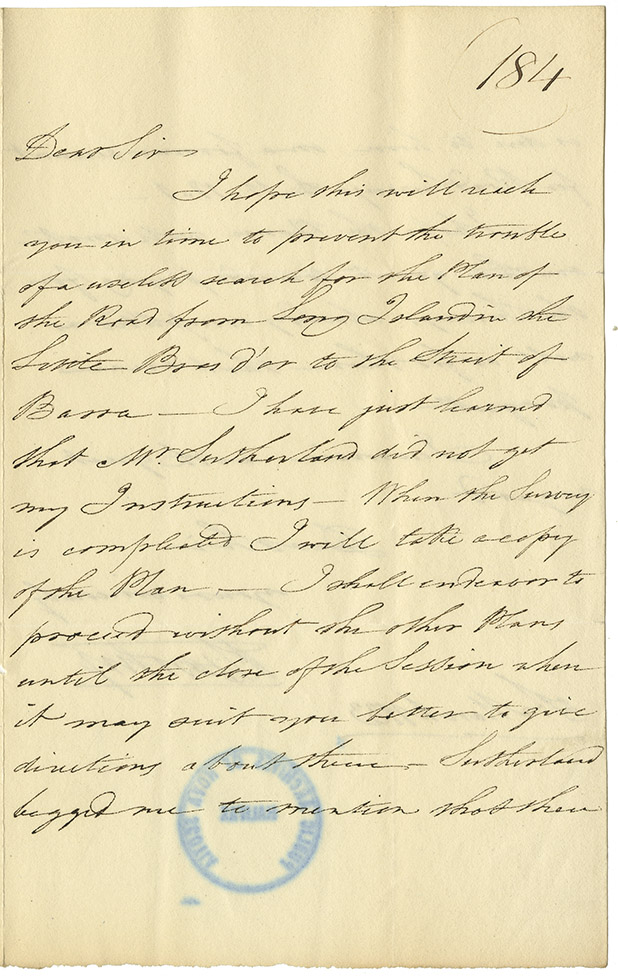 Letter from Crawley to George regarding surveys of roads and accounts of deputy surveyors. 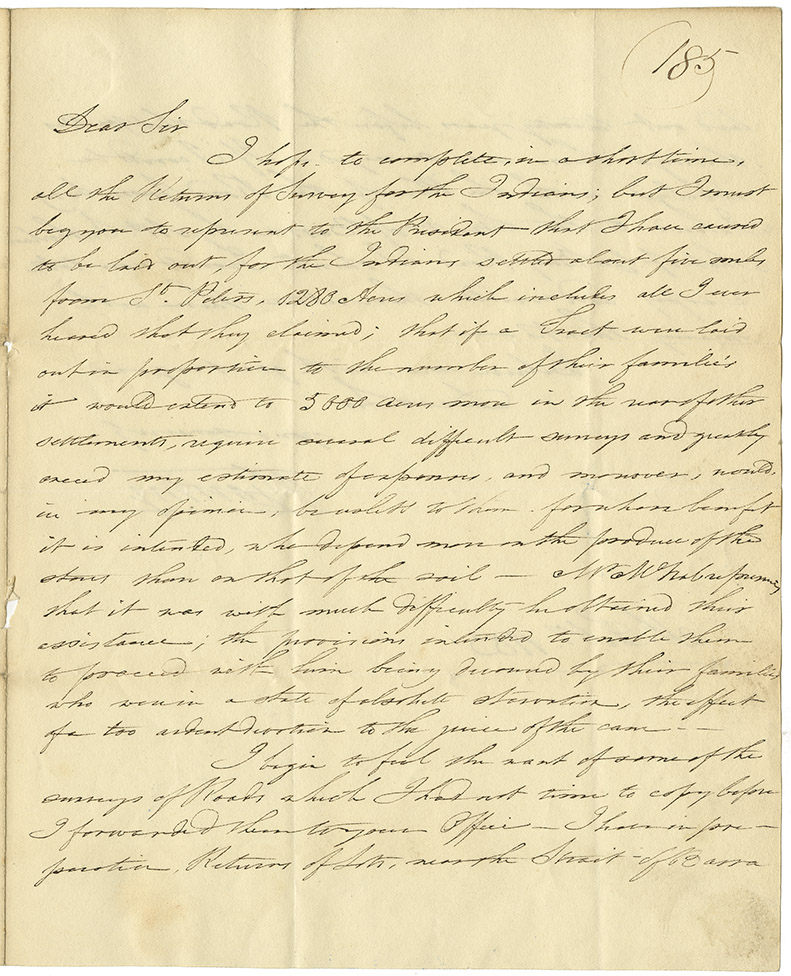 Letter from Crawley to George regarding his hope to soon complete all the 4 of survey for Mi'kmaq in Cape Breton. He notes that there appears to be some difference in the amount of land to be laid out at what is now the Chapel Island reserve. Families there are starving. 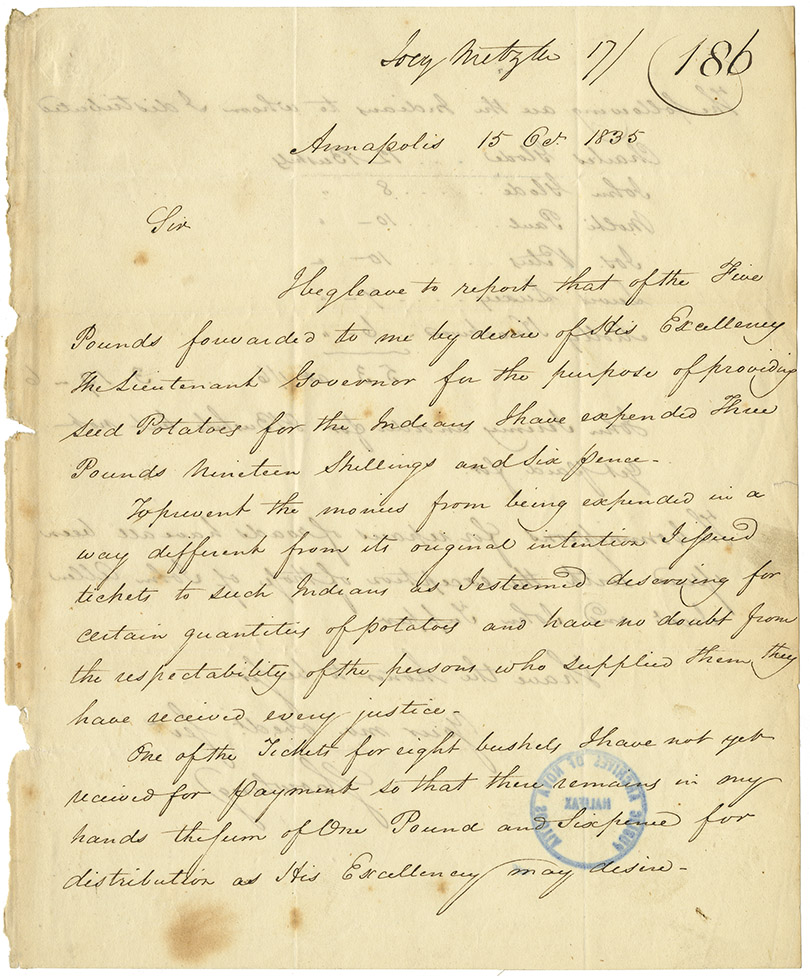 Letter from J. Cowling reporting on the expenditure on the five pounds forwarded ro him to be spent on Mi'kmaq relief. He distributed tickets, redeemable from merchantds for potatoes, to various Mi'kmaq. Dated Annapolis. 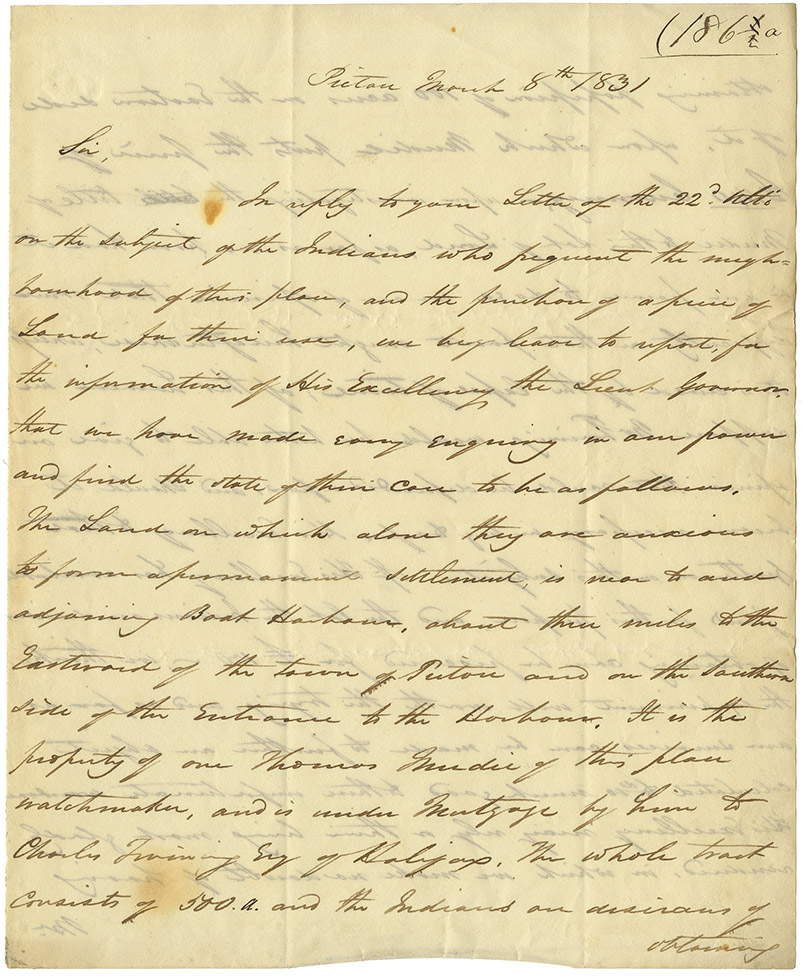 Letter to George reporting that he has met with the Mi'kmaq of Pictou who have advised that they are anxious to make a permanent settlement at Boat Harbour, now owned by a Thomas Mudie of Pictou. Tract consists of 500 acres and Mi'kmaq want 100 acres on the eastern side of his tract. 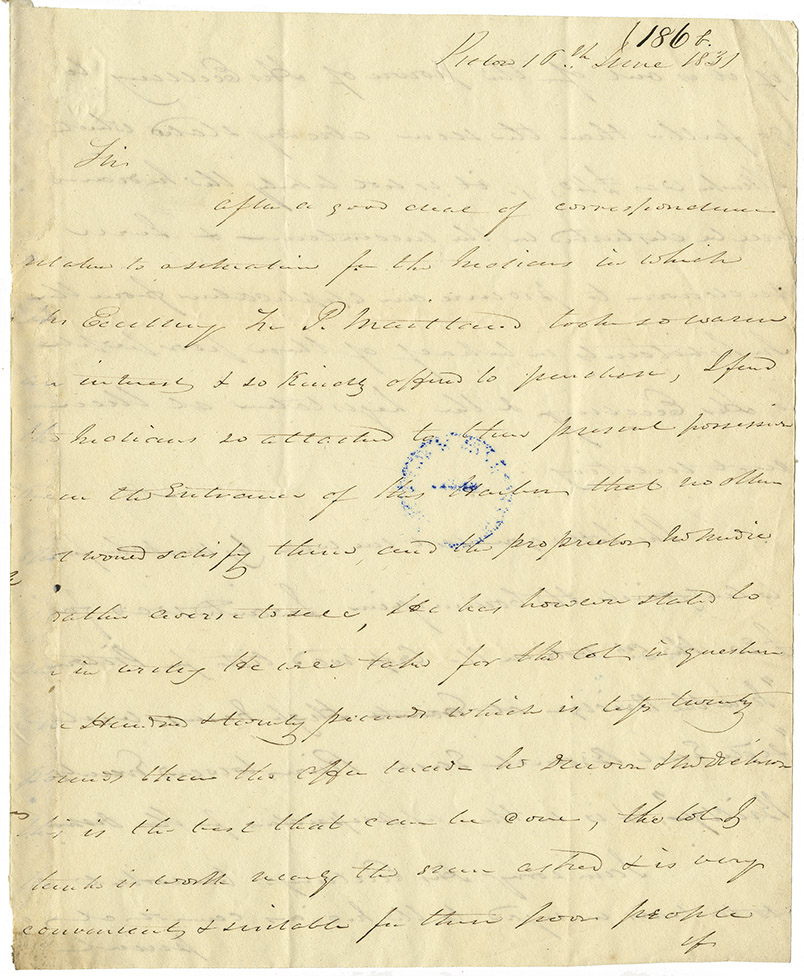 Faint letter from George Smith to George regarding the purchase of land for the Mi'kmaq at Pictou. Refers to RG 1 vol. 430 no. 186a. 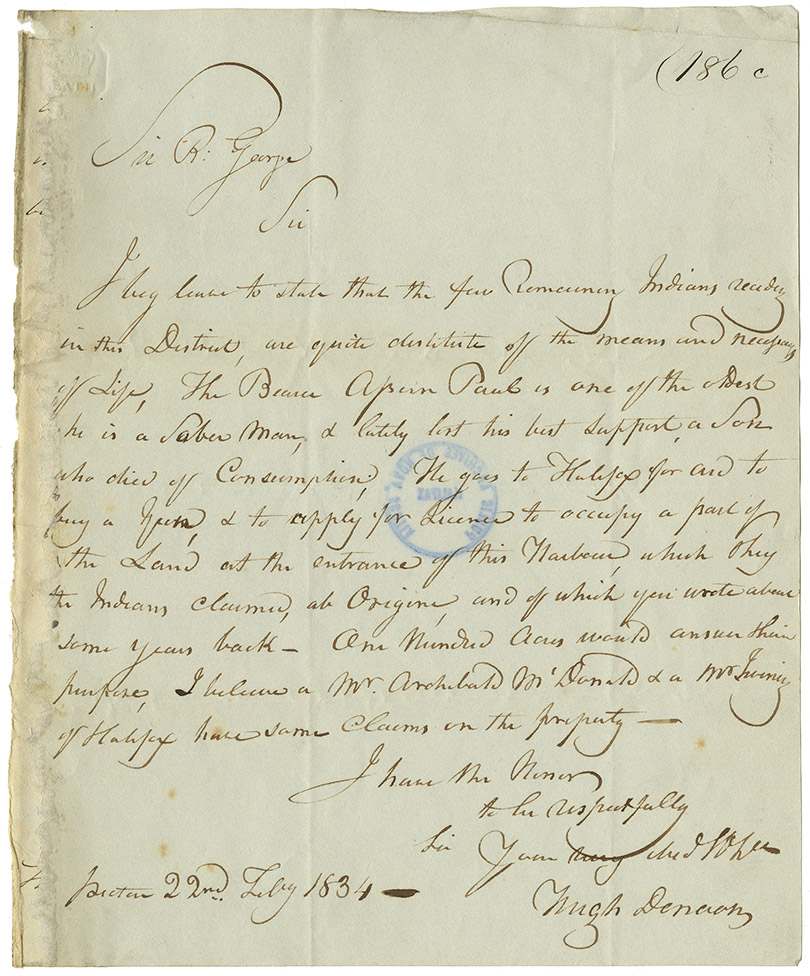 Letter to George reporting on the condition of the Mi'kmaq in Pictou and the sending of a letter by Apsein. Inquires again about obtaining 100a for Mi'kmaq at the mouth of the Harbour as was discussed some years back. May refer to Boat Harbour and RG 1 vol. 430 nos. 186, a and b. 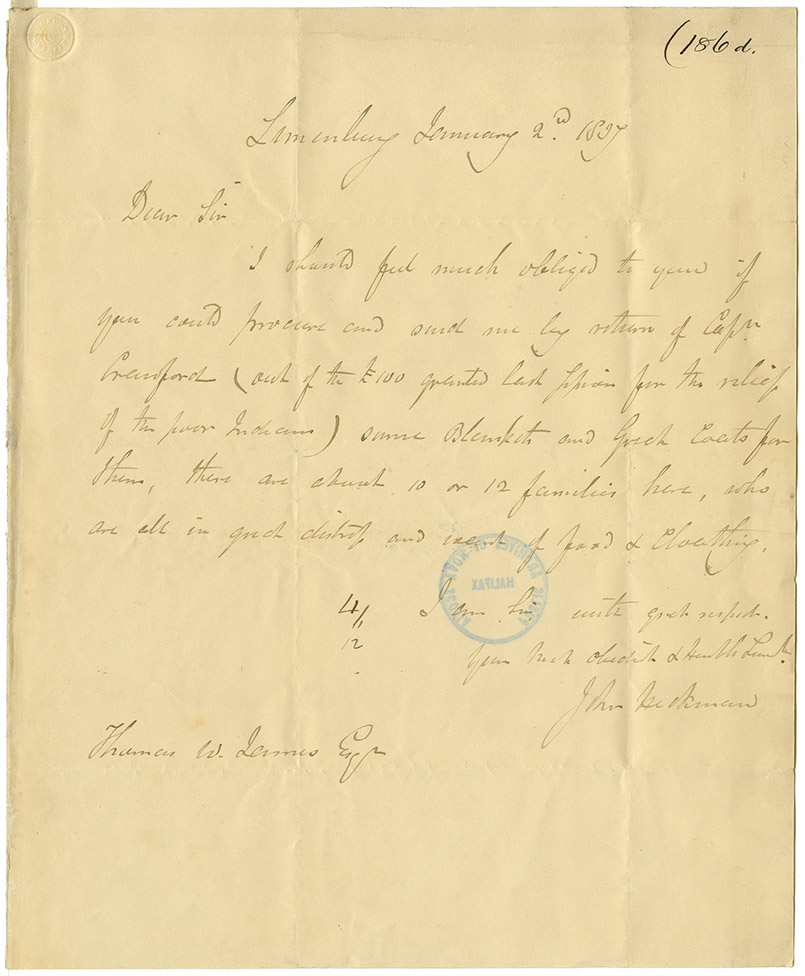 Faint letter to Thomas W. James, Secretary's Office, requesting relief for the Mi'kmaq of the area (dated Lunenburg, 1837). Also includes petition of Francis Toney on behalf of Mi'kmaq residing in the eastern part of the township of Rawdon seeking relief (dated 1837). Followed by a note dated "Thursday" from the son of Lt. Gov. Colin Campbell to Sir Rupert George stating "My father desired me to send down the Indian with the petition to you." Also includes testimonial from M. Withrow, J.P., certifying the Toney petition. Includes backer to petition with notes about relief distributed as a result of petition. 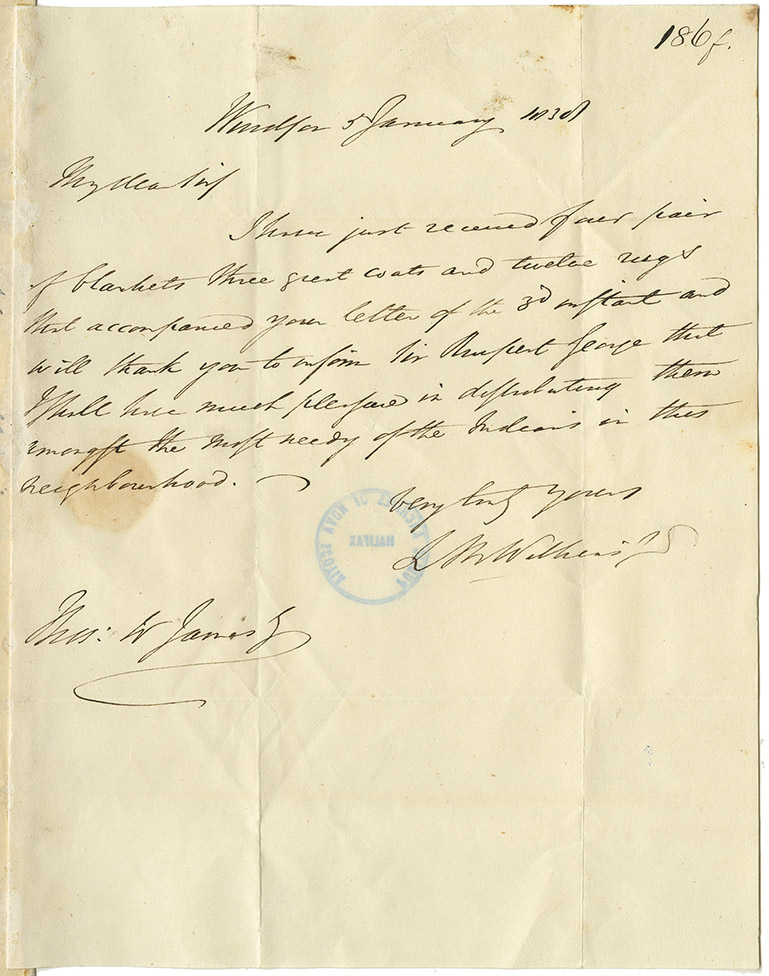 Letter from L.M. Wilkins to James acknowledging reciept of blankets, great coats and rugs for relief of the Mi'kmaq. Dated Windsor. 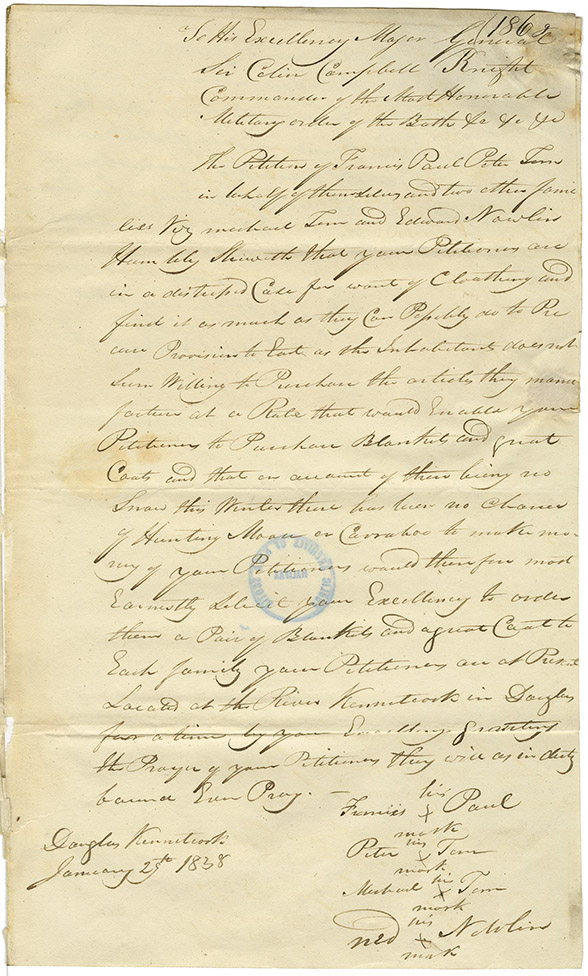 Petition of Francis Paul, Peter Tom, Michael Tom and Edward Nowlins for relief for themselves and their families. Includes backer with note asking Thomas James to attend to petition. Dated at Douglas, Kennetcook. 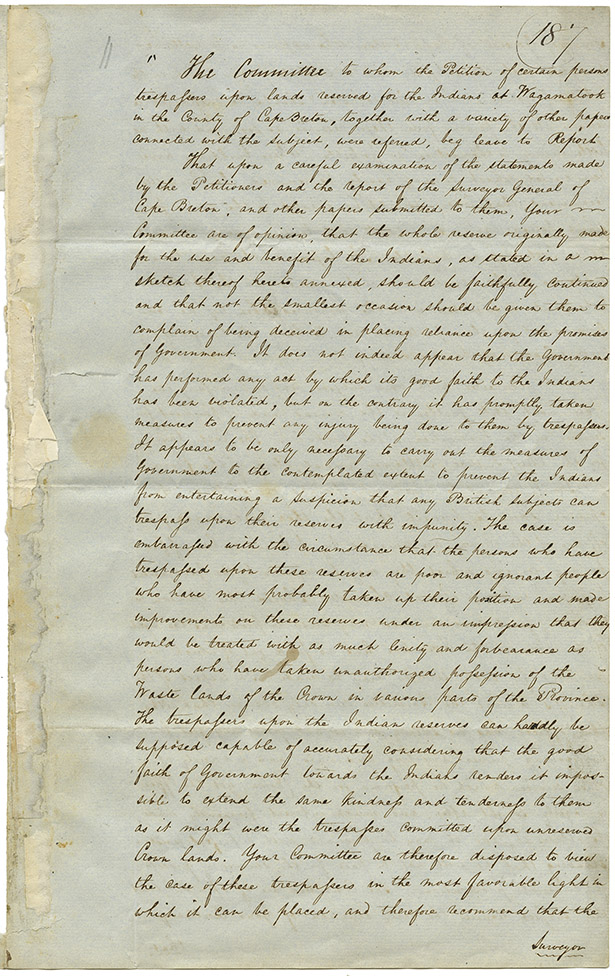 Report of the Committee "to whom the petition of certain persons trespassers upon the lands reserved for the Indians at Wagamatook [sic] in the county of ca pe Breton together with a variety of other papers connected with the subject." Dated at Halifax. 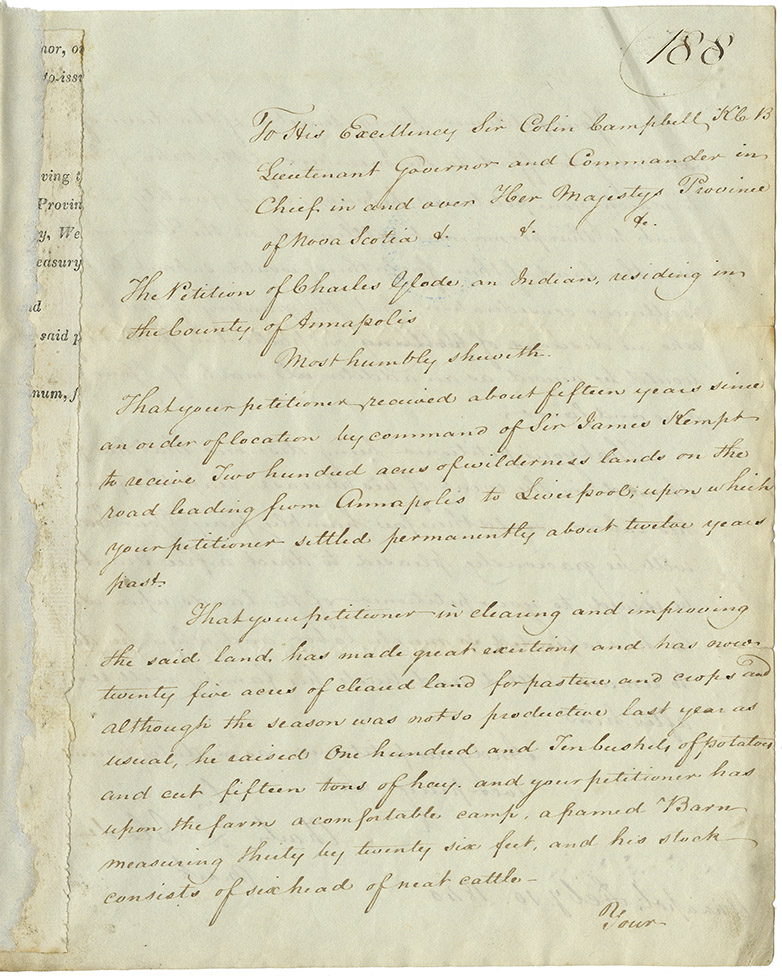 Petition of Charles Gloade, Annapolis, for a grant of 200a promised to him some years since by James Kempt upon which he has settled amd made improvements. Includes testimonials and note from the Commissioner of Crown Lands, John Spry Morris, stating he is afraid that if Gloade is given a free grant, that an 'unscrupulous' white person will take his land from him. Backer includes note that the Provincial Secretary approved Gloade a free grant of land. 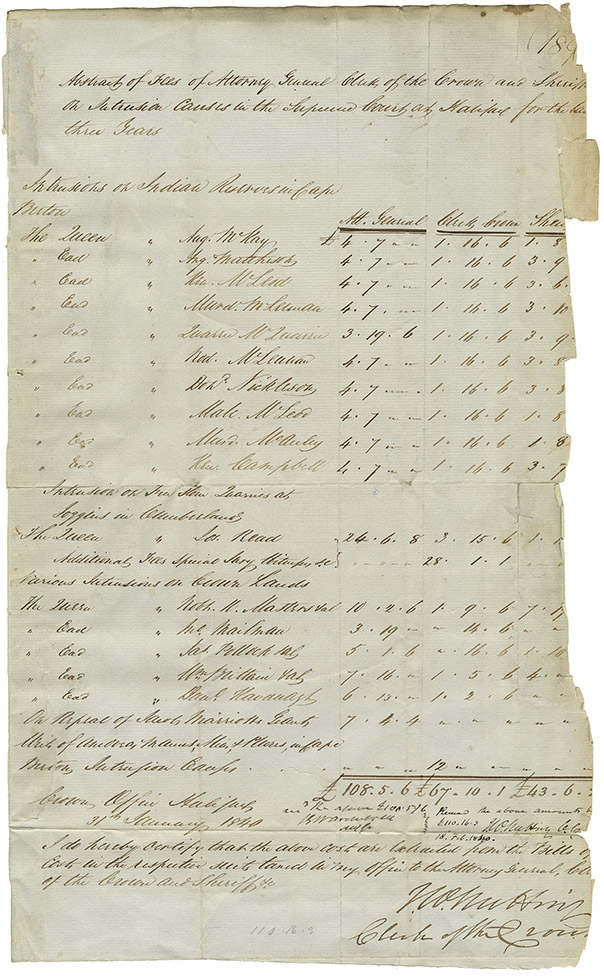 Abstract of fees Attourney-General, Clerk of the Crown, and Sheriff on "intrusion causes" for the last three years. First of the ten cases listed fall under "Intrusions on Indian reserves in Cape Breton." Dated Halifax. 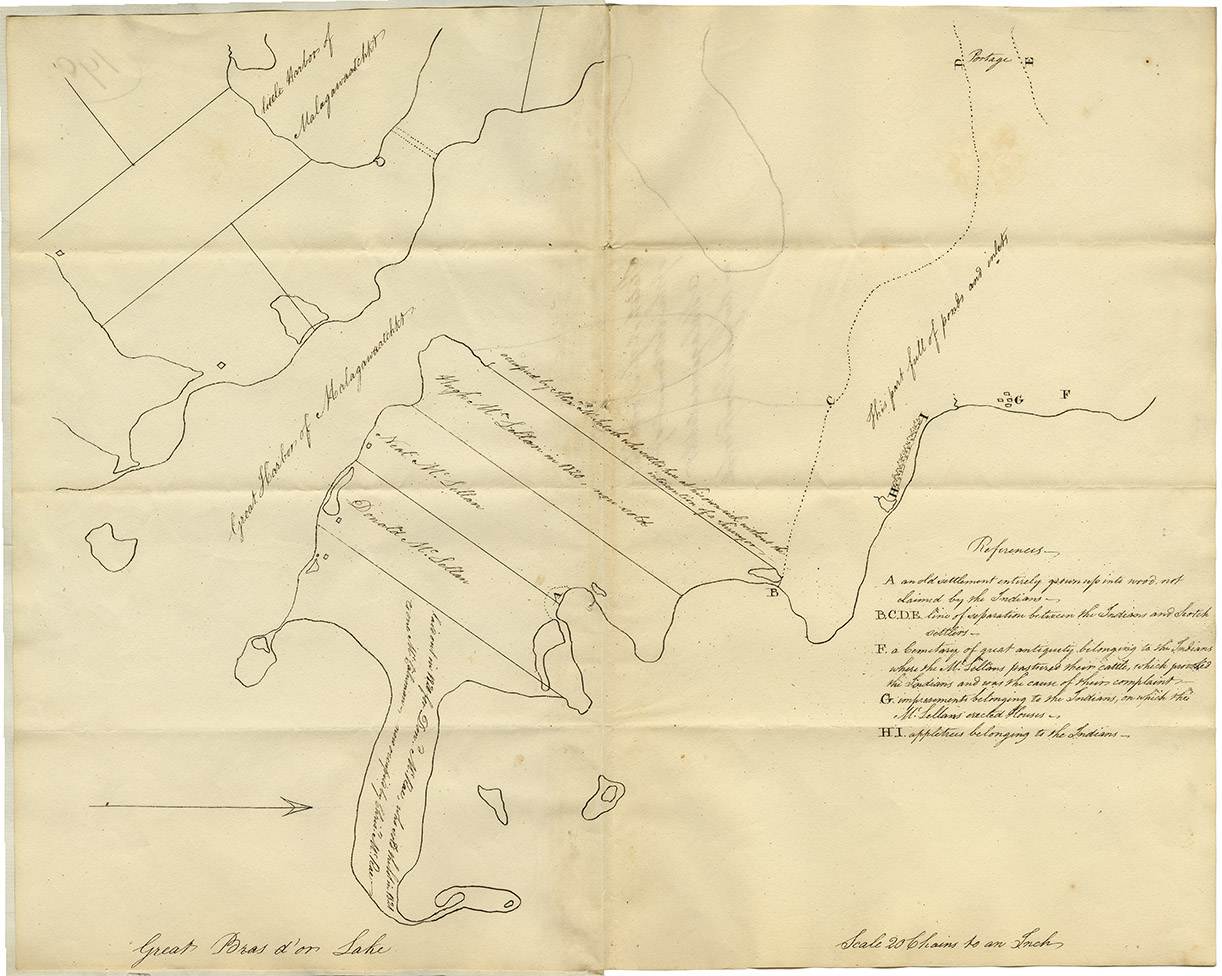 Map of trespassers on the Malagawatch reserve