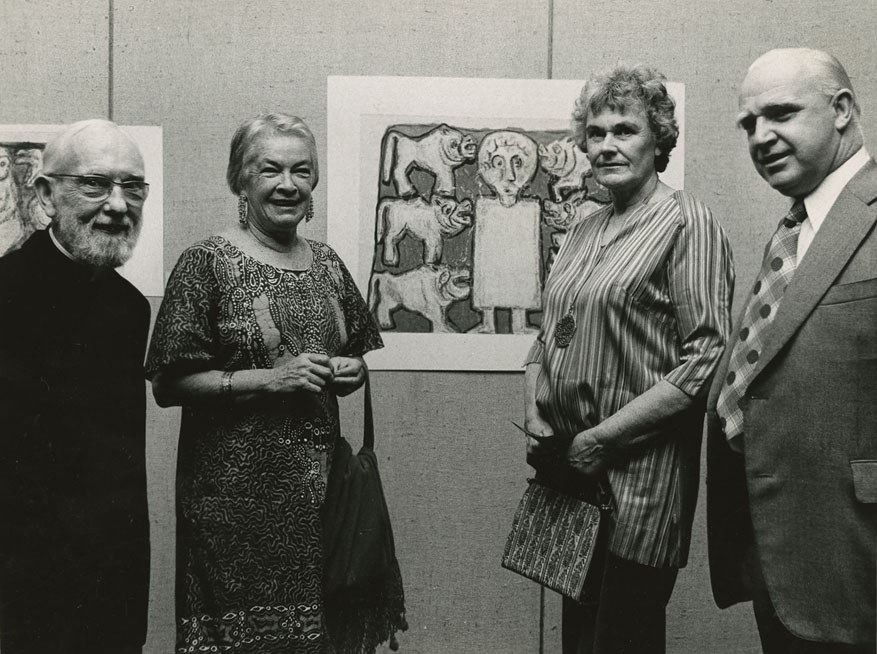 Aileen Meagher's art exhibition officially opened at the Saint Mary's University Art Gallery on 5 November 1973. Professor Emeritus Rev. M.W. Burke-Gaffney opened the exhibition. Ruth Wainwright was one of Aileen Meagher's art teachers and R.W. Ferguson was a member of St. Mary's Board of Governors. In the background is one of the artist's stone rubbings. This photograph appeared in The Mail-Star, 6 November 1973 [MG 1, vol. 2999, no. 1, p. 168]. Meagher spent 13 years assembling the contents for her art show which she named ''Early Christian Stone Carvings in Ireland from the 6th to 13th Centuries.'' Saint Mary's University's web site [http://www.smu.ca/newsreleases/2008/06-11-2008-04.html] states ''The Irish Collection of Aileen Meagher is a collection of approximately 150 rubbings and tracing of relief carvings taken from High Crosses throughout Ireland. Meagher made the rubbings and tracings on tissue, paper and fabric between 1960 and 1969 while traveling in Ireland. When she died in 1987, the collection was directed to the Chair of Irish Studies at Saint Mary's.''