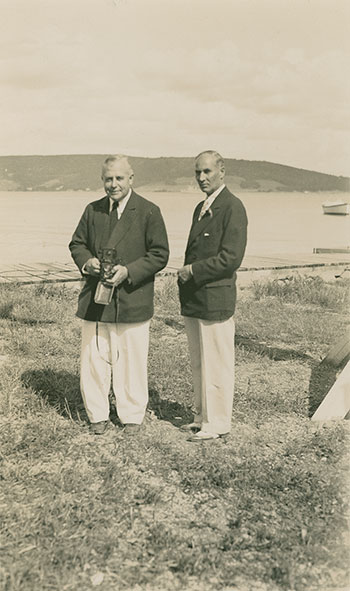 "The Pioneers of Canadian Aviation, Messrs. Casey Baldwin and J.A.D. McCurdy" Frederick Walker "Casey" Baldwin was born in Toronto, Ontario, in 1882. In 1907, F.W. "Casey" Baldwin and J.A.D. McCurdy, two college associates, were guests of at the Bell home when they took part in experiment regarding kite flying. Baldwin was chief engineer of the Aerial Experiment Association and manager of Graham Bell Laboratories, 1909-1932, specializing in hydrofoils. Casey Baldwin flew an airplane at Hammondsport, New York, on 12 March 1908 thereby being the first Canadian to fly an airplane. He was the Conservative Member of the House of Assembly for Victoria County, 1933-1937, and president of the Nova Scotia Conservative Association, 1937. Baldwin died at Beinn Breagh, Baddeck on 7 August 1948 and he was buried in the same hillside as Dr. Bell.