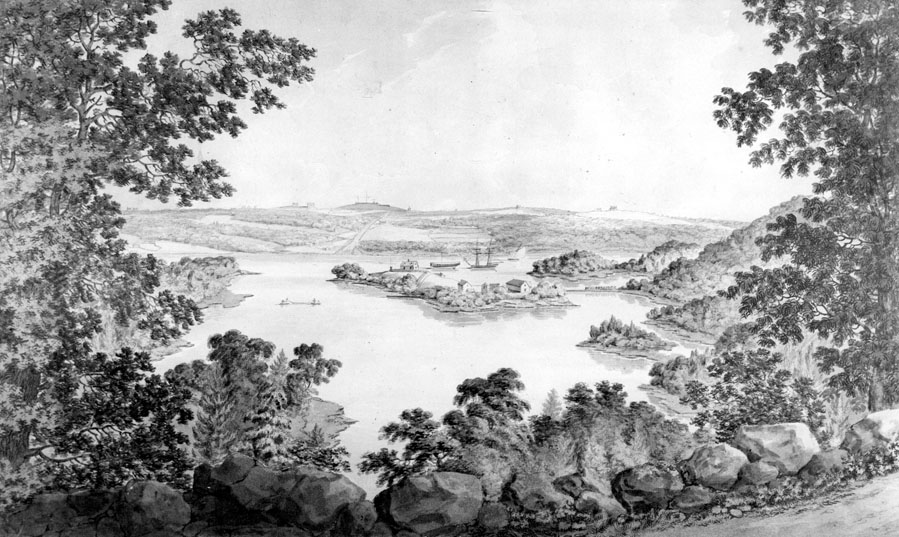 Parkyns' view looks down from the height of land above Cowie's Island, an early fishing station on the North West Arm, and then across in an ENE direction to the distant Citadel. The island was purchased by the British military ca.1803 and renamed in honour of Henry Dundas (1742-1811), first Viscount Melville and First Lord of the Admiralty (1804-5). A stone prison was immediately erected for French and Spanish prisoners during the Napoleonic Wars, then used for Americans during the War of 1812 and for German internees as recently as World War I. In peacetime it was occasionally used as a temporary receiving station for refugees or transient groups. Among those billeted were African Americans brought to Nova Scotia by Vice Admiral Sir Andrew Cochrane during the War of 1812 with the United States, when a proclamation was issued offering freedom to all southern Blacks who fled to the British forces. As a result, some 2000 refugees arrived in Nova Scotia between 1813-16, many settling at Preston, Hammonds Plains, Porters Lake, Beech Hill and other areas now within the Halifax Regional Municipality. Later, Foreign Legion volunteers raised in the United States by Joseph Howe to fight in the Crimean War, and inmates from the Poor Asylum after it burned in 1882, were also housed on the island; and on at least one occasion, in 1847, the military prison was used as a quarantine hospital.