Nova Scotia Advisory Council on the Status of Women 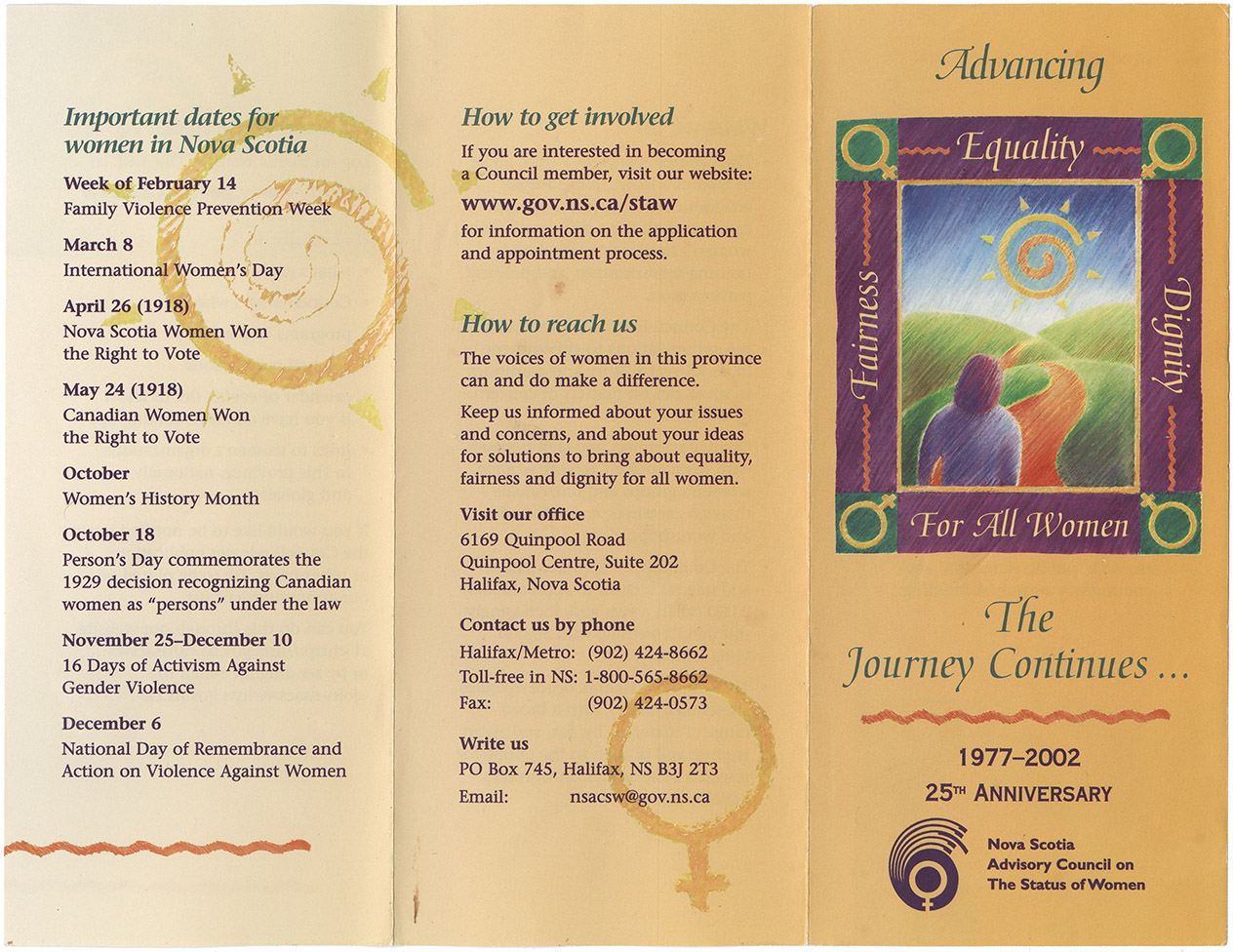 The journey of community and government to address violence against women

This Community Album is a snapshot of the significant work done to address Nova Scotia women's experience of intimate partner and sexualized violence. Started by the Transition House Association of Nova Scotia in 2009 and continued four years later in collaboration with the women’s community and the Nova Scotia Advisory Council on the Status of Women, it highlights government, community, and collaborative actions taken to address violence against women in Nova Scotia. Early achievements include:

This timeline is also a reflection of "which women" were being supported. What began as a movement focused primarily on the perspectives of white middle-class women, slowly began to recognize needs and include programs and services that addressed race, ethnicity, class, language, sexual identities, and sexual expression. It became clear that healing from gendered violence meant addressing the multiple barriers women face, including poverty, literacy, childcare, mental health, sex work, conflict with the law, parenting and more.

Due to funding challenges and differing philosophies women's groups worked in silos. There was a lack of trust by both government and community as departments seemed unwilling or unable to acknowledge or fund programs and services that women's organizations believed were needed for women to move forward in their lives.

The Nova Scotia Advisory Council on the Status of Women played an important role in bringing community and government together. Government departments and women-serving organizations began to listen and learn from each other and collaborated on initiatives that would support the recovery of women with complex barriers.

Connections were established early on with some of the larger women-serving groups, including the Transition House Association of Nova Scotia with locations across the province supporting women and their children experiencing intimate partner violence and Women Centres CONNECT representing Women’s Centres across Nova Scotia that provide supports, referrals and programming that reflect the specific needs of their individual communities.

One of the first examples of inclusion and collaboration was the establishment of Mi'kmaw Children and Family Services of Nova Scotia in 1985, empowered through an agreement between Canada, Nova Scotia, and the Mi’kmaq. For the first time, policy, programs, and initiatives reflected the culture of the Mi'kmaw people.

A decade later, with government and community collaboration, the Framework for Action against Family Violence was initiated to "improve the response of the justice system to incidents of spousal/intimate partner violence." (Government Response) Community organizations were working collaboratively with the Nova Scotia Advisory Council on the Status of Women, the Department of Justice, and the Department of Community Services to increase the safety of women, while also ensuring programs and services for women struggling with the realities of intimate partner violence were more inclusive. This Framework is still in place today.

In 2003, the Domestic Violence Intervention Act was declared, but not before significant advocacy by Transition House Association of Nova Scotia to ensure the bill reflected the reality of women's lives. For the first time, community groups were invited to be part of the development of the regulations for an act, and specific training was created and delivered to community partners. Throughout this work, collaborative bonds were forming between community organizations and government leaders and their staff.

Today, the province’s Sexual Violence Strategy has completed its first phase. The Provincial Committee – Training and the Provincial Committee on Training were comprised of youth, government and community organizations, and representatives from a variety of diverse communities. Their collaborative work produced award winning public service announcements on sexual assault and consent, as well as a comprehensive sexual violence online training resource. This is some of the most collaborative and inclusive work done in Nova Scotia to date.

For more information, please contact the Nova Scotia Advisory Council on the Status of Women.