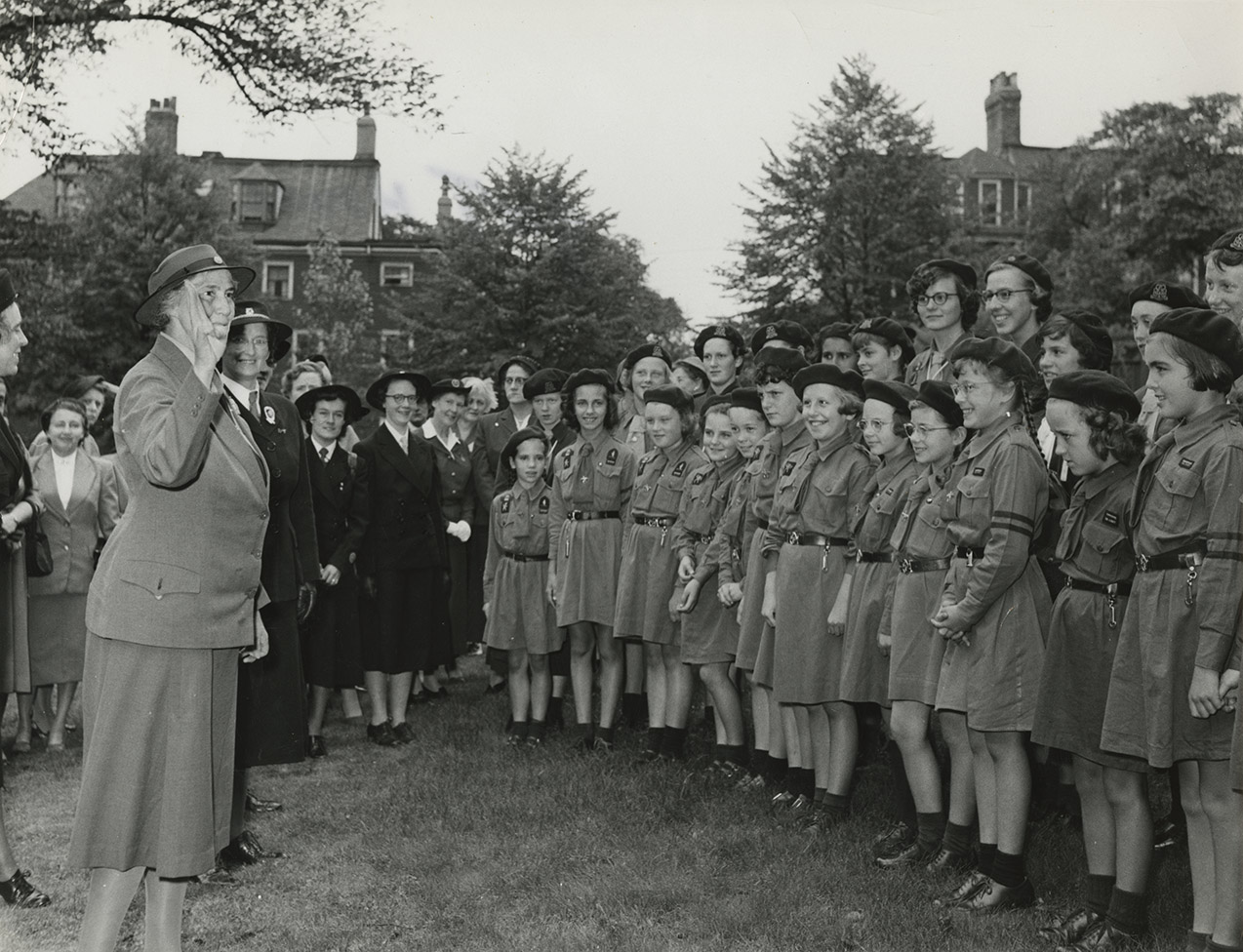 In the last 100 years, thousands of Nova Scotian girls and women have been involved in Guiding.

Throughout our history, Girl Guides of Canada–Guides du Canada (GGC) has prepared girls to meet the challenges that they face in their lives. Whether it was girls learning to bandage wounds during the First World War or girls of today working on their anti-bullying badge, Guiding continually evolves to reflect the needs and interests of contemporary girls and women. Today, Guiding's innovative programming is helping the next generation of Nova Scotia girls become confident, courageous and resourceful leaders.

It all began in 1909, when girls in England demanded to take part in a Boy Scouts rally organized by Lord Baden-Powell at London's Crystal Palace. Baden-Powell was impressed and he asked his sister, Agnes, to create a program just for girls. This was the beginning of Guiding. It spread to Canada in 1910 and by 1911, the Guiding Movement had reached Nova Scotia. The province's first Guide Company – 1st Halifax Company - was formed at Halifax's Trinity Church. By 1921 there were Guide units from Digby to Sydney.

According to Nancy Bowden Hutchins' book Guides, All Guides, among Nova Scotia's early Guiding units were some notable firsts. The first company of Canadian Girl Guides to be organized at a convent was the 15th Halifax Company in 1932. The first pack of African-Canadians in Canada was the 2nd New Glasgow Pack registered in 1933. Halifax had the first two Sea Guide companies organized in Canada.

The growth and development of Guiding Branches

Guiding has evolved over the last 100+ years to involve girls from ages five through to adulthood. And with it the branches of Guiding have grown from the original "Guides". The Guide program is now designed for girls nine to 12 years of age.

Brownies was the first Branch of Guiding to be created when little sisters began to tag along with the older girls. Their program and uniform were closely modelled on those of the Guides. A Canadian Brownie Handbook was published in 1965, and later developed into The Brownie Program: For Fun and Adventure! that we know today. Brownies is now for seven and eight-year-olds.

By 1916, the original Guides in the United Kingdom were beginning to outgrow the program although they did not want to drop out completely. At first, they formed groups of “Senior Guides.” Various other names were suggested but Baden-Powell again resolved the situation by suggesting “Rangers”. There were both Sea Rangers and Air Rangers and these eventually merged to become known as Rangers.

Very early in the history of Guiding, in both Great Britain and Canada, a need was recognized to provide leadership training for older girls so they might become Guiders. At first these groups were known as Cadet Corps. Cadet Units usually existed in girls’ schools and colleges.

By 1973, a new development in Guiding was evident: Junior Leaders, as they called themselves. These girls, between the ages of 15 and 17+, were helpers in Spark, Brownie and Guide Units.

Link is an extension of Guiding, providing a way for young women to retain their contact with the Movement at the time when they may be too busy with education or new careers to be active as leaders.

Pathfinders began in 1979 as a result of extensive research into the changing needs of Canadian Girls. The age group of 12 to 15 was identified as needing a different program. Frequently, Guide Companies had started a Senior Patrol for this age group. Their name was chosen from the writings of Baden-Powell who described pathfinders as those who could find their way in a strange country.

Sparks, the newest branch of Guiding, was launched in 1988 for five- and six-year-olds.

Today, Girl Guides of Canada continues to be a place that sparks the imagination of girls to take their place in the world and take action on what matters to them. As female role models, our adult members support girls to achieve and succeed – through fun, adventures, challenges and international experiences. Guiding continues to play an important role in communities right across the province.