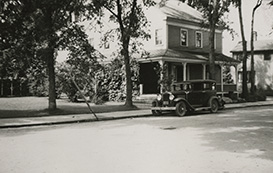 87: John Murdock home. Since this was taken is has been remodelled and is owned by Mac Young. The two elms were removed in 1957. To the right is the Cow Alley that "was to be reseved for His Majesty's subjects". Next to it on the left were once tenements, now three good-looking houses.

88: This was the old Heily house. Torn down and a very modern bldg, housing Graham Graves meat and grocery store in its place.

89: Known as the Sancton house, occupied after this picture was taken by Charles Prat who made it look very nice indeed. Next to the Aboiteau. Granville St. west.

90: Old snap shots of the huge snow-drifts in the winter of 1905. In some places there was an arch of snow high enough for the engine to go under!