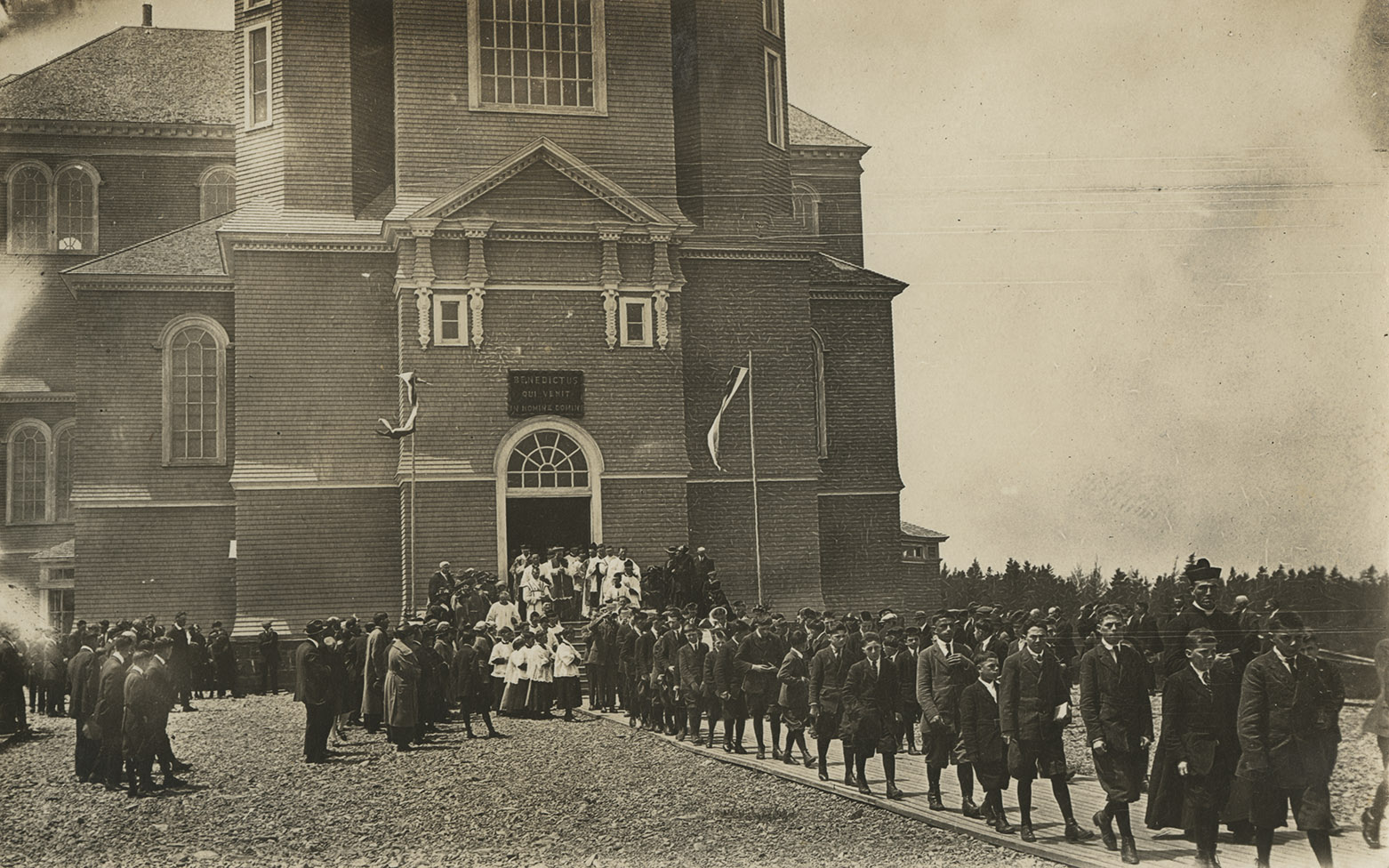 Home of the largest wooden church in North America

St. Mary’s Parish is almost centrally located in the district of Clare, a stretch of land which borders St. Mary’s Bay from Weymouth to Beaver River. This area is commonly called “the French Shore”. The first settlers were Joseph Dugas, his wife and young daughter Isabelle. The following year, 1769, they were joined by a group of families coming from Massachusetts, all of them deported Acadians who arrived after a long journey by foot.

The first chapel in the St. Mary’s Bay area was built in 1774 according to plans specified by Father Joseph Mathurin Bourg, the first Acadian priest to visit the new settlers. Grosses Coques was chosen as the site since this village was the population centre at the time. This rectangular-shaped chapel, with only 100 feet of surface area, one door, two openings serving as windows and walls covered with irregular joined planks, was simplicity in itself.

Father Joseph Mathurin Bourg, visited St. Mary’s Bay area twice after 1774. Following his last visit in 1786, another chapel was erected on a point of land which stretches into the Bay; therefore the name “Church Point”. This chapel was built in Church Point because the population had increased more to the south. It consisted in a narrow rectangular building, almost identical to the chapel of 1774.

The 20th day of June 1799 marked the arrival of the first resident priest, Reverend Jean-Mandé Sigogne, he was called “Father Sigogne” by his congregation and would lead the parish until his death in 1944. Father Sigogne immediately set to work, he bought a log for 87 cents and, having been a wood turner in France, fashioned the first baptismal font of the parish.

On June 3rd, 1803, Mgr. Pierre Denaut, bishop of Quebec, arrived by boat on the shores of St. Mary’s Bay, the first bishop to visit this area. During the three days he spent here exercising his Episcopal functions, he pointed out the site and dimensions of a new church to be built: the most convenient site, east of the main road on a piece of land belonging to the parish. An additional acre of land was set aside for a cemetery. The dimensions of this church were: 60 ft. (18m) long, 32 ft. (9.7m) wide, the walls 16 ft. (4.8m) high and the vestry 10 ft. (3m) by 15 ft. (4.5m). The 8th of June, 1806, construction began and it was completed January 13, 1808. Blessing of the church was held May 1st of that same year. This church was so large compared to the others that it was called the “Grande Eglise” (the big Church) and it is still referred to as such.

On September 10th, 1820, a fire was started in Little Brook and burned uneventfully until the 12th when the wind changed direction. This change of wind direction caused the fire to burn with furor towards the village of Church Point and burned everything for almost 4 miles (6.5km). In the end, 18 houses, 23 barns, the church and the rectory had all been engulfed by the flames. Only two houses were left standing. After this devastating event the community spent the years between 1820 and 1829 rebuilding, including the church and rectory.

The new church completed in 1829 served until 1903 when construction of the present church was begun under the direction of Father Pierre-Marie Dagnaud who had become Pastor of the parish in 1902. The blessing of the cornerstone took place at 10:00 a.m. on June 19, 1903, at the north-east corner of the building. The blessing of the completed church was held two years later, in 1905. This Church has ever since been recognized as the largest wooden church of North America.

This masterpiece of carpentry was erected by Leo Melanson, a master carpenter of Little Brook, under the guidance of Father Pierre-Marie Dagnaud, with the collaboration of all the parishioners. Mr. Melanson, builder of many churches, could not read or write but could follow plans prepared by Mr. Arthur Régnault, a French architect from Rennes, France, and he improvised and adapted them where need be. It is important to note that the plans were drawn based on the design of the stone church in Father Dagnaud’s hometown of Bain-sur-Ouse, France, and had to be converted to adapt to the construction of a wooden structure.

Built in the form of a cross, this building is completely made of wood. It is 190 feet (58m) in length and 135 feet (41m) in width. The ceiling is 63’3’’ (19.3m) high, while the steeple rises 185 feet (56.4m). Forty tons of rocks have been placed in the bottom of the steeple to act as ballast against being continually rocked back and forth by the winds that are characteristic of St. Mary’s Bay.

Today the church is a living museum with two exhibit rooms dedicated to artifacts and relics of days long past. Throughout the church there are interpretive panels which tell the story of the parish and the church itself. The museum was established in 1969 in a small room in the back.

In 2000 it was expanded to include the whole church and a gift shop was added. The church is open to visitors from mid-May to mid-September and by appointment the rest of the year. It continues to be used by the parish for all types of religious ceremonies and Université Sainte-Anne holds its convocation ceremonies in it every year.

The scrapbook selected for the Community Albums project traces the history of the parish and documents the construction of the church as well as some significant events, such as the consecration of Bishop Mgr Albert Leménager and the ordination of Fathers Maximin LeBlanc and Elie LeBlanc, which have been held in the parish.